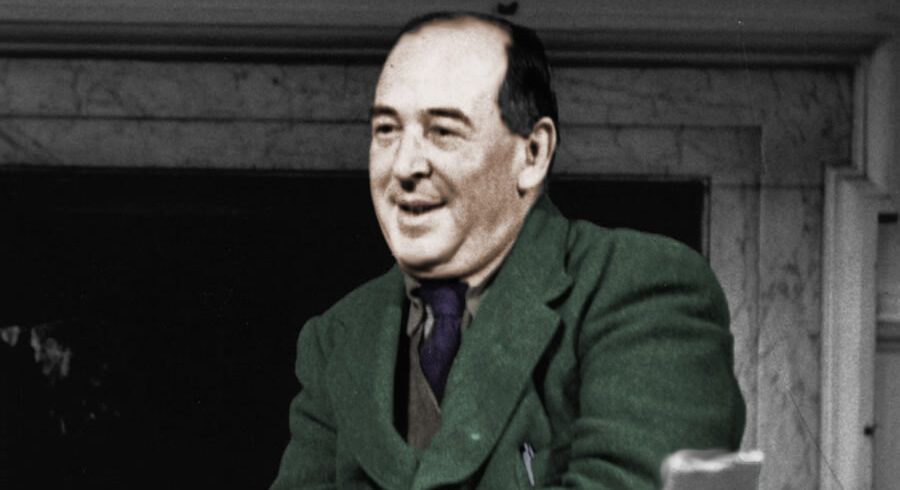 By Dwight Longenecker Published on November 21, 2020 •

As Europe was reeling from the aftermath of the Second World War, C.S. Lewis was taking part in a conversation in the English papers about the possibility of progress. As usual, Lewis cut through both the vague optimism of the progressives and the sour negativity of the pessimists.

The Possibility of Progress

In reading his thoughts in Is Progress Possible — in the collection of his essays called God in the Dock — I came across a remarkable prophecy. Lewis was analyzing the state of mind of so many in post-war Europe. Many were homeless, their livelihoods destroyed and their lives fractured by the war.

When Lewis was writing in the early 1950s Britain was limping along with widespread poverty, rationing of food and an ongoing social crisis. He recognized that the government would have to step in to provide for the people, but he feared the result would be the loss of freedom.

The Power Behind the Throne — Modern Science

Furthermore, Lewis observed that the ruling power in the brave new world would neither be God nor kings who were supposedly divinely appointed. Neither would it simply be power hungry politicians. Instead Lewis thought the power behind the throne would be modern science.

I dread the government in the name of science. That is how tyrannies come in. In every age the men who want us under their thumb, if they have any sense will put forward the particular pretension which the hopes and fears of that age render most potent. They ‘cash in’. It has been magic, it has been Christianity. Now it will certainly be science.

Lewis was not denigrating science as such. He was warning of a society in which science provided the ruling belief system behind the power. Why was science a frightening dark Lord? Because those who have science as their underlying ideology are also utilitarian in their views. That is to say, they will choose the scientific, efficient, cost-effective and surgical or chemical solution to problems.

Not a Dream, but a Nightmare

In his novel That Hideous Strength Lewis told the story of an England in the grip of a cabal of scientific, atheistic globalists, planning to dominate humanity. Their planned utopia turns out to be not a dream, however, but a nightmare. Lewis knew that a society driven only by scientific advancement would be a nightmare because individuals would become pawns in the power games. They would be used, abused and disposed of without a second thought.

Without belief in the human soul there is no reason to recognize innate value in each human being. Those who have science as their one Lord and Master will invariably take pragmatic decisions; thus abortion, euthanasia and abuse of the elderly, the disabled and the poor and even genocide will all be rationalized. All it requires is that the “final solution” be quick, easy and painless.

The Ultimate Tyrant Is the Application of Science: Technology

Lewis’ insights were wise, and easy to understand at the time. Still, what is amazing is his understanding that science on its own would not be the tyrant of the future. Instead the ultimate tyrant would be the application of science: technology.

After the grim reality of the atom bomb and the suffering in the postwar period, Lewis faced mankind’s dilemma squarely:

We have on the one hand a desperate need: hunger, sickness and the dread of war. We have on the other, the conception of something that might meet it: omnicompetent global technocracy.

Caught Up in the Web

When I read these words my heart skipped a beat. Is this not what we are facing in these days, with our reliance on high technology in every aspect of our lives? Rod Dreher’s new book Live Not By Lies analyzes our dependence on tech and the control the tech giants already have over our lives. With computer tracking and spying, data collection, censorship and financial control, we’re already caught up in the web more than we realize.

Is this not the ideal opportunity for enslavement? This is how it has entered before; a desperate need in one party, a power to relieve it in the other. In the ancient world individuals sold themselves as slaves in order to eat … Perhaps the terrible bargain will be made again. We cannot blame men for making it. We can hardly wish them not to. Yet we can hardly bear that they should.

C.S. Lewis’ prophetic insights should serve as a warning. Already most of us are ensnared in the web of the global technocracy in one way or another. What is the way forward? How do we use the wonderful advances of technology without being enslaved by them? How do we establish proper checks and balances to the techno-overlords so their wizardry serves our freedoms and does not enslave us? When do we say enough is enough, turn off the gadgets and pull the plug?

Dwight Longenecker is a Catholic priest working in South Carolina. His latest book is Immortal Combat: Confronting the Heart of Darkness.

We Know Moral Truths Better Than We Know Many Scientific Claims