Speaking at the beginning of World War II, when England was in mortal danger, he tells us what to do when the world is falling apart, just like ours. 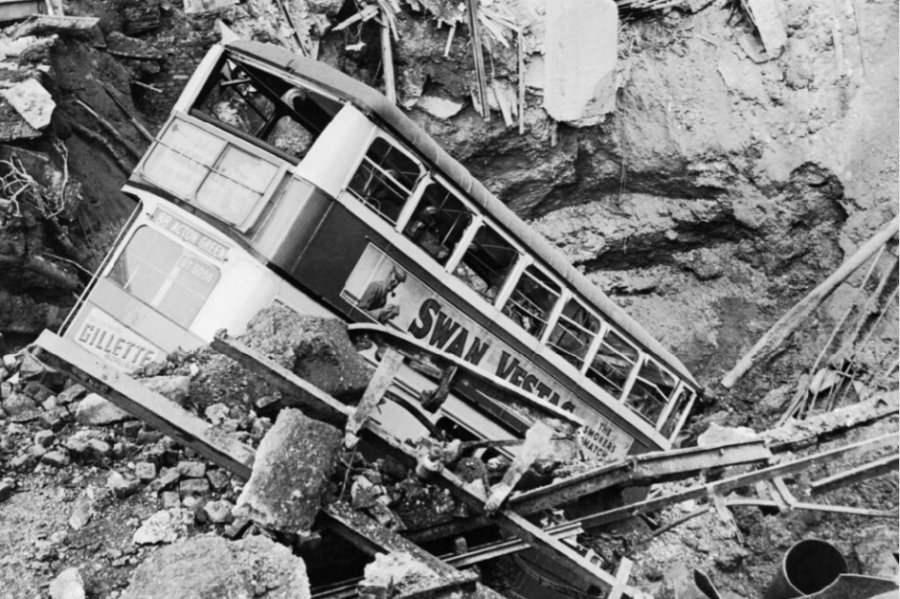 A bus lies in a crater on a London street, having crashed into it during a German bombing.

What C.S. Lewis told the people gathered that evening in autumn 1939, at the main Anglican church in Oxford, he could tell us as we face a world falling apart. England had just declared war on Germany. Germany might kill European civilization and tens of millions of people to get what it wanted. In a year or two, barbarian Germany might conquer England, after half-destroying it first.

Everyone sitting in front of him might soon be dead or enslaved. What does the Christian do in a world falling apart? A world like ours?

Why, he asks, should anyone keep studying when the world’s in such horrible shape? He was talking to academics and that’s the practical question they had to answer. We have to answer others. Titled “Learning in War Time,” the sermon appears in the small book The Weight of Glory. (He wrote more about this nine years later in “On Living in an Atomic Age.” See the quote in the first comment.)

For more wisdom from C.S. Lewis, see this article on his view of saints, which includes links to other articles.

Lewis drove home the problem. Why sit in comfort with your books when you or your friends may go to war at any moment? And maybe die? When your country itself might die? How can you justify studying ancient Greek grammar when you could be fighting the enemy or working on the assembly line making fighter planes and tanks?

We should ask the same kind of questions. What do we do when our world falls apart? When death becomes likely than it was before? When we’ll suffer in other ways and our lives may change forever?

Keep doing what you’re doing, Lewis said — as long as you’re doing something worth doing. Do it better and do it as your service to God.

But he says it with a twist. War, infectious viruses, they don’t change things. The world’s in crisis, but it’s always in crisis. We always have something better to do.

We just see that a lot more clearly now, he explains. “The war creates no absolutely new situation: it simply aggravates the permanent human situation so that we can no longer ignore it. Human life has always been lived on the edge of a precipice. Human culture has always had to exist under the shadow of something infinitely more important than itself.”

The Christian, he says, “must ask himself how it is right, or even psychologically possible, for creatures who are every moment advancing either to heaven or to hell, to spend any fraction of the little time allowed them in this world on such comparative trivialities as literature or art, mathematics or biology?”

Lewis asked his comfortable academic peers a very good question. We must answer it too. Most of us live in some comfort, able to do much of what we want to do, while the world around us lives in great need.

Why keep reading that book on a Christian hero when people suffer in the nearest hospital without anyone to visit them? How can you host that cookout for your friends when the soup kitchen downtown needs volunteers? Do you really need to go to that church conference (back when we could do that) when the fee would feed an African village for a week? Should we enjoy a movie when we could be telling people about Jesus?

You think of the Cross. Jesus orders us to take up our cross and follow Him. “When Christ calls a man, he bids him come and die,” said the Lutheran theologian Dietrich Bonhoeffer. We all fall short.

How does Lewis answer his own question? He doesn’t say this directly, but I’d sum up his teaching this way: You must serve God with all your heart and soul and mind, but part of serving God is living a normal human life. You must take up your cross and follow Jesus, but you take up that cross in and through that life.

First, Lewis says, keep doing what you have been called to do, remembering that you’re part of a body of people who do different things. We are “differentiated members,” he says, “each with his own vocation.” We serve God best through our vocation, not by taking up someone else’s. By doing what we’re supposed to do, “we are either advancing to the vision of God ourselves or indirectly helping others to do so.” How God uses our work we probably can’t see and anyway it’s up to Him.

Second, you’ll do it anyway, so do it well. Speaking to his fellow scholars, he says: “If you don’t read good books, you will read bad ones. If you don’t go on thinking rationally, you will think irrationally. If you reject aesthetic satisfactions you will fall into sensual satisfactions.”

That said, you do it for others. “Good philosophy must exist,” for example, “because bad philosophy needs to be answered.” The Germans may be bombing England, but someone in England will be preaching poisonous nonsense and hurting human souls. Someone needs to know what to say in response. That someone needs to be studying when others are on the assembly line making fighter planes.

Third, God created and honors normal human life as long as we do what we do for Him. That’s the crucial thing that separates just enjoying ourselves from enjoying ourselves as God wants us to do. Lewis invokes the Apostle Paul: “St. Paul tells people to get on with their lives. He even assumes that Christians may go to dinner parties. … Our Lord attends a wedding and provides miraculous wine.”

He quotes the Apostle’s rule that whatever we eat or drink or do, we do it to glory of God. “Christianity does not simply replace our natural life and substitute a new one: it is rather a new organization which exploits, to its own supernatural ends, these natural materials.”

We Can Always Push Ourselves

Lewis says a lot more in the sermon. It must have taken at least 30 minutes to read, maybe 40. I would add one thing to what he says to his fellow scholars. As you can, do go to the hospital, the soup kitchen, give up something for the African village, tell people about Jesus. Lewis isn’t saying just brighten the corner where you are.

But do brighten it. We can almost always push ourselves a little beyond what we do at the moment.

Here’s a small example, good for the summer, even if social distancing requirements make it harder to do. Lewis mentions dinner parties. A cookout can be held to the glory of God. You bring people together in fellowship.

That’s great. But even greater, make it a bigger fellowship, by inviting the odd and isolated and awkward. Don’t tightly “curate” the guest list. You glorify God by helping his lonely children find friends. We defeat the darkness by bringing light to other people’s lives.