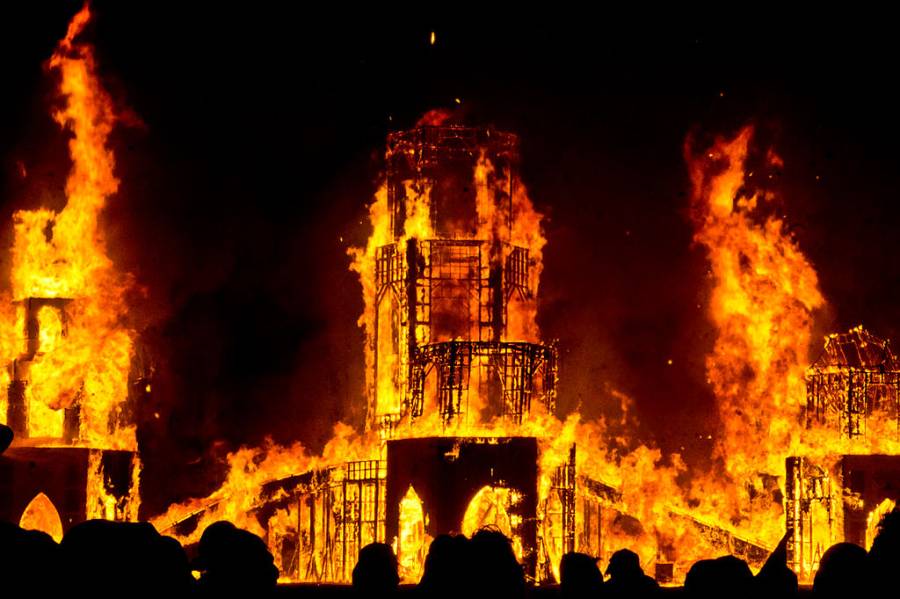 The 2nd Annual Impeachment Trial of Donald Trump is underway. Donald Trump isn’t even in office anymore but you’re going to hold a trial to remove him from office? Sure.

Democrats got such an ecstatic thrill last year they’ve decided to make impeaching Trump a yearly thing. Something to span the gap between football’s end and baseball’s beginning. Like Spring Break, only with less booze and more obnoxious behavior, from people old enough to know much better.

Or a Burning Orange Man festival, where once each winter, a hundred-foot Orange Man Bad figure is made out of rotted sticks, and set on fire by a bunch of liberals high on power.

Actually, There is a Pagan Element to the Impeachment

Come to think of it, there is a pagan-esque quality to the annual impeachment ritual. A superstitious rite to try and rid the village of a force they cannot control and do not understand.

How else can you explain desperately trying to remove someone who is not even there? Trying to hang a ghost.

Your only choices are primitive mysticism or utter madness.

Franklin Graham on the “Evil Hypocrisy”

Perhaps Franklin Graham would benefit from looking at the impeachment from this perspective. In a Gab post this morning, Graham wrote:

I don’t understand why there’s so much hatred for a president who did so much good for our country and did exactly what he told the American people he would do. There’s nothing in the Constitution that allows them to do this—they’re just making the rules up as they go.

In fact, Trump foes hate him because he did do so much good for our country and did exactly what he told the American people he would do. His record puts them to shame, and raised our expectations. They deeply resent that.

But the frothy-mouthed impeachment obsession goes beyond politics and into otherworldly realms. That’s why the voodoo-like chants for impeachment began before Trump was inaugurated and continue now even after he’s gone. It’s why the Dems were so willing to race right past the Constitution and impeachment precedent — both times. Why Trump was impeached over a phone call.

Why the House rushed to this irrational effort before the evidence on what happened January 6th was gathered. Why the House impeached Trump for inciting a riot despite him calling for “peaceful and patriot” demonstrations. Despite offering to deploy 10,000 National Guard troops before the rally. Despite the fact that authorities knew Antifa was going to be there to stir up trouble, and video proof that anti-Trump radicals incited violence.

And despite the indisputable fact the riot was well underway before Trump was anywhere near finished speaking. Orange Man Bad is a mythic creature whose powers traverse time.

The Terror of the Unknown

Graham again puts the Democrats’ plans in political terms: “It’s obvious that Donald Trump‘s enemies are terrified that he might have a political future that would threaten their positions and their agendas.”

“Terrified” is the right word. But their actions go beyond reason into a state of primal fear. In an ancient echo of “The gods will come and again curse our crops,” “Orange Man Bad might return!”

But didn’t they just tell us that Orange Man Bad was legitimately defeated by a weak and fading rival who didn’t even campaign and nobody was enthused about? How can he possibly be a threat in a future election?

In fact, isn’t their stated basis for this impeachment Trump’s “baseless” consistent claims he was cheated?

Graham seeks rationality where none is to be found. And like the Chimu sacrifice of children and llamas, the scapegoating ritual must take place. Regardless of the cost. The compulsion too strong. The need too dark and deep.

The driving force behind the impeachment isn’t Democrats and politics, but spirits and superstition, principalities and powers. Which is why we must join Franklin Graham when he pleads, “Let’s pray for our country and our leaders today.”