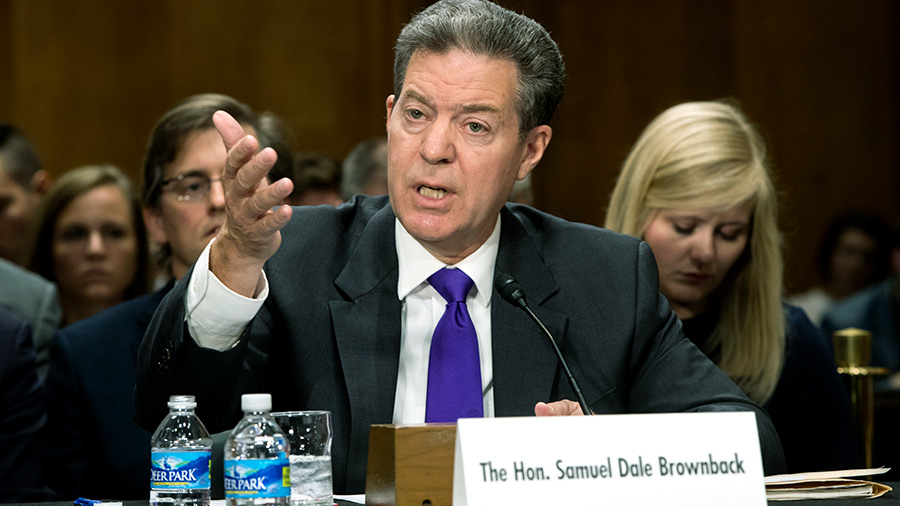 Samuel Brownback, governor of Kansas and a former U.S. senator, appears before the Senate Foreign Relations Committee as the nominee to be the United States Ambassador-at-Large for International Religious Freedom, at the Capitol in Washington, Wednesday, Oct. 4, 2017.

It represented a major step in his expected confirmation as Ambassador at Large for International Religious Freedom. The role advocates for people denied liberty on the basis of religion. “This is one of these fundamental human rights,” said Brownback, extolling the freedom of religion. “If it starts to penetrate further around the world, you’re going to see more peace break out in places.”

Committee Chairman Sen. Marco Rubio (R-FL) opened the hearing. “Any cursory glance around the globe will reveal daily assaults on religious freedom,” he said. “That’s why a robust American engagement on behalf of the beleaguered faith community is an urgent need. Governor Brownback has been a longtime champion of the issue of religious freedom globally.”

Prior to his two terms as governor, Brownback was known for his leadership on human rights issues during his 15 years in Congress.

Also facing questions at the hearing was Michele Jeanne Sison, nominated as the U.S. Ambassador to Haiti. Sison has three decades of experience in foreign service. She emphasized how she would work closely with the Haitian government from the U.S. Embassy in the capital city of Port-au-Prince.

Sen. Tim Kaine (D-VA) was Hillary Clinton’s running mate in the 2016 presidential election. He first reminded Rubio what happened following his loss. “The day I got back from a wild, 105-day ride in November of 2016, you and I introduced a bill about combating anti-Semitism around the globe,” he said.

“I really am thrilled to have both these nominees who have strong public service track records,” stated Kaine.

Nominated two months ago by the Trump administration, Browback’s eagerness to begin his new role was apparent. “You’ve got to have a passion about these things to be able to stick with it the length of time it takes to get them done,” he said. “If we don’t have religious freedom around the world, you’re going to see the continuation of many conflicts like we have today.”

Senator Cory Gardner (R-CO) challenged the nominee on his grasp of global issues. He brought up how Christian aid group Compassion International has recently been forced to shut down operations in India. “Compassion has been in India since 1968,” he began. “Compassion provided health, nutrition, medical services and tutoring to over 145,000 children.”

“In April 2015, [India] revoked the licenses of nearly 9,000 charitable organizations. What can we do to help change this situation?” he asked.

“This is something we’ve got to press them on and we’ve got to press hard,” said Brownback. “India has, in the past, had a very good track record overall. It’s a very religiously diverse nation. I don’t know what’s causing this. But I pledge to you my word to press India to be a government that honors religious freedom for everybody.”

Tensions rose in the next exchange. Kaine began, “In 2015, you issued an executive order retracting an eight-year executive order in Kansas.” He further implied Brownback would uphold discrimination against state employees on the basis of sexual orientation.

Brownback stated his reversal of the previous executive order was in deference to state legislators. “This [created] a right for state employees that wasn’t available to the rest of the people in the state,” he said.

“I just don’t think it’s a right the executive branch should create without the legislative branch,” he continued. “I look forward to working with everybody, regardless of their ideas or views, on how we can advance the agenda of religious freedom.”

The two sparred for several minutes on the question, as reporters live-tweeted Kaine’s repeated inquiries. “I would continue the policies that have been done in the prior administration in working on these international issues,” replied Brownback.

“Religious freedom is one of those topics this body has worked to keep bipartisan … it’s had a strength some other issues tend not to have.” — Kansas Gov. Sam Brownback

Senator Jeanne Shaheen (D-NH) refocused the hearing on people overseas in crisis. “The United States was founded because people were fleeing religious persecution,” she began. She spoke of Indonesian immigrants who may be deported from her home state. She asked: “What kind of message do you think that sends to the rest of the world?”

“I am very sympathetic to people fleeing a plight because of religious persecution,” Brownback answered. “I believe in the fundamental right to practice religion as you see fit.” He spoke of the Karen people of Myanmar, a religious minority group whose plight was dramatized in the recent film All Saints. He continued, “They were being trafficked into Bangkok, into a number of prostitution places.”

Brownback then referred to the International Religious Freedom Report, which notes the persecution of Muslims is on the rise. “That’s wrong! It should not take place. I will stand up and fight for those communities, as I have in the past.”

Shaheen also brought up women’s health services. Brownback sidestepped any mention of his pro-life record as Kansas Governor. “There are contentious issues people don’t agree on,” he said. “Religious freedom is one of those topics this body has worked to keep bipartisan. Because of that, it’s had a strength some other issues tend not to have. This position stays in the lane of religious freedom.”

The U.S. Senate is expected to vote in the coming weeks to confirm Brownback and Sison to their new positions.