The issue is not merely that liberals don't understand "Red America's" attachment to the Second Amendment. It's that many liberals refuse to understand. 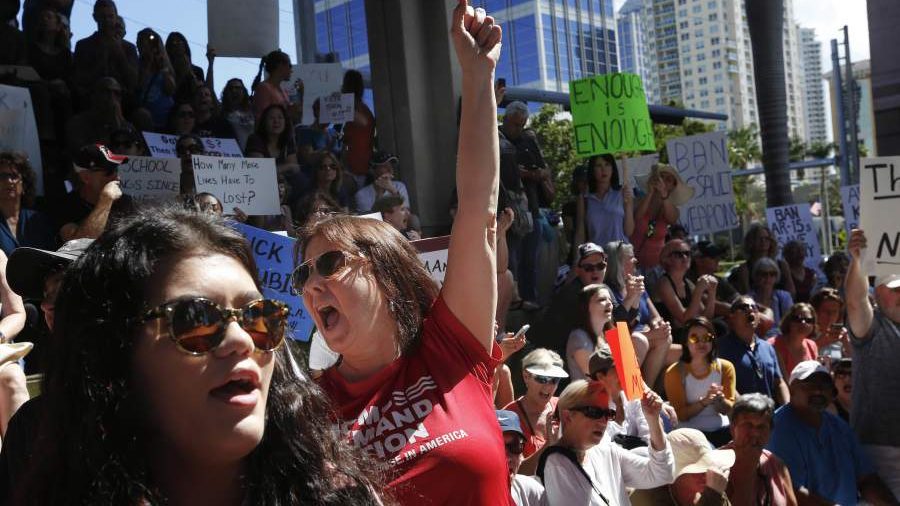 Helena Moreno, center, yells during a protest against guns on the steps of the Broward County Federal courthouse in Fort Lauderdale, Fla., on Saturday, Feb. 17, 2018.

The response to David Brooks’ Monday column in The New York Times is a prime example of why we can’t get anywhere when it comes to gun legislation that might actually stop crime. Brooks makes a salient point when he writes: “The people who defend gun rights believe that snobbish elites look down on their morals and want to destroy their culture.” If the elites tell them

they and their guns are despicable, they will just despise us back and dig in their heels. So if you want to stop school shootings it’s not enough just to vent and march. It’s necessary to let people from Red America lead the way, and to show respect to gun owners at all points. There has to be trust and respect first.

You’d think Brooks suggested inviting ISIS fighters out to lunch, judging by the reactions on Twitter. Here are some of the most heated responses.

From the editor and founder of Think Progress:

In which David Brooks argues that when 17 people get gunned down in a high school the most important thing is to be polite and deferential https://t.co/eskBvnyZLh

From a New Yorker staff writer:

on guns, david brooks proposes a bridge to nowhere — with lots of safe spaces along the way for gun owners to feel unthreatened while the people who don’t like being shot dead apologize for antagonizing them by advocating for life-saving policies https://t.co/D5xja7B5KY

From a writer and comedian:

Red America led us into unending wars, a financial crisis, a reality show @POTUS, and the gun deaths of children.

We're done following their lead. We're leaving that path and marching straight to the polls.

From a contributor to The Onion, The New Yorker, and other publications:

"Won't someone please think of the murderers?!!"
-David Brooks response to a school shooting

Other responses were too vulgar to share. Just search “David Brooks” on Twitter to see for yourself. These responses prove Brooks correct when he writes that “we don’t really have policy debates anymore. We have one big tribal conflict.”

The issue is not merely that liberals don’t understand “Red America’s” attachment to the Second Amendment. (David French articulates this difference of understanding well.) It’s that many liberals refuse to understand.

Red America wants to see mass shootings end as much as anyone. Duh. But we have reasons — backed by compelling research — to believe “gun control” as liberals advertise won’t work. As I pointed out last week, multiple factors could be contributing to the frequency of such shootings. Gun control won’t affect many of them.

To many on the left, that doesn’t matter. They’ve latched onto “gun control” as the one and only solution that will prevent gun violence. They refuse to look at any evidence suggesting otherwise.

Liberals have latched onto “gun control” as the one and only solution that will prevent gun violence. They refuse to look at any evidence suggesting otherwise.

I experienced this last week in an exchange with another Twitter user. I tweeted that focusing on gun control causes us to ignore other factors causing mass shootings. He called me complicit in the murder of children. So I shared multiple articles containing data backing my position, politely asking him to take a look. For most of the exchange, he responded with variations of “I’m not interested” and “there’s nothing to discuss.”

That was just one user on one social media platform. But it’s emblematic of our culture on the gun issue. We on the right say, “Hey, we want to stop school shootings too! But we have some evidence that what you’re proposing won’t work.” The left says, “Not interested. And by the way, you’re basically a murderer yourself, because you don’t agree that gun control is the one and only answer.”

There are glimmers of hope. I’ve seen articles from people on both sides willing to work with political opponents. On Friday National Review’s David French proposed a solution that would keep guns out of the hands of those deemed a threat, but not punish all gun owners. The same day Isaac Bailey, member of The Charlotte Observer editorial board, suggested an abortion restriction-gun control compromise.

I can’t say I agree with either proposal. I’d have to research and hear more details. But I was encouraged to see level-headed suggestions reflecting a willingness to work together.

Another glimmer of hope came when I perused the comment section of Brooks’ Times column. In one comment “Ellen Thomas,” a self-identified liberal, described an enlightening conversation with her Republican friend after the Parkland shooting. (Good for her for seeking out an opposing viewpoint.) Thomas writes:

I think that those of us who lean toward restrictions on guns must stop making any proposals at all, and simply ask Republicans and the NRA what their solutions are. Currently, they don’t have to have solutions at all — they only have to play defense.

It’s not true that the right doesn’t have solutions. It is true that liberals’ refusal to listen prevents those solutions from going anywhere.

Brooks is right. Before we curb mass shootings, we need more mutual respect and willingness to listen. It should go without saying that those of us on the right must be willing to listen to liberals as well, and even look for areas to compromise without sacrificing our convictions. We can’t prescribe what we’re not willing to take.

But there is no question that when it comes to the gun debate, liberal hysterics are a big reason we can’t move forward. And unless that changes overnight, we have a long way to go.