Boys Will Be Men. But What Kind of Men? 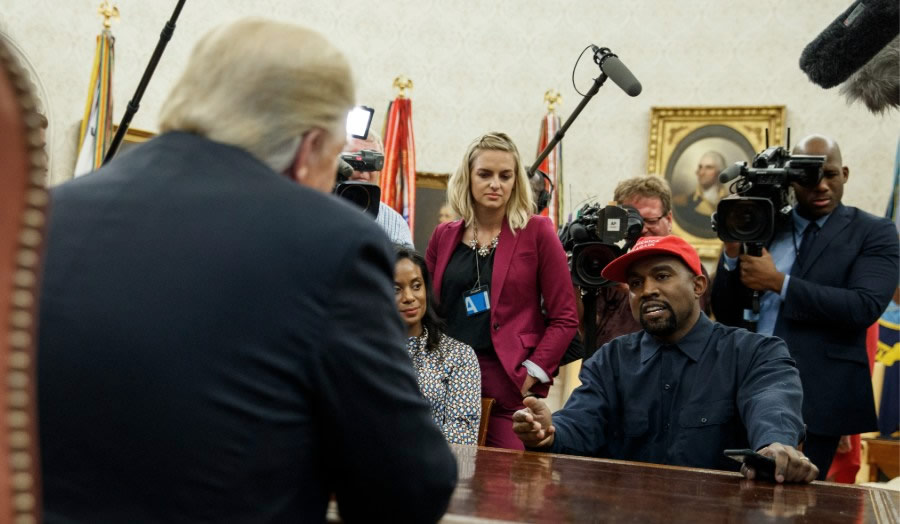 Rapper Kanye West speaks during a meeting in the Oval Office of the White House with President Donald Trump, Thursday, Oct. 11, 2018, in Washington.

I was just out of college, living in a crummy rented room outside Boston when I got a letter from my father, addressing an unpleasant disagreement I’d had with my mother. At some point in his fatherly peace-making effort he wrote the sentence: “You are a good man.” In my mind I can still see the sentence, in the distinctive handwriting of my Greek immigrant father. Because he was himself such a profoundly good man, his words struck me with surprising force, and I was instantly choked up.

I didn’t really think of myself as a “man” at the time. In the mid-80s, the PC culture at places like Yale, from which I had recently graduated, had already cast “manliness” as a pejorative. To aspire to “be a man” — or a “good man” or a “gentleman” — was to brazenly resist the frog-march lockstep of that time and place, and few did. But my father’s words did an easy end run around my cultural indoctrination and I awoke as from a trance.

Though I didn’t understand it, I see now that I had just received what amounted to my father’s blessing. It was as if he had said those words with his dying breath. He had given me something incalculable, something that would carry me through innumerable difficulties over the decades.

So when I heard Kanye’s comments in the White House, I remembered my father’s words. Kanye spoke for millions when he said, “You know, my dad and my mom separated, so I didn’t have a lot of male energy in my home.” The growing deficit of fathers is an American tragedy, but as the painful statistics show, it is particularly so for young black men. Is it, then, so surprising that Kanye might long for a father figure, or that he might see one in the Alpha male that is our president?

But Kanye’s next sentence pointed to something more. “And also,” he said, “I’m married to a family that, you know [laughs] … not a lot of male energy going on.” And right there, for any who caught it, was the queasy-making maraschino atop it all, the reminder that the step-parent-in-law of Mr. West had once been the superman decathlete hero of numberless boyhood sports fantasies — now remade as a self-proclaimed woman. It was such a bizarre fillip that many missed it, or chose to ignore it.

The recent attempts to deconstruct and banish that most fundamental of all categories, male and female, is a vital piece of the fascinating cultural puzzle at issue. For most Americans, it is a preposterous sideshow they will take seriously the moment a rooster lays an egg. Still, for men longing to become the men they were created to be, it is a very serious matter. The media’s fawning approval of all things LGBTQ and #metoo deliberately ignores the honest questions of these men, as though they might simply be glowered into silence. We have often said that boys will be boys, but we cannot forget that in the end, boys will be men. That is the real issue, and what kind of men is the real question.

Might wildness, and unshirted manliness too, have another side — a non-toxic one that we have erred in forgetting, in failing to accept and celebrate?

We cannot will away such concerns by cultural fiat or premature legislation. They will come back to haunt us and are already doing so in countless ways. We might recall the lesson of H.G. Wells’ eerily prophetic The Island of Doctor Moreau to see that mere scalpels cannot overcome the deep nature of things as they are.

And so it is out of this deepest of fissures in the cultural rock — as though called forth by the father-hunger of millions like Mr. West — that there has emerged something like a caveman, a figure so unapologetically male that through our smudged cultural filters he appears to many impossibly vulgar and offensive. Even worse, he seems quite unconscious of this. He is strangely — almost bizarrely — untouched by the new cultural rules. He is a throwback, often wielding a club of harsh words. But in a culture bleached of such red-blooded manliness, his appearance is as refreshing to some as when a pageant beauty appeared with Bob Hope on the deck of a battleship. Many throw their hats in the air and cheer.

Some of us may remember when the children in C.S. Lewis’s Narnia books ask whether the fearsome lion Aslan is tame. “He is not tame,” they are told. “But he is good.” Might wildness then, and unshirted manliness too, have another side — a non-toxic one that we have erred in forgetting, in failing to accept and celebrate? Might not young men without fathers long for this? Those who adore our mothers know that even the best mother in the world can never be a father.

So what if this president in his retro caveman wildness has somehow made it okay for some men in America to do what they are told they must not — be men. Kanye’s touching vulnerability on this subject touched the hearts of millions who have longed for this. For many, the moment struck a nerve that can somehow never again be unstruck.

But how the cultural mandarins whinnied and reared and goggled their eyes! What of it? Geldings are neither wild enough nor strong enough to drag us from the eternal truths within us, that in order to become men, men need the affirmation of other men. And especially of father figures, wherever they might be found — including, if necessary, in the Oval Office.

My own father’s words thirty years ago changed me forever. They did not say “I love you,” as much as “I respect you.” That manliest of all affirmations is what puts tears in men’s eyes — and puts steel in their spines and courage in their hearts. And no, it is not too much to say that it sometimes makes them feel like Superman.

Eric Metaxas is the author of Donald Drains the Swamp (A Donald the Cavemanbook) and 7 Men: And the Secret of Their Greatness.