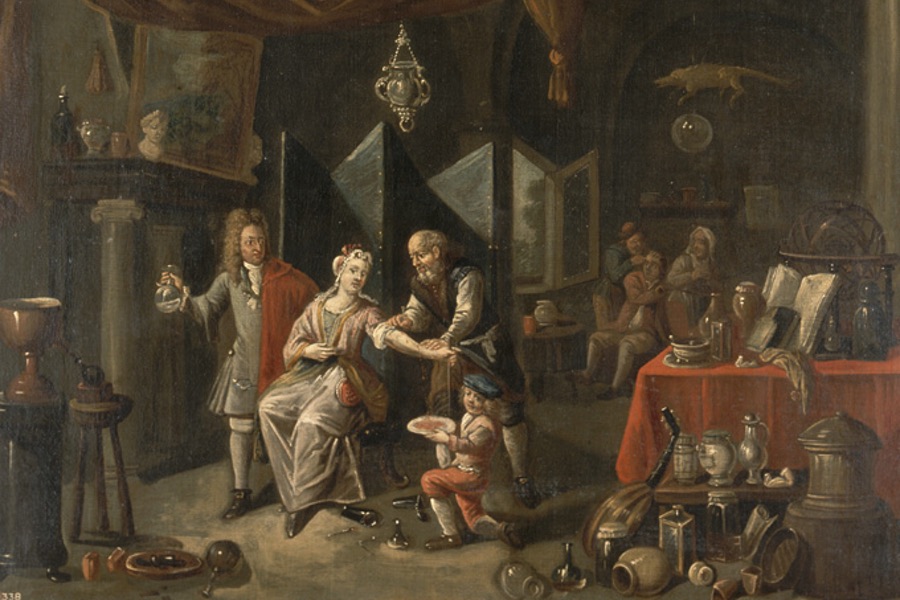 Is that over the top? I wish.

Bloodletting used to to be a main go-to method for treating disease. It meant exactly what the name implies: letting blood out of a patient. The practice goes back to earliest recorded history. The ancient world’s most famous physicians, Hippocrates and Galen, did it. Barber-surgeons (it was all one profession) kept on doing it, well into the 19th century.

In fact for most of history, physicians in the Western world (and possibly elsewhere) have thought bloodletting was a great way to treat disease.

The idea — at least in the classical world — was that disease was caused by an imbalance of the four “humours,” blood, phlegm, and black and yellow bile. Reducing blood volume would restore that balance, they thought. We think it’s barbaric, because we know it did much more harm than good. But George Washington’s surgeons (for instance) didn’t do it out of malice. They just had a badly mistaken view of the healthy human person, and how health can go wrong.

Now we see it as barbarous, so I fear even the mention of it will disturb some readers. There is a point, though. We have a modern bloodletting movement operating today. It even uses the same initials. The analogy with Black Lives Matter is almost perfect.

They’re letting blood, and doing a lot more harm than good with it. It’s truly disgusting, truly horrifying. They really ought to know better.

BLM is a literal blood-letting movement, for starters. It has provoked deadly riots. But the connection is even closer than that. I see two strong parallels: First, it’s born out of a mistaken view of humanness. Second, that mistaken view leads to doing more harm than good.

It’s not a perfect analogy. It breaks down badly on the level of culpability. The old bloodletters could claim innocence, not having had much reason to know better. BLM activists can’t claim the same.

BLM was born out of Marxism and queer theory. So it sees the ultimate human good as a combination of radical social and economic equality, coupled with unfettered sexual freedom. That, it appears, is what it takes for humans to reach their highest heights.

Meanwhile it’s strangely silent on matters of virtue, other than a simplistic view of justice focused entirely on racism. Even that has nothing to do with action or intention, just skin color. Whites are racist, period. American institutions are systemically racist.

Where in BLM do we hear of virtues like love for all? Of courage? Of humility? Of temperance? Where do we even hear of aesthetic goods like beauty and order? Is there any positive vision of a good family, a good city, a good country? Do they ever even speak of interracial harmony?

BLM leaders want to “disrupt” the nuclear family, as if any good could come from that. They are unabashedly Black-centric — which is fine, to an extent. But when that becomes the only allowable vision of good (as it has tended to do lately), it becomes intolerable for others, and totalitarian for all.

This is not a sound vision of healthy humanness.

We have problems, no doubt. Racial tension is undeniably a huge, divisive issue in America. Blacks and whites do have different experiences, on the whole, a fact we must face just as squarely. But BLM has a wrong vision of the ultimate good we should seek. This leads to a cure that’s even worse than the disease — because it is guaranteed to stoke anger, hatred, divisiveness, and too often violence as well.

The BLM movement wants social and economic equality, and as long as that doesn’t suddenly arise, the solution is to stir up anger over it. This is not a vision of a healthy society.

These activists want racism to end, but they’ve pronounced whites incurably racist no matter what they do. Whites are therefore hopelessly stuck in their wrongness; but hopelessness is no way to motivate real change.

They want to replace existing systems of justice and law, and (based on what we’re seeing in many cities) replace them with street thuggery.

They don’t want harmony, they want payback; and payback will do as much good for community and country as bloodletting did for patients.

Maybe you think, “Bloodletting is disgusting. It’s horrifying! They should have known better!” I answer, Really? How? Up until William Harvey in the early 17th century, we didn’t even know that blood circulates, much less the reason that it does. Those doctors meant well, and we can credit them at least for that, even though their ignorance led them to do great harm in their well-meaning.

BLM has not such excuse. They have Martin Luther King, Jr. as their better example, and they’re undoing a lot of the progress he made toward reconciling the races.

They’re letting blood, they’re doing a lot more harm than good with it, and they really ought to know better. Do you find it disgusting? Horrifying? You should. We all should.