Have a Bleak and Blessed Good Friday 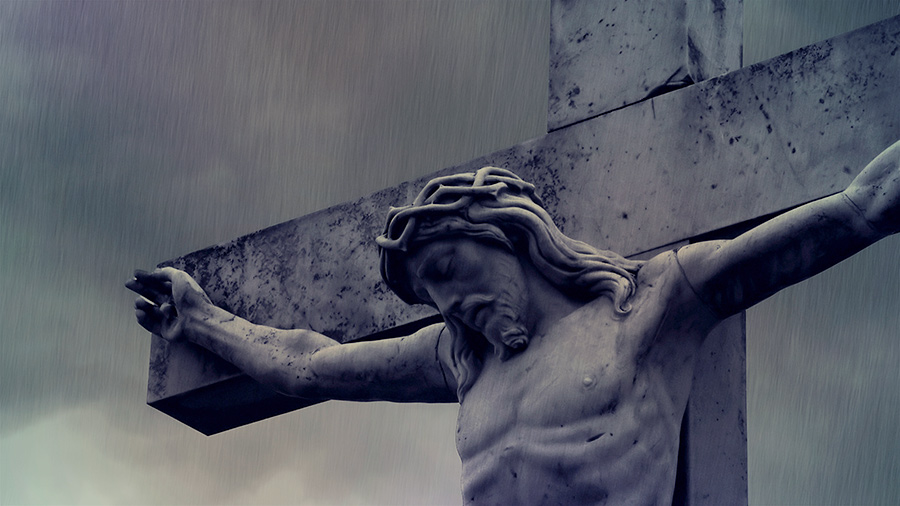 The weakest link in recurring adventure shows, like Daredevil or The Flash, is the lack of real suspense. However fatal the trouble the hero seems to be in, you know that he will survive it. Somehow or other. At worst, he will lose his powers for a while. Or he’ll “die” and get reanimated. I’m sure that writers struggle to keep the story compelling anyway. For us, marking Good Friday carries the same challenge.

It’s all too easy to let this holy day get swallowed up by Easter. We know how things turn out. Death gets swallowed up by victory. Jesus goes down into darkness just for a weekend.

In fact, we know that tomorrow He will be rooting around in Hades to free Elijah and Esther, Abraham and Moses, even schlemiels like Adam and Eve. They will follow Him to glory. So it’s all too easy for us to fast forward through the Passion. Just so, lax Christianity would glide over the darkness of sin, to focus on forgiveness. That’s natural, of course. But then, our nature is fallen.

We should travel the road of these holy days at the same speed as the apostles. It won’t help us to jump ahead.

To really embrace the grace that’s offered by this season, we must master our minds and emotions. We should travel the road of these holy days at the same speed as the apostles. It won’t help us to jump ahead. In fact, it impoverishes everything.

How to Harness Your Mind and Heart on Good Friday

Ignatius of Loyola invented a method of mental prayer. He called it the “composition of place.” It proved so powerful that soon English Protestants — no fans of Jesuits — were adapting it for themselves. (John Donne’s poetry bears its traces.) It’s easy to master and profoundly useful.

Take a Bible passage (for today, the Good Friday narrative) and try to place yourself there. See it through the eyes of one of its participants. Of Jesus, yes, but also of His disciples, the apostles, even His mother, Mary.

Use the five senses God gave us as your starting point.

Go further, and try to imagine John’s disappointment. He too was a Jew, and surely treasured hope for earthly liberation. For an end to strutting Romans and sold-out Sadducees. For a king again in Jerusalem. Whatever John came to believe about Jesus’ broader mission, he surely did hope for that.

How did you feel the last time some crucial battle in the world went against you? Think back to the last bad Supreme Court decision, or evil law enacted. Or just the last time you suffered or witnessed injustice. Remember how it felt to see freedom, fairness, and faith get hammered by worldly powers. That’s a hint of how John must have felt when he heard the Roman troops tramping by, while Jesus hung above, dying.

What Did Simon Peter Think?

Or put yourself in Simon Peter’s place. You have spent the past few months boasting of your faithfulness unto death. But last night you could not even stay awake with Jesus for an hour. Then you pulled out your sword and tried to kill a temple guard. And then, worst of all, when you found that you couldn’t fight. … You turned and fled.

Treat Good Friday as the open casket wake of your best friend in the world. Blot Easter out of your mind, except as a distant glimmer.

You lied, and denied the Lord three times, just as He’d predicted. That cock that crowed marked you for life. From now on, you fear that every dawn will call you out as a coward. Now you skulk on the outskirts of a bloodthirsty mob, unable to tear yourself away, too ashamed to approach the cross.

We Are All Judas, Too

It might even profit to spend some time with Judas. Consider how your own sins helped hustle off Christ to the cross. Remember how little profit or pleasure they really brought you. Like a bag of ill-gotten money, you wanted to give it all back. And you thought your sins might really be too grand for a mere God to forgive.

There are many other witnesses. Spend time with more than one. But don’t read past the verse where the sun dies in the sky. Treat Good Friday as the open casket wake for your best friend in the world. Let tomorrow be watchful and quiet, if you can. Blot Easter out of your mind, except as a distant glimmer. Let it come in God’s good time.

When you walk with the women to the tomb on Sunday morning, you don’t want to miss the surprise: That it is empty.

For Palm Sunday: Deacon Keith Fournier’s Holy Week: Now It Begins, Now It All Begins
For Holy Week: Jennifer Hartline’s Has God Finally Met His Match?
For Holy Week: David Limbaugh’s Good News and the Gospels
For Maundy Thursday: David Mills’sWhy Jesus Washed the Apostles’ Feet, and Why We Do It Too
For Good Friday: Deacon Keith Fournier’s The Connection Between Good Friday and the Church
For Good Friday: John Zmirak’s Have a Bleak and Blessed Good Friday
For Easter day: Esther O’Reilly’s Not Without Witness: An Easter Reflection
For Easter day: David Mills’s Did Jesus Rise? The Extreme Apostle Says Yes, the More Extreme Atheist Says No