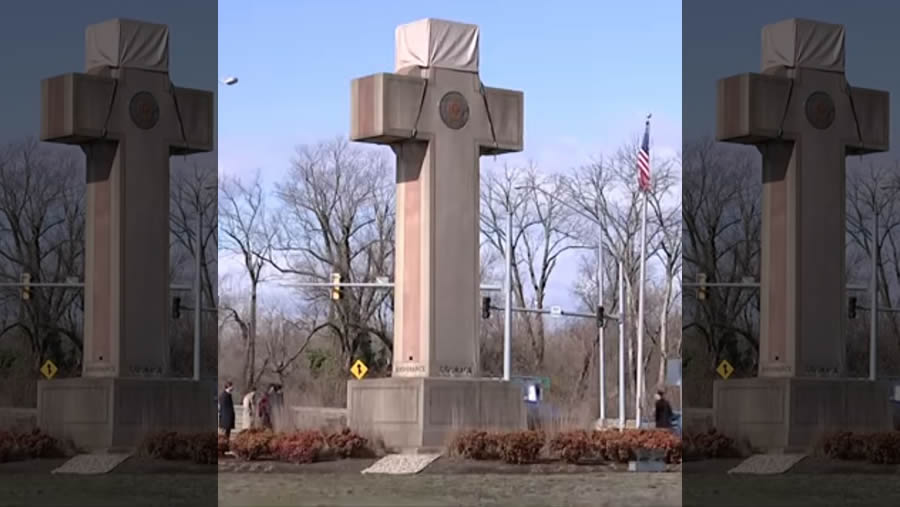 The “Peace Cross” can stay right where it is.

The Supreme Court ruled 7-2 today that Bladensburg’s “Peace Cross,” a World War I memorial in Bladensburg, Maryland, will remain standing. Efforts by an atheist group to tear it down because of the Christian symbolism has failed.

The 40-foot memorial honors the sons of Bladensburg who died during the Great War. Nearly 100 years ago, bereaved mothers paid to have the monument erected. After the money ran out, the American Legion stepped in to complete the project. Later, in 1961, the property on which the cross stands was purchased by a state commission, which pays for maintenance of the memorial. The names of 49 soldiers who died in the War are inscribed on a plaque at the base of the cross.

The Bladensburg Cross not only is on public land but sits at the junction of three main roads in the historic Maryland town.

“The cross is undoubtedly a Christian symbol, but that fact should not blind us to everything else that the Bladensburg Cross has come to represent,” Justice Samuel Alito wrote in the ruling. He added:

For some, that monument is a symbolic resting place for ancestors who never returned home. For others, it is a place for the community to gather and honor all veterans and their sacrifices to our Nation. For others still, it is a historical landmark. For many of these people, destroying or defacing the Cross that has stood undisturbed for nearly a century would not be neutral and would not further the ideals of respect and tolerance embodied in the First Amendment. For all these reasons, the Cross does not offend the Constitution.

Not a Complete Victory … But a Victory

However, today’s victory was not complete.

As Liberty Counsel said today in a statement, the high court “sidestepped” the opportunity to overrule Lemon v. Kurtzman. The Supreme Court ruled in Lemon that a Rhode Island law that paid some of the salary of some parochial school teachers was unconstitutional. The “Lemon Test” was the “Supreme Court’s 1971 framework for deciding religion-state entanglements,” wrote The Washington Times.

“Today the Supreme Court made a common sense ruling that the ‘Peace Cross’ war memorial does not violate the First Amendment Establishment Clause,” said Mat Staver, Founder and Chairman of Liberty Counsel. “Today’s ruling is an encouraging example of the Court returning to the Constitution. … It is disappointing that the Court chose not to overturn the unconstitutional precedent on the Establishment Clause known as the ‘Lemon Test.’ We must return to the Constitution and abandon these unworkable manmade tests.”

This is a great victory after we fought tirelessly to keep the Peace Cross standing in recognition of the valor, endurance, courage, and devotion of our World War I veterans. Today’s ruling ensures that this memorial — a dignified tribute to those who came before us and made the ultimate sacrifice — will stand tall and proud for the ages.

Hogan added, “I was honored to help lead this fight on behalf of our veterans, and I am proud that Marylanders and Americans will be able to visit the Peace Cross in Bladensburg for years to come.”

According to NPR, the American Humanist Association challenged the placement of the cross. They claimed that “there is no meaning to the Latin cross, other than Christianity.” While a federal appeals court agreed, the Supreme Court’s ruling this morning reversed the lower court’s decision.

The Bladensburg cross “has become a prominent community landmark, and its removal or radical alteration at this date would be seen by many not as a neutral act but as the manifestation of a hostility toward religion that has no place in our Establishment Clause traditions,” Justice Alito wrote. He continued:

And contrary to respondents’ intimations, there is no evidence of discriminatory intent in the selection of the design of the memorial or the decision of a Maryland commission to maintain it. The Religion Clause of the Constitution aim to foster a society in which people of all beliefs can live together harmoniously, and the presence of the Bladensburg Cross on the land where it has stood for so many years is fully consistent with that aim.