‘Black Lives Matter,’ ‘No Human Is Illegal,’ and Other Magical Liberal Code Words 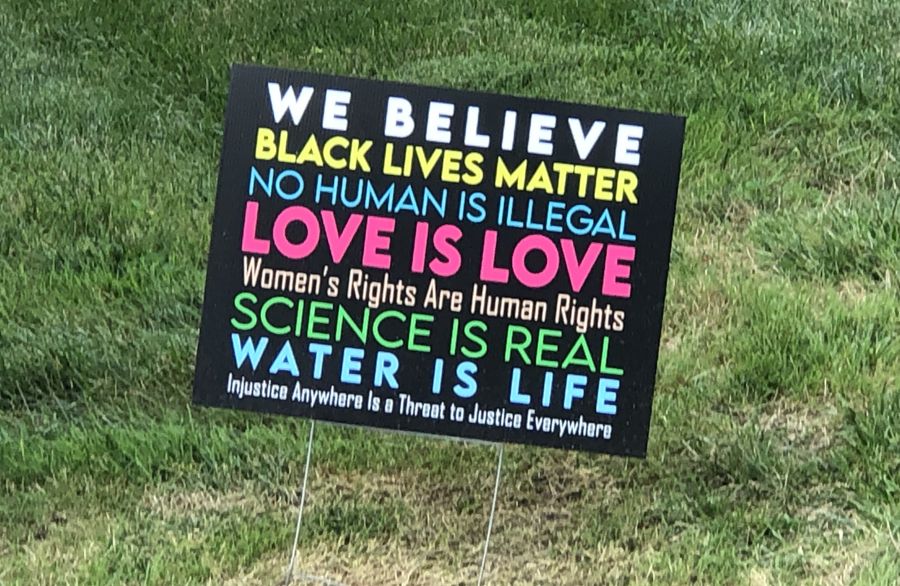 I saw the sign in someone’s yard on the way to the park the other day, and I just had to snap the photo. Already I was imagining the kind of conversation that might go with it. It’d start with me stopping in at the place, knocking on the door, and greeting the young man I can picture answering the door.

“Hi!” I’d say. “You don’t know me, but I really love your yard sign. I’m a columnist and an editor with a conservative Christian website called The Stream, and I really want to thank you for standing up for conservative principles this way!”

You might think he’d kick me straight off his porch for that, but he can’t do that: I’m the one making up this conversation, and it has got to keep on going to be any fun at all. So instead he makes the only sensible response a liberal could make to an opening like that.

Then I begin to explain. “You know, your sign out front? The one that starts out, ‘We believe black lives matter’?”

NEIGHBOR: “Oh, yeah. Sure. That one. You said it was conservative? Listen, mister I don’t know what you’re —-”

GILSON: “Well sure! Every conservative I’ve ever met would agree; we all believe black lives matter! Same with the glorious wisdom of ‘Love is love,’ We conservatives stand for good reasoning, and while you’ve got to admit it’s a bit tautological, at least the logic is beyond dispute. Better than most liberal logic, wouldn’t you say?”

GILSON: “And my goodness, who could disagree that women’s rights are indeed human rights? But you’re really on the right track with ‘Science is real.’ Sounds like you’re well up to speed with the whole academic philosophical debate on realism in science, and you’re lining up with the realists, who by the way tend to be the conservatives. Good job, sir!” 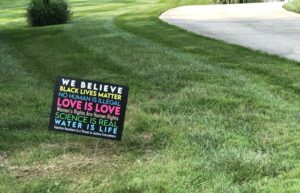 Such a nice yard for such a “conservative” sign.

(I’m never this pushy in real life, but you don’t mind my having fun imagining it for once, do you?)

So I press on.

GILSON: “You’ve got such a great sign out there! ‘Water is life,’ you say? Sure, it’s hyperbolic, but we can live with that. And finally that last line, Injustice anywhere is a threat to justice everywhere.’ I’ve just got to tell you how much I appreciate that: It means you don’t believe all that ‘social justice’ nonsense that’s messing the world up so badly.”

NEIGHBOR: “Okay, now you’ve got me. I can’t just let this go. I’ve heard of ignorant right-wingers, but I never run into one who’d have thought that sign out there was conservative. I’m a progressive, I’m proud of it, and unlike you I actually believe what’s on that sign!”

GILSON: “Really? That’s strange, because I believe what’s on there, too Are you saying one of us is confused here? Like I told you, I’ve never meant even one fellow conservative who doesn’t firmly believe that black lives matter.”

“No, I Mean Black Lives Matter!”

NEIGHBOR: “Well, see there’s all the proof it takes to show that you’re the one who’s confused. The sign doesn’t say that black lives matter. It says Black Lives Matter! Do I really need to spell out the capital BLM for you?”

GILSON: “Oh, I get it! But the sign says ‘We believe black lives matter,’ not, “We believe in Black Lives Matter.” As in the organization. It’s kind of disappointing, too. I thought you might have had something sensible to say out there on your lawn. Or didn’t you know that BLM’s anti-police activism has caused a sharp increase black-on-black homicides this past year?”

NEIGHBOR: “Yes, I’ve heard that, but so what? Black Lives Matter. Capital BLM! What difference if BLM causes more black deaths? People die all the time, especially in ghettos. But at least they matter! Those additional crime victims … they died as part of the price of advancing social change. They’re heroes.

NEIGHBOR: “What on earth are you talking about?”

GILSON: “Suppose this so-called social justice was the only justice people cared about. It’s the only kind you hear about, it seems, so that’s not so far-fetched. What happens then to other forms of justice? Do they get forgotten? Do they get threatened? If they do, doesn’t your sign tell us that’s a threat to justice everywhere?”

NEIGHBOR: “Look, man, are you stupid or something? It’s a yard sign, not a philosophical treatise! That line’s cramped enough as it is, without writing the whole thing out. But you know as well as I do, it’s talking about social justice: ‘A threat to social justice anywhere is a threat to social justice everywhere.’ And there I’ve got you. Blows your whole logic right out the window. We’re not worried about other kinds of justice.”

GILSON: “Well, that’s a refreshing admission on your part. Up until now your answers have been pretty disappointing. That one leaves plenty to be desired, too, but I can at least appreciate your honesty.”

NEIGHBOR: “Well, I’m having trouble appreciating your ignorance. That’s two things now I’ve had to spell out for you. Don’t you watch the news? I thought you said you were a columnist or something.”

GILSON: “So you’re telling me I have some kind of responsibility to decode the magic language you’ve got hidden in your sign. So let’s take that line of thought one step further, if I may. Let’s go back to the line I realize now I skipped before: ‘No human is illegal.’ Tell me, what’s that about?”

NEIGHBOR: “It’s about the way you conservatives keep talking about illegal aliens. Aliens are people, right?”

GILSON: “Wow. Your logic there is nothing if not breathtaking. Truly, you have a dizzying intellect. But let’s go back to when you said these slogans mean more than just the simple words written on the sign. Liberals love that kind of thing: using shorthand abbreviated phrases with magical code meanings. You say, ‘Love is love,’ and everyone knows it’s magical secret code for ‘gay is okay.’ You sloganize that way all day long.”

NEIGHBOR: “Of course we do. And you’re right: Everyone with any brains knows what we mean by it, too.”

What Happens When Conservatives Use Shorthand Phrases?

GILSON: “So does it take any brains to figure out what conservatives mean when we speak in what you call “dog-whistles”? When we say, ‘illegal alien,’ does it really have to mean we’re making it illegal for them to be persons?”

NEIGHBOR: “Well, that’s what the words mean, isn’t it?”

GILSON: “No. ‘Illegal alien’ is shorthand for an alien who has broken our country’s laws coming here, and who is still breaking the law by staying here. Is there some reason it can’t mean that to you?”

NEIGHBOR: “Because a person ought to say what they mean and mean what they say. Otherwise they’re a hypocrite!”

Say What You Mean and Mean What You Say

GILSON: “Really? Then I guess someone here’s a hypocrite, and I’ll have to let it go at that. Before I take me leave, though, I have some words to leave you with. I will say what I mean, just as you’ve just said we should do; and I will mean what I say.”

And I finish my time on my neighbor’s front porch with a lesson. He even lets me continue to the end without interrupting. (I like imaginary conversations: The people in them are so cooperative!) So I tell him once again, as a conservative and as a follower of Jesus, I believe that …

And Stop Deceiving Yourself With Your Magical Liberal Code Words

Then finally I tell him what I really came to say:

I also believe in straight talk. A phrase like ‘illegal alien’ is straight talk: shorthand, sure, but nothing hidden. It’s honest shorthand. Your phrase, ‘No human is illegal,’ distorts that honest, straight meaning. All your slogans stuff magical secret codes inside, so that instead of being sensible shorthand, it goes full Orwell and mean the opposite of what they say.

Your words become lies you tell yourself. They’re fake sentiments, phony slogans; they’re deceitful, manipulative, and wrong. You’re not just manipulating others with them, you’re deceiving yourself. You owe it to yourself to do better than that.

Because a person really ought to say what he means and mean what he says. Otherwise he’s a hypocrite.

And then, true to my own principles if not to his, I get off his lawn.