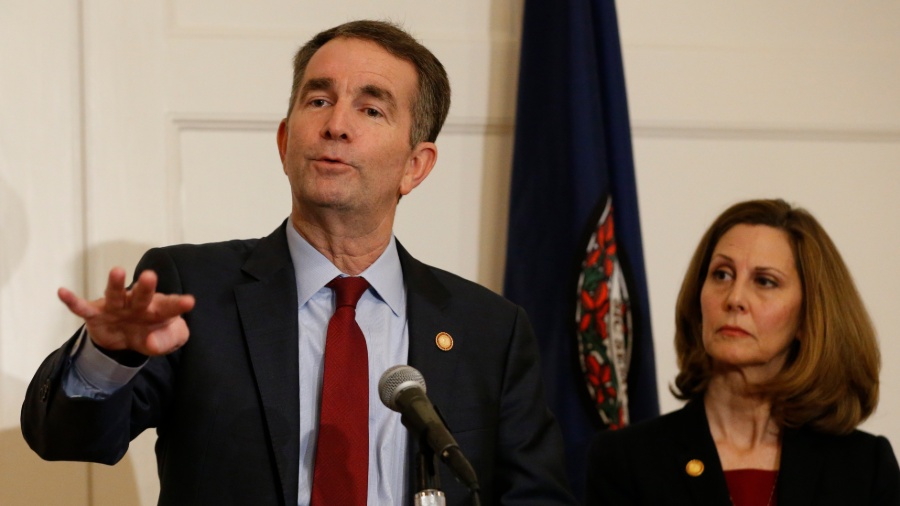 This weekend, Virginia Governor Ralph Northam broke his silence with two public interviews. His statements further exposed why leaders in both parties are calling for his resignation.

In a Washington Post interview, Northam announced a plan to roll out statewide “sensitivity training” down to kindergarten. Yet he declined to apologize for his own actions and the offense he has caused.

“What he did, playing around with blackface and dressing up as a KKK member, is extremely offensive,” said Virginia leader D.J. Jordan in an interview. “But I would not be calling on someone to step down for that offense on its own.” Currently a Republican candidate for the Virginia House of Delegates, Jordan elaborated on his statement. Statewide elections for the legislature are slated to take place this November.

“Governor Northam should step down because of the standard that he set on race,” said Jordan. He served for years as communications director for Senator James Lankford, R-Okla.

“He demonized his opponent in 2017, calling him every name in the book. It was disgusting how it divided our state. Now we learn his ‘zero-tolerance policy’ on racism was not only unfair but it was hypocritical.”

VA is an inclusive and diverse community—we won't put up with Ed Gillespie's racist rhetoric and fearmongering. https://t.co/WjEnUPBkXS

Leaders on the left also see this as a double standard. “So often today, there is one standard when we’re talking about the other party,” said Justin Giboney, president of The AND Campaign based in Atlanta, Ga. “— Then there’s another standard for ‘us.’”

“Virginia needs to set a very clear standard that this is unacceptable and move on from there,” he continued. “Even as a Democrat, I say Northam should resign.”

The scandal in Virginia is further complicated by the state’s line of succession. Lt. Governor Justin Fairfax has become embroiled in allegations of sexual assault.

Attorney General Mark Herring, number three in line, confessed to also dressing up in blackface. Next in line would be Virginia House of Delegates Speaker Kirk Cox, a Republican.

Asked if he’s concerned Virginia would switch parties, Giboney demurred. “I don’t care how it ends up,” he said. “That’s the political side of it, and this is a matter of principle. The right statement needs to be made.”

(Note: Technically Northam may have been correct in his specific reference to the 20 or so Africans who arrived in 1619. They were listed as “indentured servants” not slaves in Jamestown records and slavery wasn’t legal in Virginia until 1640. Their status, as USA Today noted Friday, is murky at best. Still, they certainly weren’t in America of their own accord, and, technicalities aside, the 1619 date is considered the beginning of slavery in the U.S.)

Virginia Gov. Ralph Northam: "We are now at the 400-year anniversary — just 90 miles from here in 1619. The first indentured servants from Africa landed on our shores in Old Point Comfort, what we call now Fort Monroe, and while—"@GayleKing: "Also known as slavery" pic.twitter.com/AiX96MU1rJ

Further, in his Post interview, Northam spoke of how he plans for racial equity to be the focus of his term in office. Jim Geraghty of National Review called out how this actually reflects inequity.

Some people face consequences for their offensive statements, he began. “Others escape professional and personal consequences for doing things that are much worse because of their political and financial power,” stated Geraghty.

Christian minister E.W. Jackson honed in on why he considers Governor Northam “much worse.” He addressed thousands last week who rallied at the Virginia State Capitol.

While the Governor’s record on race came up, the focus of the event was his stated support for infanticide. The rally reflected how pro-life advocates have spoken out vocally against state measures to legalize late-term abortion, including a bill in Virginia that failed.

“Six years ago, this was the man who refused to shake my hand after a TV debate,” shouted Jackson. “I’ve got a message for Governor Northam: I don’t want to shake your hand! I don’t want to shake the hand of a man who would sign legislation that makes it legal to kill a child even after that child is born.

“Governor, I would say this,” he concluded. “You can take that hand and you can sign your letter of resignation.” Some voices in both parties question whether an incident 35 years ago warrants resignation. Historian Jemar Tisby, author of The Color of Compromise on the history of racism in the U.S., provides context.

“First, it wasn’t that long ago,” says Tisby. “It was 1984, not 1964. Presumably, the social climate had changed enough for Northam to know better about blackface and Ku Klux Klan outfits.”

Both he and Justin Giboney offer perspective on the history of blackface. After the Civil War, many black Americans began to thrive with newfound freedom. Minstrel shows reflected how power structures in society shunned them.

“Blackface comes from these minstrel shows which were performed to mock African Americans,” said Giboney. “It was done to make us caricatures, enlarging our physical features and making fun of our speech. When you do that, it dehumanizes us. It was a way of seeing us as less than the white majority.”

As to the Governor’s association with blackface, Tisby notes his maturity at the time plays into the demand for accountability. “Northam was not a teenager when this photo was taken,” says the historian. “He was in medical school, in his mid-20’s. He was old enough to know better.”

Lessons in a Critical Time

As leading voices on integrating faith and politics, the three men advocate civility and compassion in this situation.

“Maybe Governor Northam has changed,” said Tisby. “It’s not that there’s no redemption for him. People should not denigrate his humanity. He is a human being worthy of care and concern.”

Yet he is clear in his call. “In the role of Governor, Northam is the political leader of an entire state,” said Tisby. “With this incident now public, he does not have the confidence of his constituents to continue to lead. His actions are so egregious as to warrant his removal.”

With the local perspective of a candidate, Jordan points to the lessons for Virginia. This year, the state will marks the 400 years since Africans arrived in Jamestown.

“Everybody needs to be more humble in approaching this topic right now,” said Jordan. “We’ve had a lot of challenges in our state — and also triumphs. Amazing black leaders in history come from Virginia, whether it be Booker T. Washington or Robert Russa Moton. Let’s look at ourselves and how we can create genuine racial unity in our Commonwealth.”

Giboney has a wider view from his vantage point as leader of The AND Campaign. The nonprofit group seeks to help Christians engage policy issues based on both biblical values and social justice. Misunderstanding is inevitable without relationships across racial divides, he stated.

“Northam needs to serve as a cautionary tale,” said Giboney. “His lack of awareness comes from a lack of relationship and fellowship. It is very easy to dehumanize people when you don’t have any interaction with them.”

“He lacked fellowship — talking with others, seeing their hurts and feeling their pain.”

Explore complete coverage of racial reconciliation issues, and sign up to receive top stories every week.