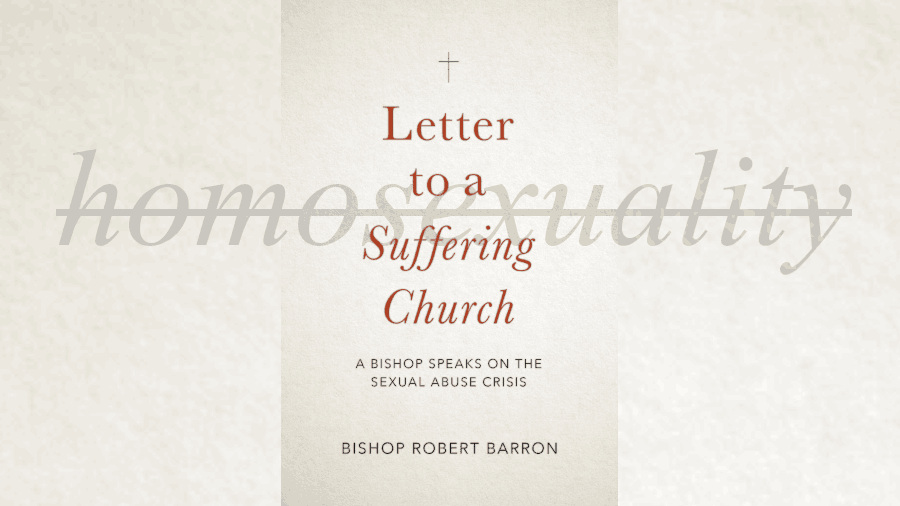 It is not true that Catholic Bishop Robert Barron does not mention homosexuality in his new “Letter to a Suffering Church” about the sexual abuse crisis. He does mention it. Once.

The single mention comes in a passage on St. Peter Damian. He wrote how, in those long-ago days, sodomy was a terrible problem in the priesthood and among the laity.

Barron quotes Damian, “The befouling cancer of sodomy is, in fact, spreading so through the clergy, or rather like a savage beast, is raging with shameless abandon through the flock of Christ.”

Barron writes, “By the term ‘sodomy’ Peter Damian meant a range of homosexual behaviors, but what particularly vexed him were acts of predation by older priests of young boys and the lax attitude of those religious superiors who knew about such outrages and did nothing to stop them.”

It is obvious Bishop Barron does not want to talk about homosexuality at all.

Note how fast Barron moves from the what to the who. He does not want to linger on the what. This is a theme.

Barron argues that Damian has an especial distaste for bishops who acted out sexually with their spiritual sons in the priesthood and the seminaries.

All of this is good stuff. Bishop Barron even mentions Theodore McCarrick and his crimes with seminarians.

But, in this book about the sexual abuse crisis, Barron does not make it clear, even remotely, that the present crisis was caused mainly by homosexuals acting homosexually. In this book urging Catholics to stay in the Church and fight for Her, he does not mention the principle threat during the sex abuse crisis has been predatory homosexuals.

Barron seems uneasy talking about this.

Consider his treatment of the Sodom story. Barron recounts how the “feral” men of Sodom demand that Lot give his males guests to them for “intimacies.” Barron says, “The gang rape being proposed — violent, impersonal, self-interested, and infertile — is the precise opposite of what God intends for human sexuality.” Lot offers up his daughters instead. The men decline. They want the men.

Does Bishop Barron recognize that the men of Sodom want men and not women, and therefore there is a homosexual angle to this? No. Barron is unwilling at this point to use the word. His exegesis reminds you of the backflips performed by homosexual advocates who insist the sin of Sodom was not homosexuality but lack of hospitality.

It’s clear Bishop Barron does not want to talk about homosexuality at all. Not its dominance of the public space. Not how it is taught to our children in school. Not how it is harmful to those who practice it, or detrimental to society. And certainly not about how the sex abuse crisis was predominantly a homosexual affair.

It should be understood that Bishop Barron is an almost unalloyed blessing for the Church. Anyone seeking the faith or looking for their faith to be bolstered could hardly do better than Robert Barron. But, on the homosexual question, though I am confident he believes his approach is the best, he is reluctant even to mention it.

His most lengthy disquisition on homosexuality came under questioning on a podcast hosted by homosexual libertarian Dave Rubin early in 2017. In the video, Rubin makes it clear that he is “gay married.”

Barron praised Pope Francis for “changing the subject from sexual morality to ‘the poor and the marginalized.'” He called this “good evangelical strategy.”

Bishop Barron told Rubin the sex abuse scandal was the perfect storm to undermine the evangelical project of the Church. It was a storm that damaged the Church to the tune of $4 billion to victims. It led hundreds of thousands out of the Church.

But surely it was far more “perfect” than that. The downright diabolical genius is that the storm was caused by men — homosexuals — who have a most favored status in our society. Criticizing them is simply not allowed. Yet fixing it requires the Church to criticize gay men.

Who is Finger Wagging?

Barron is not willing to do that, but he is ready to criticize the Church for what he calls Her hyper-moralizing about sex. “If the only thing a gay person hears form the church is you are intrinsically disordered,” he says, “we’ve got a very serious problem on our hands.”

He says the message of the Church to the same-sex attracted is that they are a beloved child of God. True enough. But I dare say, the only people hammering on about “intrinsically disordered” are homosexuals and their allies wagging their moralizing finger at the Church.

He quite preposterously says if this is the message the Church is giving to homosexuals, then “we [the Church] are disordered.”

One is left wondering what churches Barron visits. Most of us have never heard a finger-wagging sermon on human sexuality, let alone a sermon on homosexuality. We would like to know about those churches so we can go.

Unwilling to Talk About the Cause

Though Barron does not criticize homosexuality per se, he goes into detail about human sexuality. He says the structure God created has an “intelligibility that is discernable within our physical, psychological, and spiritual makeup.” All that is well and good. But I suspect even active married gay Dave Rubin may have been thinking, “I can be that kind of Catholic; after all, my homosexuality is all those things — intelligible and discernable within my physical, psychological and spiritual makeup.”

Barron admits to Rubin that Obergefell was a wrong decision. But he is not willing to say anything more. And then Barron says it is not something that should be revisited. “I would not want to get into a crusader’s tank to reverse it.” Well, there you go. If you want to change a wrong and harmful Supreme Court ruling, then your only option is a “crusader’s tank.”

There is much to commend in the work of Bishop Robert Barron. There is much to recommend in this thin volume. He is absolutely right. Catholics have to stay and fight. But I worry that at least with the sexual abuse crisis, Barron is not willing to consider, let alone talk about, the underlying issue. The thing that caused the crisis in the first place. That is, homosexual priests acting homosexually.

Austin Ruse is president of the New York and Washington D.C.-based Center for Family & Human Rights. He is the author of the Littlest Suffering Souls (Tan Books, 2017), and Fact-Shaming: Exposing the Left’s Skewed Statistics, Dodgy Data, and Pseudo-Science (Regnery Publishing, 2017).