Call it what it is instead: Payout. Payoff. Payola, even. 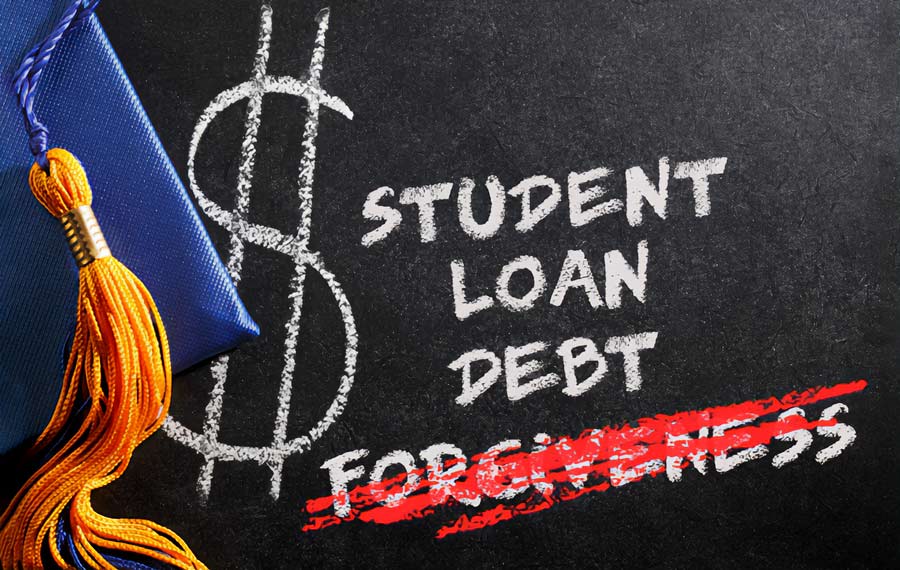 Do not call Biden’s deal today “loan forgiveness.” Don’t do it! You might as well call Death Valley a farmer’s paradise. Or call swimmer Lia Thomas the greatest woman in the pool.

Here’s what it really is, in story form to make it just slightly more obvious.

Jason is the head of the banking guild in his small country in a far-off part of the world. He’s a man with a heart. At least he’d like to think he is; or, better yet, he’d like everyone else to think he is, as he’s also a man with political aspirations. And it so happens that the people in his country who owe the most money are the very people who could give his ambitions a boost. So he calls a press conference and announces that their loans are now forgiven – not just at his bank, but all banks.

Immediately his phone is jammed with calls from those banks’ officers. “Who’s paying for this!?” they demand. He was expecting that, naturally. He’s unruffled. He has the power to do it (in this fictional land); there’s nothing they can threaten him with; so he’s calm and he’s smooth as he tells each one, “Oh, it’s just fine, my good man. Your bank has plenty of reserves. You’ll survive this. And besides, I’ve issued another new rule along with this one. We’ll keep it quiet, okay? No need to get the press talking about it. This other new rule says, if you need some bucks you can go ahead and skim it off your clients’ savings accounts. Just take a percentage now and then. You think they’d even notice?”

This is Not Forgiveness

There’s a lot wrong with that. A Iot. Allow me, though, to point out the lie at the heart of it: This is not forgiveness. It’s a travesty of the word. It’s a hypocritical, self-serving power move. It’s payola hiding under a word meant to mark virtue.

Likewise with Joe Biden’s huge student loan “forgiveness” deal announced today. There’s a lot wrong with it. It’s unjust, it’s certain to be inflationary, and it’s a power move patently meant to buy votes. All those effects will be comng down the road a ways, though. My first problem with it is the lie at the heart of it. This is not forgiveness, any more than Jason’s self-serving power grab was forgiveness in my story above.

I could be curmudgeonly and say the word “forgiveness” ought to be reserved for someone who’s done something wrong, who bears actual guilt. I won’t go there, though, as “loan forgiveness” is generally accepted language. It doesn’t fit perfectly, but it fits well enough … depending on who’s paying for it. Jason could have forgiven everyone’s loan at his bank, if he’d paid the cost himself. He didn’t, so it isn’t forgiveness. Biden isn’t either. You can draw the next conclusion yourself.

Forgiveness means many things and comes in many forms, but one way or another it always includes a willingness and an agreement to bear pain on account of something someone has done. When the husband forgives his wife for her affair, he does not say – indeed, cannot say – the pain is over. He’s saying instead that he will not pour all of the pain back over upon her. He will carry some of it. It will hurt. Badly. In time it may dissipate, and the two of them may even recover a vibrant, loving marriage. I’ve seen it happen. Still I am told on good authority that there’s no guarantee his pain will ever go completely away. He’ll see her doing things that will remind her of what she did. The pain will resurface, and he will carry it for the sake of his love for her. He cannot offer forgiveness without accepting that pain upon himself.

Allow me, though, to point out the lie at the heart of it: This is not forgiveness.

This is unavoidable. Forgiveness always means you agree to bear pain on account of someone else’s actions.

Possibly the best example of forgiveness in all fiction is the bishop in Les Misérables. Jean Valjean is caught stealing his silver, but he lets him go, not only with the silver but with a blessing besides. It becomes a turning point in Valjean’s life — and if I tried to tell you more, I’d have to beg forgiveness myself for the injustice I’d be doing this great novel. My point is this: The bishop didn’t get his silver back. He paid for his act of forgiveness.

Beyond question, the greatest example of forgiveness ever is found in Jesus Christ. Tellingly, the Christian religion is the one worldview that offers and emphasizes forgiveness above all others, and it’s also the one worldview whose primary symbol is a sign of pain and death: not ours, but God the Forgiver’s own pain and death. Jesus Christ suffered severe injustice, brutal torture, extreme humiliation, and an excruciating death, all so that we could be forgiven.

I understand not everyone agrees this actually happened in history. It did, but they will disagree regardless. What they cannot disagree with is the centrality of the cross in Christianity’s plan for forgiveness. Neither can they deny the centrality and uniqueness of forgiveness itself in the Christian faith.

The world’s other major worldviews offer only three options with respect to guilt and forgiveness. Either there is no God, so there is no one to hold us accountable, and guilt is irrelevant in the long run; or, there is a God or god or gods of some sort, but we hold no guilt before him/it/them; or we are guilty before some God or god(s), and we must work our own way out of that guilt, in whole or in part.

In sum: The one worldview that teaches the possibility of complete forgiveness before God also teaches that it would be impossible without God Himself bearing the pain of it.

This is the way of all forgiveness: You can’t call it forgiveness when you’re shoving the pain of it off onto someone else. Someone’s got to bear the pain. And it’s not going to be Joe Biden.

I haven’t read the details, but it’s safe to assume that private lending institutions will get their loan money repaid to them. Since it was guaranteed by federal funds, it will be paid out of federal funds. The White House fact sheet on this program says outstanding student loans currently total $1.6 trillion.

You can’t call it forgiveness when you’re shoving the pain of it off onto someone else.

Not all of that is covered in this plan. The actual total is hard to find, but an early estimate predicted something in the neighborhood of $230 billion, based on a payout of $10,000 per loan. Biden’s plan reaches $20,000 for some, so it’s a good bet that $230 billion estimate is too low.

$230 billion is what we call in my household “a lot of money.” And now you and I have to pay it. Someone else signed up for it, knowingly and willingly, and now they’re off the hook for it, we’re the ones who have to make it good, and Joe Biden calls it the government’s way of forgiving you your debt.

The Travesty of It All

It’s a total travesty. Forget my story above; it’s more like when your neighbor hits his wife, kicks his dog, and abuses his kids, and you walk over there and tell him, “Hey, it’s okay. I don’t want you to have bear the pain of doing that. I forgive you.” You wouldn’t do that; you’re not that stupid. Joe Biden wants to make you do it anyway.

But then again, no, that analogy doesn’t fit so well after all.. These student loans were never wrong like that in the first place. Calling them off the way Biden just did, though? That’s wrong. Very definitely so. Forcing the whole country to pay off an obligation that someone else willingly signed up for? That’s incredibly, intensely wrong. And calling it forgiveness, when in fact it’s payola, is a huge, hypocritical, damnable, self-serving lie.

Still, I could forgive Joe Biden for it. I could agree to carry as much pain as his foolishness lays on me. I’d gladly do so. Once he repents of it.