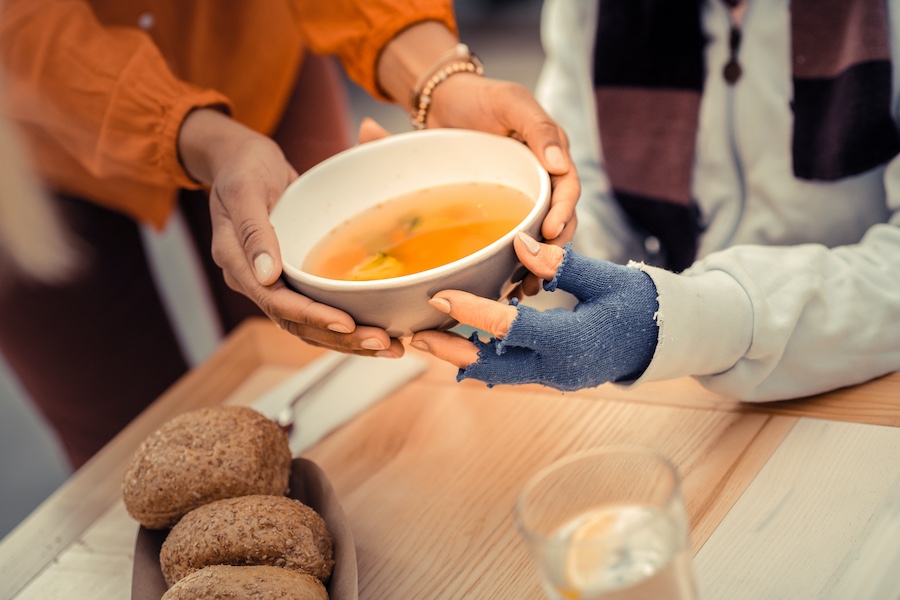 Christians are supposed to help the poor and the hungry. Does that mean we’re always supposed to feed them?

Well, no.  The misconception comes from skipping past some of the Bible’s most relevant passages, and I know of none more relevant than 1 Timothy 5:3-16.

It opens, “Honor widows who are truly widows.” Donald Guthrie’s commentary on the passage explains that “honor” here means “more than the normal idea of respect, for it here includes material support.” Guthrie adds, “It is worth noting that in approaching the theme of poverty as a matter of honour, the Christian removes some of its disgrace.” That’s a good thing, certainly.

But what about “truly widows”? Guthrie goes on tell us it’s about widows “who were genuinely destitute.” Apparently “widow” in that day was functionally synonymous with “someone who has no means of support.” The notes in the NIV Cultural Backgrounds Study Bible explain it this way: “Because sufficient wages were far more readily available to men, widows were often destitute without family support. … Widows without resources often had to depend on relatives, especially adult children.”

Instructions for Helping the Poor

What does Paul tell Timothy to do? Help them, of course! But “help” doesn’t always mean providing for them. Note the reference to “truly widows.” In other words, if their families can support them, then they must do so first, for “this is pleasing to God” (verse 4). The family has the first responsibility.

Surprisingly (for many) the Church should also take the widow’s track record of good character into account (verses 9 and 10).

If the widow can find another source of means for living, she should. Given the economic realities of the day — which we do not need or want to replay today — that meant she should marry again if she could. What the Church must not do, however, is support idleness (verse 13) or self-indulgence (verse 6). This sounds a lot like another instruction from Paul to the Thessalonians: “If anyone will not work, neither shall he eat” (2 Thess. 3:10).

Really? Withhold Food from the Hungry?

What? Does the Bible really say to withhold food from the hungry? Yes. Sometimes.

The principle that explains this appears in Galatians 6, which says in two verses (2 and 5), “Bear one another’s burdens,” and, “Each one should carry their own load.” The word for “burden” here refers to truly heavy loads, the kind no one should be expected to bear on their own. That’s an obvious contrast to each person’s “own load,” that they should carry.

Sometimes, a family is struck by tragedy — natural disaster, illness, death, job loss, or some other setback they couldn’t have expected, couldn’t have been expected to prepare for. In those cases, the Church should certainly help. When a region of the globe suffers drought, Christians elsewhere should pitch in all they can. When a man or woman is trying to climb out of poverty and needs a helping hand, the Church ought to help. In general, when it’s a “burden” in the same terms as in Galatians 6:2, we ought to help carry it for each other.

But what if it’s just a “load” that people ought to be able to carry themselves? Then they should carry it. If they fail to do so, it’s their responsibility. Not anyone else’s. That even means it’s not the Church’s.

How Is This Compassionate?

But how is this compassionate? They’ll go hungry!

The world defines compassion too narrowly. The mistake flows naturally out of their defining human flourishing too narrowly. For much of the world — especially the secular Left, with whom we’re most likely to have this discussion — flourishing means having plenty of basic goods and services to live on (where “basic” includes television, internet, smart phones …).

That’s not wrong as far as that goes, but it doesn’t go nearly far enough. A biblical view of human flourishing includes both body and soul, and it is the soul that is paramount. Secularists who deny the soul can substitute the term “character” if they like. It’s about self-giving love, integrity, responsibility, contribution to the community, self-respect, and more. These are matters of flourishing, too, and they’re no less crucial than physical health.

The Christian knows that these virtues — and especially the key virtue of faith in Christ — have eternal significance. Secularists may not agree, but if they would at least think in terms of character growth, that would be better than their current soul-stunting error of thinking about material needs alone.

My point here is simply this: A soul can grow inside a suffering body, or it can shrink inside one that’s healthy and well-fed. One great way to feed a body and starve a soul is by supplying material needs without expecting character growth to match. It creates incentives that run counter to developing individual character growth.

Secularists and even some religious liberals get this wrong. They complain about “oppressive systems,” then fight to create their own systems of oppression. For any system that’s built with the purpose of feeding bodies while starving souls is a system designed to harm whole persons. Individuals and communities can fight such systems, growing in character in spite of the contrary incentives, but it’s a heroic battle if they do.

Christians are called to care for others. Of course, no one knows perfectly what’s going on inside another person’s soul. So, if we err, we should err on the side of over-giving. When I’ve served in the local soup kitchen, I’ve never asked the person whether they were actively looking for work.

But then, I didn’t need to. These folks were residents at a rescue mission that was helping them get back on their feet with jobs and a permanent place to live. We were helping them carry their burdens, so they could eventually shoulder their own load.