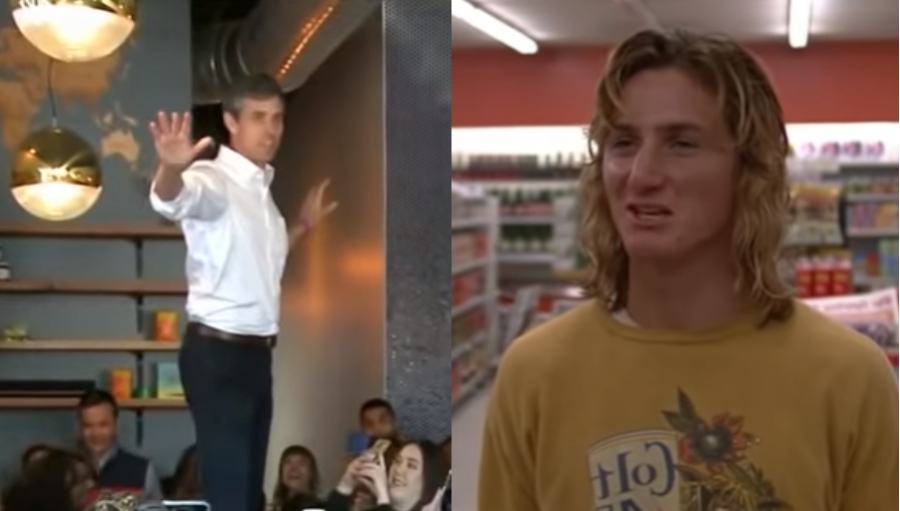 The cowboy was the distinctly American icon. So, it made sense that such an icon would be adopted by politicians. They speak to the American political psyche. In the modern age, the cowboy was assumed quite well by Barry Goldwater. He came from the west, wore a cowboy hat, had the roughhewn face of the cowpoke, spoke in quiet and direct cadences.

Goldwater wasn’t the only one. Not by a long shot. Along came Ronald Reagan. He did it well, especially as he stood up to the Soviet Injuns. It began to peter out as the western began to die. George Bush the Younger tried it, cutting brush on the weekends. But he could never shake his real pedigree of privileged frat boy playing at cowboy.

A New American Icon: The Surfer-Stoner

With the decline of the cowboy came the rise of a new American icon. He rose with the creation and celebration of California beach culture. Maynard G. Krebs starring Bob Denver of the 1950s Dobbie Gillis TV show likely started it all. He was birthed from the Beats but was the nascent stage of what became the new icon, the Beach Bum, the slightly dippy stoner.

Sean Penn took a star stoner turn as Jeff Spicoli in Fast Times at Ridgemont High. Here is Spicoli on the American founding, “What Jefferson was saying was, Hey! You know, we left this England place ’cause it was bogus; so if we don’t get some cool rules ourselves — pronto — we’ll just be bogus too! Get it?”

Where the cowboy transferred easily to American politics — particularly since real horsemen and frontiersmen really occupied the White House, muddy boots and all — the surfer-stoner has not emerged as a political type until now… with Beto.

As this American character developed, perhaps the most iconic portrayal has been Jeff Bridges as The Big Lewbowski. Even now, you can hear on public discourse, “Yeah, well, you know, that’s just, like, your opinion, man.”

Matthew McConaughey’s new role Moondog in the upcoming The Beach Bum will further develop the new American icon. He plays a wasted surfer stoner poet who married a rich girl who gives his id totally free-freakin rein, man. I am totally stoked for this one.

Where the cowboy transferred easily to American politics — particularly since real horsemen and frontiersmen really occupied the White House, muddy boots and all — the surfer-stoner has not emerged as a political type until now… with Beto. He rides a skateboard, dude. Even that name is a surfer-stoner name. You can actually hear someone buzz-head say, “Beto man, I buy, you fly.”

Where Barry Goldwater was the first self-consciously cowboy candidate, Beto is the first self-consciously surfer-stoner candidate. Toss in some toothy Kennedyness — Dems still go daffy for that Kennedy thing — and that’s the package, the whole package. Well, the entire package includes the fact that he has a reasonably attractive and also toothy wife who happens to be the sole heiress to her dad’s $20 billion real-estate empire. Ca-ching.

What you need to know about the surfer-stoner is that he is much beloved, at least on the silver screen. He is the funny, goofy shaggy dog. Even his mistakes are cause for mirth. Think of Spicoli hitting himself in the head with a shoe, “That’s my skull. I’m so wasted,” and you just have to love him.

Now, Beto is probably stupid as a box of stones, like all surfer-stoners have to be, albeit with a pinch of native wisdom tossed in. Which brings us to Beto’s greatest hits.

There are his arrests. One was for driving drunk and getting into a car crash and leaving the scene. Dude! And then there was the time he broke into the University of Texas at El Paso and was arrested for burglary. He must have been so high. He was in a rock band where he sometimes wore a dress. Awesome.

And then there is Beto’s poetry. Pure perfect surfer-stoner. It is so good. [Warning: Contains, like, some totally crude language.]

I need a b***-shine,
Right now
You are holy,
Oh, sacred Cow
I thirst for you,
Provide Milk.

Buff my ****,
Love the cow,
Good fortune for those that do.
Love me, breathe my feet,
The Cow has risen.

Oh, Milky wonder, sing for us once more,
Live your Life, everlasting joy.
Thrust your hooves up ** ********* passage,
Enjoy my fruits.

Provider of Cheese and other wonderful dairy products
We will cleanse your inner intestines.
We will bathe in your Pungent Oder,
Gather cotton.

Count my eyes,
Smell my skin,
Love the Scarecrow and the Milkman.
I live only for eternity,
Thirst for the undrinkable.
Hold the heat,
Praise the dough boy at the pizza shop
Love the Oxen dung!

Beto’s optics are practically pitch-perfect for the new age. Did I mention he rides a skate board at campaign events?

What about his politics?

A socially conscious Christian could certainly vote for a surfer-stoner dude, if his politics were right. Alas, it appears this former Catholic or whatever has pretty typical Democrat politics. He is all in for abortion, all in for gay this, gay that and gay the other thing. He thinks the world is coming to an end.

In terms of his record. He served two terms on the Waco City Council where he once berated a priest, and two terms in the U.S. House of Representatives where he was barely more than a wisp, kind of like that feather in Doonesbury that was supposed to represent Dan Quayle who, by the way, was right about everything.

In short, there is nothing unusual or compelling about Beto except his iconic status as the first self-consciously surfer-stoner candidate for president. But that is not nearly enough. Sorry, man.