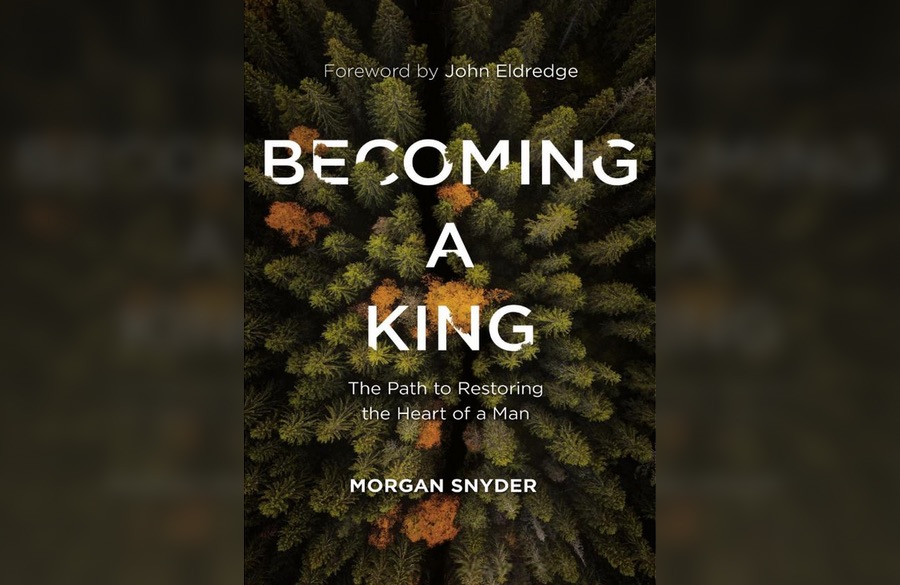 What caught my attention first was Randall Wallace’s endorsement. Screenwriter for the film Braveheart, Wallace said he’s “always reluctant to write blurbs for books,” and “I don’t like to sign my name to things that don’t matter,” but, “This matters.” If he says it, I’m inclined to believe it.

Yet I wondered anyway. I’ve read many books in the genre of Christian manhood. The title told me this was another: Becoming a King: The Path to Restoring the Heart of a Man. John Eldredge, whose Wild at Heart introduced me to the genre, wrote the foreword. So my first question while reading it was, “Would this say anything new?” More importantly, “What would it say to me?”

Both of those are wrong questions for purposes of a review. It need not matter to you whether a book says something new to me. I could have asked instead whether Morgan Snyder, the author, was a reliable guide to biblical manhood, on the order of Eldredge, or Gordon Dalbey, or Michael Thompson. If so, then Wallace would be right: This book would definitely matter.

It would matter because in this world we live in, where “toxic masculinity” sometimes means something real, sometimes something totally spurious, it’s hard to find great guidance on what it means to be a man following Christ.

Maybe your church, or better yet, your own father, is the exception. Maybe you’ve been getting great mentoring and modeling. Few of us have, though, so every solid new contribution to that instruction is welcome. It’s only learned if we live it, but we need great teaching even to know what we should be trying to learn and trying to live.

Being a Man of God

So what is biblical manhood? Just read some of the chapter titles and you’ll see how Snyder’s answer cuts straight across cultural prejudices: “Becoming Powerful.” “Becoming True.” “Becoming a Generalist.” “Becoming a Warrior.” “Becoming a King.” Doesn’t sound very churchy, does it? That’s okay. We’re not called to be churchy, but to be the men we were born to be.

“Becoming Powerful”? Really? Is that okay? Yes. Not for ourselves; not more name, for money, or mere accomplishment. But not against ourselves, either. God calls us to “become [men] who can delight the heart of God through what he does with power bestowed.”

We can even believe that the “desires placed within us were meant for good.” We were meant to be givers and protectors of life, which includes living life fully ourselves, not controlled by shame or fear, but going deep, enjoying the freedom of sonship to the Father.

Powerful? Yes, when it means power to fight “the particular plan of evil against your life.” And when it means becoming powerful through wholeheartedness, which can only be through discovering and living out our true identities in Christ.

So yes, it’s okay. It’s not unchristian. I’ve discovered myself from Scripture that greatness can be humble, and humility can be great. “Kingdom humility is harnessed strength, not passivity or absence of strength,” says Snyder. “God has set within us an indescribable power, yet that power can be harnessed for good only when it is brought ever-increasingly under his rule and care.”

But it’s all very counter-cultural. Words like “fight,” and “power,” and even “evil” are hardly fit for polite conversation these days. And what about wisdom? Snyder says we ought to make it our pursuit. That’s cutting against the grain, too, though. “A culture that values progress over wisdom will never be satisfied,” he says.

A wisdom-centered view, he says, “will require us to abandon our culture’s playbook for how to succeed and win in the game of life.” If we find it, he says, it will be through living in “Five Habitats”:

That last has to do with moving slower, not faster. It reminds me of a cell phone ad slogan, I saw once: “Never slow down.” Now, that’s the American way! No, it’s unwise. So is this business of not expecting shortcuts. “Doesn’t God seem profoundly comfortable avoiding shortcuts?” he asks. That’s certainly not in our culture’s playbook.

And it doesn’t have to be. It doesn’t even have to be in your church’s playbook, or your family’s. If you’re building your identity and purpose in alignment with God’s own plan and purpose for you, go for it! You have permission.

Permission. That one word answers the question I had when I started in on this book. The culture says manhood is “toxic.” False manhood may be, but not true masculinity under God’s control. “Fighting” and “warrior” may be dirty words in most churches, but wouldn’t you just love to join in the battle? The right battle, that is, where you stand for something that’s not just worth fighting for, but worth dying for?

It’s all in choosing the right battles, and being wise with what weapons we use and how we wield them. We need wisdom. We need to know our own identities, so we know where we fit in the grand story of the war that won’t end until Jesus returns. And we need the humility of letting our power flow under the harness of God’s rule over our lives.

There’s a moment or two when Snyder goes off course, especially in affirming Richard Rohr as mentor to another man. I only suggest you concentrate on the great majority of the book.

Randall Wallace was right: It matters. Men, read this book.