Be Prepared for the Sifting 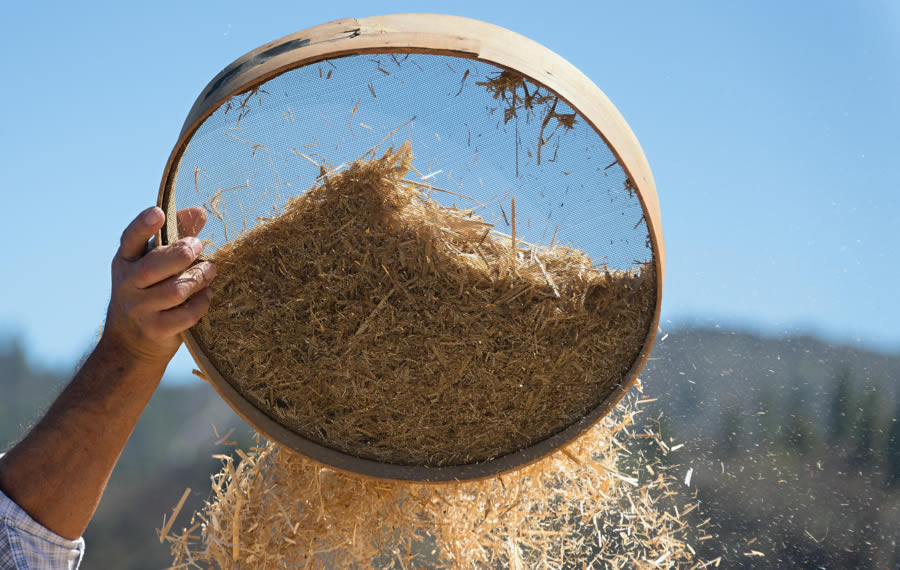 When grain was harvested by hand, the stalks of wheat would be cut at ground level and bundled. The bundles were then taken to the threshing floor.

This was an open space where the wheat would be beaten with flails — wooden rods with a shorter wooden rod attached with leather thongs. By beating the wheat, the threshing process broke the heads of grain from the stalks and broke the hardened shell around the grains of wheat. What was left on the threshing floor was a mixture of grain and chaff. The chaff was made up of the broken stalks and the hard shells surrounding the grains of wheat.

The chaff was trash. The grain was gold because it would be ground into flour to make bread.

The next stage in the process was sifting the grain from the chaff. This was done one of two ways: the first was by using a large rake called the winnowing fan to lift the mixture and throw it up in the air allowing the heavier grain to fall to the floor while the wind carried away the lighter, useless chaff. The second method of sifting was to put the grain and chaff in a large sieve like basket and shaking it so the smaller grain fell through to the floor and the chaff remained in the basket to be discarded.

The study of history reminds us that during times of social unrest the population is sifted. It unleashes the violence and hatred that simmers within the human heart. When the violence breaks out society goes through a kind of grain harvest.

When the sifting happens in any society things become clear. The grain and the chaff are separated. The truth and the lies are clearly seen for what they are.

People are cut off and taken to the threshing floor where they receive a thrashing not a threshing. In times of unrest violence rumbles through society, destroying property, threatening lives, raising stress levels and making people aware of hidden streams of injustice, resentment and fear. It’s like we’re taking a beating.

After the threshing comes the sifting. The chaff and the grain — the good corn and the useless chaff are thrown up in the air or sifted through the sieve. The grain remains while the chaff is gathered up and thrown on the fire.

When the sifting happens in any society things become clear. The grain and the chaff are separated. The confusion ends. The truth and the lies are clearly seen for what they are. The people of the truth (the grain) and the people of the lie (the chaff) are winnowed out.

Politicians have sent messages in which the light of truth, beauty and goodness have been mixed with the shadows of depravity, lawlessness and a twisted morality. The messengers in the mass media have also broadcasted a message that was contradictory, confusing and inconsistent.

Educators from kindergarten to college have also purveyed propaganda that was a confusing mixture of truths, half-truths and outright lies. International governmental bodies, charities and activist organizations have sent out contradictory messages — mixing up truth and lies with pure motives and secret agendas.

But the sifting is coming, and the sifting will eventually come through persecution. The lies and the people of the lie will soon be seen for what they really are, and ordinary citizens will have to make a choice. Will they compromise, go the easy way and accommodate the lies and the evil or will they stand up for the truth no matter what the cost?

In the nineteen twenties and thirties Europeans were in a similar state of confusion. Many good people supported Hitler and Mussolini because their governments seemed to be a bulwark against the atheistic communist revolutionaries in Russia. At first the fascists seemed to stand for everything good. They got the economy rolling. They wanted to weed out the soft, spineless decadence that had swept their countries. They presented a friendly face to the church. They were patriotic, supported strong families and stood for self-discipline, law and order and clean living.

The heroes of history and the heroes of faith are the men and women who discern evil, even when it wears a charming mask.

But eventually the sifting happened. The fascists were revealed for who they really were all along. Good people had to stand up and be counted, but by then for many it was too late. They had already compromised. It was easier to go with the flow. They had already become the chaff not the grain, and if chaff, then they were only fit to be gathered up and thrown on the fire.

The heroes of history and the heroes of faith are the men and women who discern evil, even when it wears a charming mask. The heroes are the ones who survive the sifting, stand strong and remain courageous even unto death.

We hope and pray that the present civil unrest in America will die down, that lessons will be learned and proper steps taken to continue to bring equality, justice, peace and prosperity for all Americans.

However, if the forces of unrest continue to grow, be prepared for the sifting. Out of the chaos a powerful leader may arise. Politicians will crumble and rush to appease the ominous power. Church leaders will kiss the hand of the oppressor and claim that the mass movement is blessed by God. Neighbors, friends and family members will jump on the bandwagon and mock and blame you for standing apart.

When the time comes will you stand strong? If you are already weak and inclined to give in to peer pressure and the power of propaganda, if you are the sort of person who will do anything to “keep the peace” then you may already be taking the path of cowardice and compromise.

Then when the sifting comes you may be like the worthless chaff which the wind blows away, but if you stand strong you will be the grain. You will be immortal gold.

Dwight Longenecker’s latest book Immortal Combat-Confronting the Heart of Darkness examines the origins of evil in the human heart and in society.

The Denial of Evil: The Case of Communism