A report from the rally where Seattle never stopped singing. 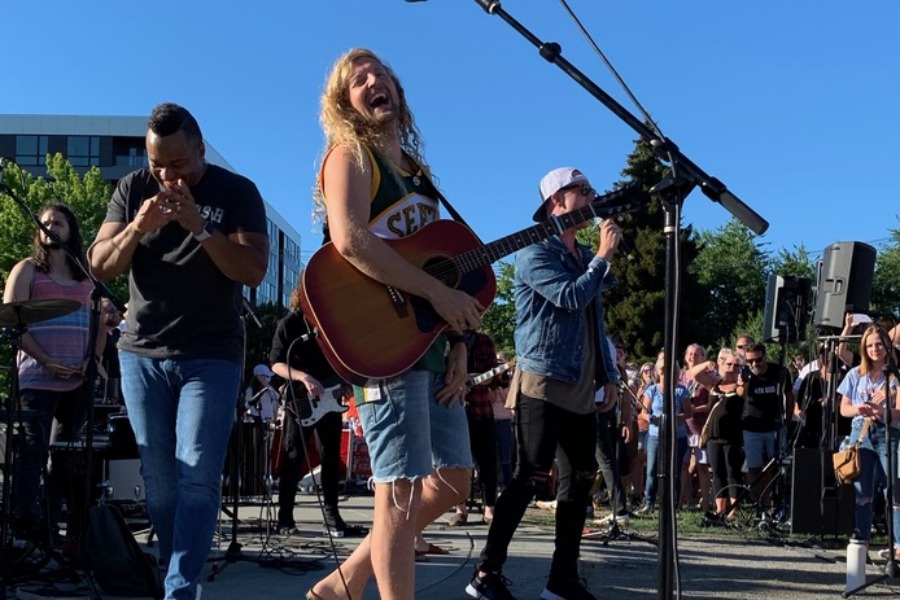 When word came out that some praise band from California was going to do a worship set on the site of the six-block CHAZ/CHOP district that protestors took over in Seattle during much of June, I knew it could mean war.

Sean Feucht, a musician who unsuccessfully ran for Congress in California earlier this year, has been staging impromptu Christian worship concerts around the country in protest of coronavirus bans against singing in churches. This past weekend, he performed in two cities better known recently for riots connected with Black Lives Matter: Portland and Seattle.

The Saturday night performance at Portland’s Waterfront Park came with baptisms in the Willamette River and counter-protestors who tried to drown them out. So it was clear that Sunday night’s performance in Seattle could be messy.

The day was as gorgeous as they come: Clear blue skies and golden sunlight slipping behind the buildings into Puget Sound when the music began shortly after 6 p.m. in Cal Anderson Park at the north end of the former CHOP. CHOP stands for Capitol Hill Organized Protest.

Arrayed against Feucht was a loose coalition of homeless, anarchists and a few Satanists who did what they could to stir things up. 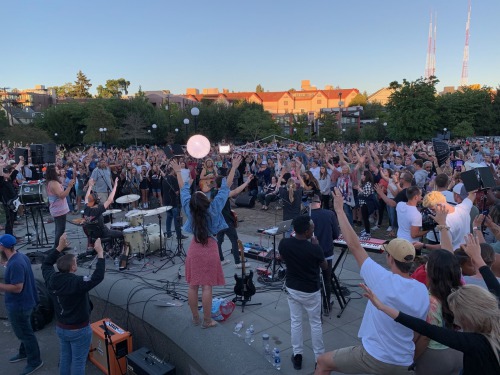 Afterwards, Feucht summed up the evening on his Facebook page:

It was absolutely bonkers in so many ways!!

Violent protestors showed up flashing knives! We had an entire satanic cult march through the worshippers the entire time yelling “Hail Satan!”

They yelled obscenities and cursed at my wife and kids all night long!

At one point, I had about 30 stationed bodyguards around myself and the band as [protestors] kept trying to storm the band and tackle them. They broke drums and guitar pedals!

They killed our generators at one point … yet through it all … SEATTLE NEVER STOPPED SINGING!!!

I was there too. Here’s how it appeared from my end.

I’d been to the area in mid-June when tourists were pouring in to gawk at the place. I eventually wrote a piece on the (mostly mainline Protestant and Jewish) chaplains who were offering spiritual counsel there. A number of evangelical Christian groups also made their way to CHOP during the three-week occupation. Among them was a team from Bethel, a megachurch in Redding, Calif., which is where Feucht is from.

There’s been no little resentment among Christians of all stripes that, while BLM and other protestors got a free pass to congregate, there’s been draconian restrictions on church gatherings. After California Gov. Gavin Newsome forbade singing inside of churches, three of them filed a federal lawsuit against him last month.

“It is a double standard,” Feucht told Fox News on Sunday morning. “At best, it’s hypocrisy and at worst, it’s bigotry. The problem is while street protests are allowed (with plenty of shouting), singing not allowed in churches.

“We have to rise up. We need bold and courageous pastors. … Are they going to stand against the insanity of our laws that target our churches?”

The Portland and Seattle rallies, he said, were held to counteract the “narrative of burning and destruction” on the nightly news and to “change the atmosphere” in their cities.

When I drove up to the former CHOP area, I was amazed to see the local East Precinct police building — which had been greatly defaced in June — was cleaned up, power-washed and surrounded by a huge fence. Cal Anderson Park had been a sea of homeless tents last time I visited. Heading into it, I saw lots of Seattleites — all with masks — relaxing on the grass.

Further on, I found a 20-year-old man with black rimmed glasses, jeans and a black jacket from Burlington, Wash., who identified himself as “Elya.” He was carrying a grey shofar at least two feet long. “I’m sounding the alarm,” he said. “We got a message at our church that it’s time to wake up.” 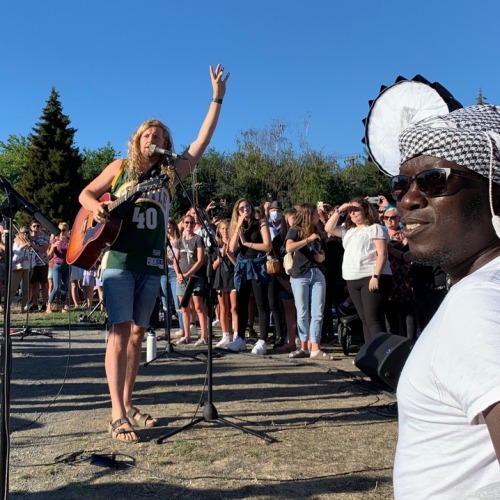 Standing closer to the stage area, I found Cindy Black, 61, from Bonney Lake, Wash., waving a purple banner she called a “royalty flag.” “I am here to break the darkness away from Seattle,” she told me, “and bring in the light of Jesus.”

Next to her was a group of multi-racial women from Everett, a city north of Seattle. (I’d guess that 10 percent of the worshippers at the rally were people of color.) Ana Karen, 27, said she follows Feucht on Instagram.

“When I heard he was coming here, I knew we had to go praise God in this place,” she said. “It’s much needed. Hopefully His presence will fall and there will be a shift in the atmosphere.”

Next to her was Regina Lewis, 16, a black teenager wearing a golden cross necklace. “A lot of people are looking to the wrong point of view and turning toward the negative,” Lewis said, “so I came out here to worship with all of God’s children.”

Meanwhile, Feucht and his band were doing endless rounds of sound checks. Wearing a green, gold and white 1990s-era Seattle Sonics jersey over cutoffs and Birkenstock sandals, he looked like a California surfer dude dropped into a Pacific Northwest rainforest. He had an enormous mane of curly blond hair.

“Don’t try to sing pretty,” he told the crowd, almost none of whom wore masks. Neither did Feucht or his backup band. “Just be wild,” he said. “You’re in CHOP, for heaven’s sakes.”

He then called up two pastors: One black and one white, to offer opening prayers, then asked the rapidly growing crowd if they were ready to “prophesy over Seattle.”

“I am so tired of hearing Seattle has so much witchcraft and this and that,” he said. “I believe He is stronger and when we worship, things will change.”

It wasn’t long before a black guy wearing some kind of white hood and carrying a staff charged the stage, yelling “Hail Satan!” The bodyguards spring into action. They had the Satanist offstage in seconds.

Meanwhile, I had to find a lady’s room, so I walked to the southern portion of the park where I met a woman named Moon S, 21, who was also waiting in line. We began to talk, and I learned she was homeless and one month pregnant.

“It’s dangerous,” she said of the Christians singing a half block away. “People aren’t social distancing and they’re not wearing their masks. I was told by them that Jesus and God will make sure they’re safe. They’re putting kids in danger.”

Actually, there weren’t that many children at the rally, but I didn’t debate her. We walked to her tent, where we met her husband, who declined to be interviewed, and Mikey B, 26, a friend lounging outside the tent. Arrayed in chains wrapped around his jeans, black leather boots and with what used to be a rosary around his left arm (he’s a former Catholic), he was upset that Seattle police had not disbanded the rally.

“They’re just trying to rile the Black Lives Matter movement,” he said of the worshippers. I didn’t hear Feucht say a word about BLM, but Mikey assured me that Feucht had casually mentioned the group.

Moon and I walked around a bit, talking with other homeless in the park. Other than the “Hail Satan” guy, all these folks appeared to be white millennials who were furious that the Christians were invading their space. That’s where I learned about their unsuccessful effort to cut off the generator. Some were also joking that the tub being used for baptisms had previously been used for Hazmat material but that the Christians had been too stupid to figure that out.

“What do you think of this?” Moon asked me. I tried to think up a neutral answer. “First Amendment,” I replied. “They have a right to be here just as everyone else does.”

After directing Moon toward a tent handing out free food and drink, I clambered up a wall to better survey the stage area. The crowd had swelled to at least 1,000 people and I could see the security folks milling about keeping rioters away from the musicians. By this time, the opposition was using bullhorns to try to drown out the music.

Apparently, park rules forbid any gatherings past 8 p.m., so at 8:05, Feucht called it a night.

“This is the most courageous group of worshippers,” he said. “You guys really pressed in tonight.”

A veteran journalist and writer, Julia Duin has written and worked for several major newspapers, including the Washington Post, the Wall Street Journal, and the Washington Times. She blogs at GetReligion. Her latest book is In the House of the Serpent Handler: A Story of Faith and Fleeting Fame in an Age of Social Media. Read more about her and her writing at Julia Duin.