The site is blamed for knowingly facilitating sex trafficking, including of minors. 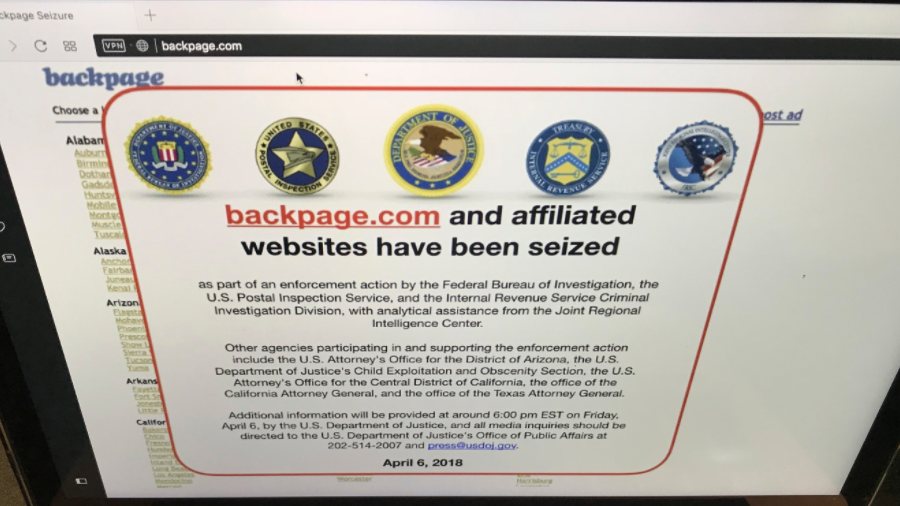 A screen shot of the website Backpage.com is seen Los Angeles Friday, April 6, 2018. Federal law enforcement authorities are in the process of seizing Backpage.com and its affiliated websites.

Federal authorities shut down Backpage.com Friday. And on Monday afternoon, the site’s founders and five others were charged in an alleged scheme to facilitate prostitution and hide their revenues.

Lawmakers, law enforcement and activists blame the website, which is similar to Craigslist, for facilitating sex trafficking. That includes child sex trafficking. The move to shut it down is being hailed by many as a victory. But Women’s March isn’t celebrating.

On Twitter Friday, Women’s March claimed “the shutting down of Backpage is an absolute crisis for sex workers who rely on the site to safely get in touch with clients.”

The allegedly pro-woman organization followed the tweet with a series of retweets also decrying Backpage’s demise. Missing from their weekend Twitter feed was any mention of women and children who have spoken out after being sold on Backpage. They also ignored evidence that Backpage knowingly facilitated sex trafficking.

. The shutting down of #Backpage is an absolute crisis for sex workers who rely on the site to safely get in touch with clients. Sex workers rights are women’s rights. Follow @SafeSpacesDC @melissagira @swopusa @KateDAdamo @supporthosechi @anaorsomething for more info. https://t.co/S3Orx3aM8Z

Founded in 2004 as an alternative to Craigslist, Backpage gained prominence in 2010 when Craigslist shut down its adult services section. The Dallas-based site became notorious for advertisements for prostitution.

Throughout the years, Backpage repeatedly argued it was not responsible for the content its users posted. It also claimed to screen its ads for language that would indicate criminal activity, such as child prostitution. Those defenses have held up, till now. Last year, The Washington Post revealed Backpage’s assertion that it wasn’t involved with the sex ads on its site was false. Documents unveiled in an unrelated lawsuit showed that Backpage used a contractor company in the Philippines, Avion BPO. Avion BPO actively recruited sex ads to promote on Backpage.

The revelation gave new gusto to U.S. senators and representatives who had been investigating Backpage for months.

In fact, a few months prior to the Post’s report, the U.S. Senate Homeland Security Permanent Subcommittee on Investigations released a report delving into Backpage’s criminal activity. The subcommittee is chaired by Sen. Rob Portman (R-Ohio).

Describing Backpage as “the leading online marketplace for commercial sex,” the report says the site operates in 97 countries and has 943 locations. It was recently valued at over half a billion dollars.

Even worse, “Backpage is involved in 73% of all child trafficking reports that the National Center for Missing and Exploited Children (NCMEC) receives from the general public (exluding [sic] reports by Backpage itself).”

Most troubling among the report’s findings, Backpage “has knowingly concealed evidence of criminality by systematically editing its ‘adult’ ads.”

The report describes how Backpage used an automatic filter to strip words like “teenage,” “rape,” and “fresh” from its ads. Once such terms were stripped, the ad was allowed to post. So while red-flag language was screened out, actual ads selling children were not.

Backpage itself estimated that by late 2010, it was editing “70 to 80% of ads” in the adult section, the report states. Some of the ads were edited manually.

Backpage used an automatic filter to strip words like “teenage,” “rape,” and “fresh” from its ads. Once such terms were stripped, the ad was allowed to post. So while red-flag language was screened out, actual ads selling children were not.

Eventually use of the filter subsided. But Backpage still permitted illegal ads to post by “coaching” users. For instance, users would receive an error message when a forbidden word like “teen” appeared in the ad. All the user had to do was resubmit the ad without that word. Then, it was cleared.

According to site moderators who spoke with the subcommittee, employees knew they “put[] lipstick on a pig” when it came to the adult services section.

The subcommittee’s report was released in January 2017. That same month, Backpage shut down its adult services section. However, the sex ads continued to proliferate the site’s dating section.

For Some Victims, It’s Too Late

“This is great news for survivors, advocates, and law enforcement in Missouri and across the country,” Sen. Claire McCaskill (D-Mo.) said Friday after Backpage was shut down. McCaskill is a member of the Permanent Subcommittee on Investigations. She also called the move “long-overdue.”

As a result of the shut-down, “traffickers will have to rethink their business models and sex buyers will face greater risk,” Polaris said in a statement. Polaris is an anti-human trafficking nonprofit. “The flow of easy money will slow and, as a result, fewer vulnerable people will be bought and sold against their will.”

In 2016, Hazley sold Robinson for $250 to Antonio Rosales. Rosales then beat Robinson, slit her throat, and left her in a garage. Rosales had found Robinson’s ad on Backpage. It was just one of many ads Hazley posted on Backpage advertising Robinson for sex.

Robinson’s mother, Yvonne Ambrose, is suing Backpage. “Everybody knows they’re doing it, and they’re not being held accountable,” she told The Washington Post last year after learning of the Avion BPO revelations.

The Post reported that just days before Robinson’s murder, she wrote on Facebook: “I’m in a situation where I’m being pimped,” and, “He won’t let me leave.”

Last month, before Backpage was seized by federal authorities, anti-trafficking activists and lawmakers celebrated another win. The FOSTA bill, which stands for Fight Online Sex Trafficking Act, passed the House and Senate. If President Donald Trump signs it, it will become law.

Currently, the Communications Decency Act protects websites from liability for content posted by users. That’s how Backpage escaped lawsuits unscathed for so long. The FOSTA bill would allow state authorities and victims “to pursue website operators in both criminal and civil court,” the Post reported.

Despite investigations showcasing Backpage’s complicity in sex trafficking, the Women’s March has sided with Backpage. It has opposed the FOSTA bill, and mourns the shutting down of Backpage. Apparently it doesn’t matter that thousands of children have been sold for sex on the site. It doesn’t matter that thousands of women have been sold against their will on the site. Many of these victims are speaking out. But rather than amplify their voices, Women’s March ignores them.

Remember that next time Women’s March and its supporters purport to speak for women.

Watch the trailer for I Am Jane Doe, a documentary featuring victims of sex trafficking on Backpage. The film is now available on Netflix, Amazon, DVD and more.