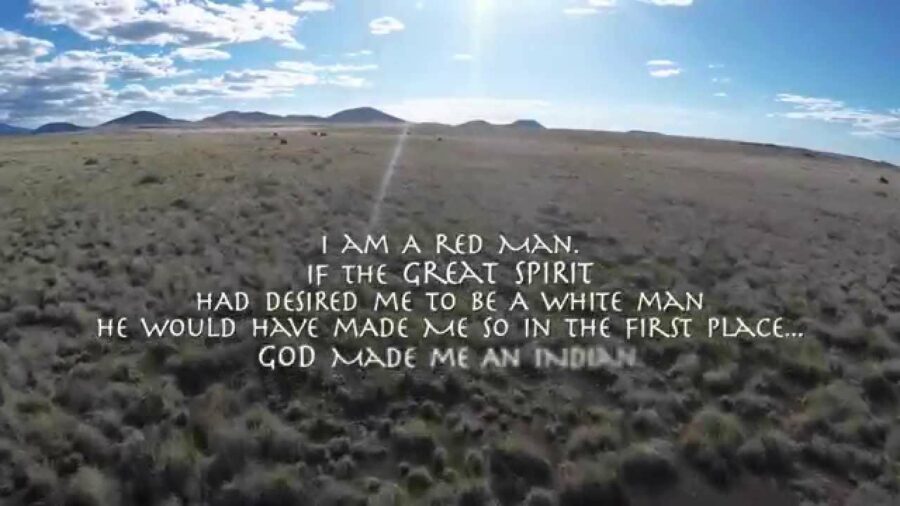 In 1975, Billy Graham stood in front of a small group of Native American leaders in Albuqeurque, N.M. and issued this proclamation:

The Native American has been a sleeping giant. He is awakening. The original Americans could become the next evangelists who will help win America for Christ.

Forty years later, Dr. Graham’s prophecy appears to be coming true. Members from the First Nations, across the United States and Canada have been coming to Christ in large numbers. In 2015, the Navajo Nation elected on-fire, born-again Christians as its president and vice president. This past weekend, the Gathering of Tribal Nations 2016 was celebrated in Seminole, Oklahoma. And this past April, seventy-five tribes were represented at the massive Azusa Now! revival gathering in Los Angeles, taking a strong leadership position for the first time at a major Christian conference. This revival among Native Americans, and what it means for America as a result, is documented in a new film: Awakened: The Spiritual Destiny of the First Americans.

Interspersing interviews, archival footage, church services and revival meetings with soaring imagery and original Native American-themed score, Awakened journeys through the often-sorrowful history of Christian interaction with the native people, into the present, powerful revival and the prophetic sense of what this revival means to an America in desperate need of a return to God. The early section of the film is tough, emotional sledding, as it recounts how Christian missionaries often blew it with the native population. Billy Graham is seen confessing as much 40 years ago, saying, “I think many missionaries mistakenly tried to convert the Indian to a culture rather than to Christ. They forced upon him forms of worship strange to his heritage and traditions.” Narrator and Navajo pastor Jim “Iron Eyes” Cody states the missionaries “did not share the gospel just so we would know Jesus, but so we would know the rules of white civilization.”

Ellson Bennett, current Pastor of Covenant of Faith in Hidden Springs, Ariz. and a Navajo, agrees, “The gospel that was brought to us, the gospel, which was a westernized viewpoint of ‘you have to sing my songs, you can’t be Indian, you can’t be a Native American, you can’t wear your jewelry, you can’t sing your songs, and use your drums.” The Meaning for America

Awakened lays out a stunning declaration from Native leaders that this revival among the First Nations is part of God’s plan for our whole nation. Bennett notes that there are over 500 recognized tribes in the U.S., and 45% of America’s natural wealth is on their reservations. The Native Americans “seem to be the poorest, but are actually the wealthiest people in the world,” he says. “God has reserved our land, our wealth for an End Time gospel, for an End Time move of God.”

Alvin Cheah, a revivalist from Malaysia and China who is working with the First Nations, says,“America has abandoned the faith of its forefathers.” He says the United States “needs to focus on Native Americans. When they rise up they have the spiritual authority to break the darkness and witchcraft.” Bonnie Chavda of Chavda Ministries agrees, seeing “a great eagle army rising from the First Nation.”

“Your leaders are saying what we wish our leaders were saying,” Awakened director Greg Miller tells the First Nations pastors during a meeting with non-Native pastors in Sedona, Ariz. “If we are heading into a great Awakening, then those of us Christians who are looking for that and wondering what to do to be most effective should probably consider getting on board and helping you do that. Not bringing what we know, but stop and say ‘tell us what you know … we need to learn from you.” The pastors are next seen on a canyon’s edge praying over Sedona, a Mecca of New Age beliefs and practices. A prayer is offered: “This is my body, this is my blood. The Lord says I hear blood cry from the ground and I now turn my face to the host people of the land. And in them I will empower them, and I will use them.”

Awakened was written, directed and scored by Greg Miller, a Hollywood entertainment industry veteran and worship leader, who in 2013 felt led to leave L.A. for Sedona. Sharp-eyed movie-goers might recognize his name from the credits of several familiar Christian films, including God’s Not Dead. In the interests of full disclosure, Greg is a close friend of mine, and watching him on the screen the profound impact of his experience with the First Nations is as clear as the HD footage.

Miller tells The Stream that his “faith walk has absolutely gone to the next level as a result of doing this film.” From his initial uprooting from L.A. to being “divinely connected to a story and a people that were never on my radar or any ‘project wishlist’ of mine, God has proven His faithfulness throughout this entire process and raised my ability to believe for the impossible in a whole new way.”

Adds Miller, “It has also been the most satisfying journey I’ve ever been on as we have seen God move miraculously every step of the way.”

The most impactful thing I’ve learned is that more than token help and ministry events, our native brothers and sisters desire real relationship with us. As we walk alongside each other and learn of each other as true friends and peers, we then experience much deeper and more meaningful Kingdom impact in our ministry endeavors together.

If all of the things being stated in the film are true … if we believe that the things Billy Graham stated 40 years ago are coming to fruition right now… if the keys to America’s national destiny and revival are in the hands of the native people of North America and have the power to usher in the “next great awakening” and lead to revival, then getting behind this movement and inspiring First Americans to take their place in Jesus is arguably the single-most important thing we can do as Believers! Awakened: A Spiritual Transformation in Native America can be downloaded here.  The DVD is also available for purchase and church screenings.