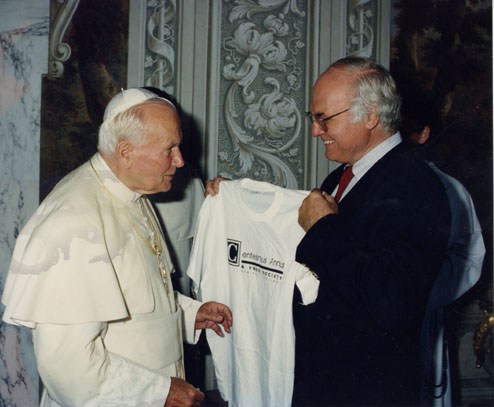 Michael Novak < Back to Voices

Novak’s whole life has been a story of religious scholarship, social commentary and intellectual independence. His insights into the spiritual foundations of economic and political systems and his articulation of the moral ideals of democratic capitalism have secured his place as an original thinker of the late twentieth and early twenty-first centuries.

On issues as diverse as capitalism versus socialism, human rights, faith, labor union history, sports, ethnicity, peace, liberty and justice, the American presidency, families, welfare reform, television and the role of the churches in a pluralistic world, Novak has provided critical and literate debate in his books, syndicated columns, and innumerable lectures, articles and commentaries.

His work has been effectively applied by a variety of world leaders — from Eastern Europe to Latin America, from Beijing to London. Indeed, Novak’s work on the moral basis of democracy and capitalism may be more widely celebrated outside the United States than within it. In her 1993 book, The Downing Street Years, Lady Thatcher praised Novak’s “new and striking language” and “important insights,” and added that his writing on the morality of political economy “provided the intellectual basis for my approach to those great questions brought together in political parlance as ‘the quality of life.’”

Behind the Iron Curtain in Czechoslovakia, the dissidents of Charter 77 and Civic Forum used The Spirit of Democratic Capitalism and The Experience of Nothingness (1970) in their clandestine study groups. In El Salvador, former president Alfredo Cristiani once noted that after hearing Novak lecture in San Salvador and reading Novak’s work, he committed himself to running for the presidency of that war-torn land, in order to work for a just peace. In Chile and Argentina, proponents of democracy from right to left — including, often, Christian Socialists — turned to Novak’s writings on democracy and free markets for guidance. So it was also among democrats in South Korea in the early 1980s. In Poland in 1984, a great debate raged within Solidarnosc over whether to risk the underground publication of The Spirit of Democratic Capitalism. In a very close vote, supporters triumphed. Many today look back upon that vote as a watershed in the movement away from socialism and toward a new ideal.

Novak’s reflections on religious, political and economic issues have been consistently marked by foresight. He has repeatedly staked a lone position that eventually became mainstream thought.

Before the widespread recognition of ethnicity as a potent political force, Novak published The Rise of the Unmeltable Ethnics in 1972. As opposition to nuclear weapons swept the Western world in the early 1980s, Novak demurred, citing the need for fundamental change in Soviet politics as the only sure way to reduce the danger of nuclear war. Only later, after Gorbachev assumed the Soviet presidency and began moving toward internal political reform, did the world first see a decline in the nuclear threat.

When Gorbachev introduced glasnost, Novak, then U.S. ambassador to the Helsinki process in Bern, urged Western leaders to embrace the first tentative moves to openness but to reject inadequate measures proposed by the Soviets.

When many theologians embraced liberation theology as the preferred political course for Latin America, Novak questioned the practical value of recommending socialism for poverty stricken peoples, long before the public collapse of socialism in 1989.

When most Catholic scholars were defending a “middle way” between capitalism and socialism, Novak’s work on the three systems of liberty — political, economic and moral — was widely regarded to have influenced the argument of Pope John Paul II’s encyclical Centesimus Annus.

In 1978 Novak began work as a resident scholar at one of the world’s most influential think tanks, the American Enterprise Institute for Public Policy Research in Washington, D.C., where he was director of social and political studies. In 1983 he was named the George Frederick Jewett Chair in religion and public policy. Novak retired from the American Enterprise Institute in 2009.

Novak has been granted twenty-six honorary degrees (including four in Latin America and three in Europe), the Friend of Freedom Award from the Coalition for a Democratic Majority, the George Washington Honor Medal from the Freedom Foundation, and the Ellis Island Medal of Honor, among numerous other honors. His selection as recipient of the 1994 Templeton Prize for Progress in Religion capped a career of leadership in theological and philosophical discourse.

Novak has taught at Harvard, Stanford, SUNY Old Westbury, Syracuse and Notre Dame. A memoir of the development of his political and economic thought, Writing from Left to Right, was published in September 2013.

The American Founding Isn’t the Fruit of European Liberalism

This essay is part of a series examining how American religious, economic, and political freedom are compatible with Christian views of a good society. It was provoked by the publication of the Tradinista Manifesto, which called for “Christian socialism” and…