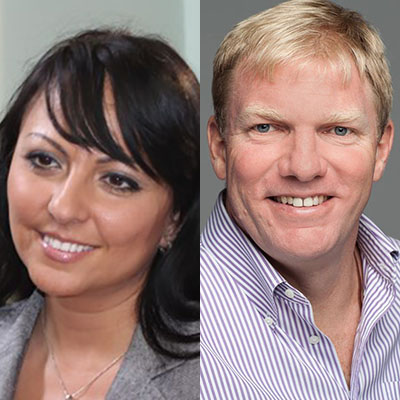 Juliana Taimoorazy and Jason Jones < Back to Voices

After fleeing Iran in 1989 due to religious persecution, Juliana, an Assyrian Christian, received her graduate Degree in Instructional Design and worked as a Training and Development Specialist for Fortune 500 companies for several years.

In 2007, Juliana started to volunteer for Catholic Charities in Chicago and began mentoring young Iraqi Christian women arriving from refugee camps in Turkey and Syria. This led to the creation of the Iraqi Christian Relief Council.

Juliana’s philanthropic efforts have taken her to Washington, D.C., where she has advocated for persecuted Christians in the Middle East, meeting with the lawmakers in both the House of Representatives and the Senate.

She is executive producer of the human rights film Sing a Little Louder.

Jason Jones is a Senior Contributor to The Stream. He is a film producer, author, activist and human rights worker. For the past 30+ years, he has worked to defend the most vulnerable — from the homeless on the streets of Los Angeles to persecuted Christians in Africa, from women in crisis pregnancies to victims of “honor killing” in Iran.

He attended the University of Hawaii, after a tour serving in the U.S. infantry. At UHI, he founded the Pro-Life Student Union and served as state chairman of Young Americans for Freedom. Jason would go on to serve as director of Hawaii Right to Life, national youth director of the American Life League, grassroots director of Brownback for President, and public relations director for the world’s largest international pro-life organization, Human Life International. He has appeared in defense of the most vulnerable members of the human family on ABC, Fox, CNN and hundreds of radio programs nationwide.

Jones is the Founder of HERO [Human-Rights Education and Relief Organization], a non-profit that promotes human dignity regardless of ability, age, status, race or geography. He spearheaded a HERO initiative to bring clean water to suffering refugees in South Sudan. In 2009, despite the government’s warning of unsafe travel, Jason visited Darfur and inspected 26 new water wells and distributed $2 million in food, medicine and other aid. He is currently leading an effort to provide emergency aid to the victims of ISIS in Iraq.

Jones was a producer on the 2006 prolife film, Bella, which won several film industry awards, most notably the People’s Choice Award at the 2006 Toronto International Film Festival.

They come so thick and fast, the horrors committed by the Islamic State. It is hard for those of us far away to avoid becoming numb. Yesterday, our friends among the hunted Assyrian Christians of the region sent us desperate…