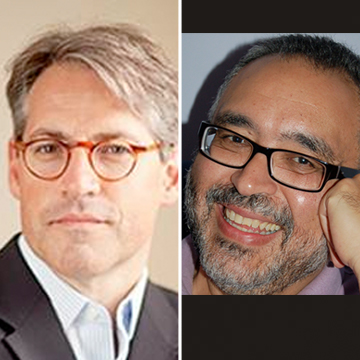 Eric Metaxas is a Christian author residing in Manhattan. His best-selling biographies Bonhoeffer: Pastor, Martyr, Prophet, Spy and Amazing Grace: William Wilberforce and the Heroic Campaign to end Slavery, have made him a sought-after speaker. He was the keynote speaker at the 2012 National Prayer Breakfast in Washington, D.C., an event attended by the President and First Lady and other U.S. and world leaders.

He is founder of Socrates in the City and co-host of BreakPoint, a daily radio commentary launched by Eric’s mentor Chuck Colson and heard on 1,400 radio outlets nationally.

In 2001, he was the 17th recipient of the Canterbury Medal awarded by the Becket Fund for Religious Freedom. Previous medalists include Mitt Romney, Chuck Colson and Elie Wiesel.

At the invitation of Cardinal Timothy Dolan and Fr. Jonathan Morris, Eric began broadcasting Faith and Culture Minute on The Catholic Channel on Sirius XM Radio in October 2012.

Roberto Rivera is a Senior Fellow and columnist at Breakpoint.org.

The Continuing Triumph of Faith

A year ago, National Geographic told readers that “religion is rapidly becoming less important than it’s ever been, even to people who live in countries where faith has affected everything from rulers to borders to architecture.” But as Rodney Stark documented…

Canada, the ‘Right to Die,’ and the Mentally Ill

A New Rain (Reign?) of Faith in Europe

The Rest of the Jackie Robinson Story