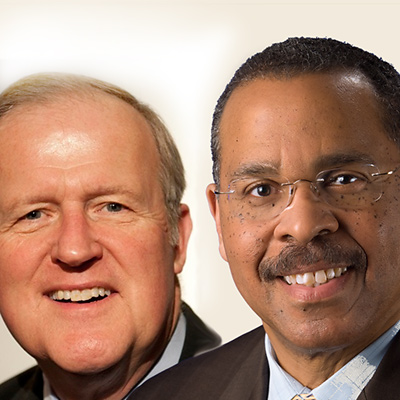 Ken Blackwell is the Senior Fellow for Family Empowerment at the Family Research Council.  He is a national bestselling author of three books: Rebuilding America: A Prescription For Creating Strong Families, Building The Wealth Of Working People, And Ending Welfare; The Blueprint: Obama’s Plan to Subvert the Constitution and Build an Imperial Presidency; and Resurgent: How Constitutional Conservatism Can Save America.

Ken’s commentaries have been published in major newspapers and websites: the Wall Street Journal, USA Today, the New York Times, Washington Post, Washington Times, and Investor’s Business Daily.  In addition, he has been interviewed by many media outlets including CBS’s Face the Nation, NBC’s Meet the Press, ABC’s This Week, and Fox News Sunday.

Bob Morrison was educated in New York Public schools and earned his B.A. and M.A. degrees in government and foreign affairs from the University of Virginia. He has also done graduate work in education at Hofstra University and in history and communications at the University of Washington.

Since coming to Washington in 1984, Bob has served at the U.S. Department of Education with Gary Bauer under then-Secretary William Bennett. He was the first full-time Washington, D.C. representative of The Lutheran Church-Missouri Synod. He came to Family Research Council (FRC) in 1991, where he served in various capacities, including editor of Washington Watch, Senior Education Policy Analyst, and Vice President for Policy.

Bob took the lead in guiding FRC’s response to the national history standards that were promulgated during the Clinton Administration in 1994. FRC then published his work Let Freedom Ring, a basic outline of U.S. History, a publication requested by 50,000 FRC supporters. Bob has also defended religious liberty. He helped design the successful FRC campaign that distributed more than 1 million Ten Commandments book covers throughout the U.S. Most recently, Bob led the historical research for Bill Bennett’s book, America: the Last Best Hope. Bob is married with two adult children and three grandchildren. Bob served in the U.S. Coast Guard, where he took an active role in rescue missions, iceberg patrols, and was a Russian language interpreter.

Mr. President, Mr. Secretary: It Is Genocide. Say So!

President Obama and Secretary of State John Kerry have until March 17th to issue a determination that ISIS’ attacks on Christians in the Mideast are genocide. Time is running out. The foot-dragging and hesitancy of this administration in calling it genocide…

From Iran Deal to Planned Parenthood, James Madison Playbook Could Teach GOP House How to Win