Attacked by Jihadists, They Cling to Faith in the Multi-Cult

By now I’m sure you’ve read reports of the most recent incident on the Muslim Atrocities Ticker: the vicious jihadist attack in London. This appalling attack has it all:

Rinse and repeat, until Britain is remade in the image of Libya or Syria.

Not exactly the spirit of the London Blitz, now is it? Attacks like these, that turn out like this, are what happens to a naturally brave and dogged people, like the British, under the soul-draining influence of a false and toxic religion.

No, I don’t mean Islam. The jihadi menace in the West is a deadly symptom, but it’s not the cause. It’s an opportunistic infection, like the pneumonia that kills you after your immune system collapses thanks to AIDS.

What is this false religion, this civilizational AIDS? It’s multiculturalism. Cooked up in that promiscuous bathhouse that is the modern university, it serves as a comprehensive replacement for Christian faith, sane politics and even manners. It’s all purpose, like Scientology — but without that creed’s rigorous attachment to the facts.

Posing as an answer to racism and real, irrational xenophobia, multiculturalism in fact is something quite different. It’s a variety of Marxism. But it drops out the proletariat — who have a distressing tendency to vote for things like Brexit and people like Donald Trump. Instead it plugs in as the always righteous and conquering motive force of history …

Just about anyone who’s not a white male, whom one can paint as somehow a victim. That is based not on real experiences of discrimination or bias, but on group identity politics. Hence a black female trust fund student sitting in a Gothic dorm at Yale qualifies as a victim. A white coal miner who lost his job thanks to “climate change” activists (like her) does not.

A wealthy gay couple who taunt a Christian baker by demanding he make their wedding cake: they’re victims. The underfunded baker who follows his conscience and loses his business: he’s not.

Sharia-spouting immigrants living on public assistance in Britain and keeping mum about jihadists or rape-grooming gangs in their midst: they’re victims. The Englishmen whom jihadists terrorize: they’re not.

A Simple Cult for the Sophisticated

Have you got it now? It’s a pretty rudimentary, almost primitive religion. Its crude rites involve only two elements: straw men, and sacred cows. However, because it’s so gnostic and unnatural, its implications are complicated, even grotesque.

Andrew Sullivan cogently laid out the kinky psychology and scrupulous morality of this movement. He noted how it is multiculturalists, not Christians, conducting all the witch-hunts in universities in the West. Christian philosopher Rene Girard called this creed “Victimism.” He wrote in one of his late works that it is the worldview that will “bring on the Apocalypse.”

If you want more, albeit deeply depressing proof that multiculturalism has morphed into a functional religion, here it is: People have started turning to it in their moments of gravest danger. They look to it for comfort, instead of the Christian God. In fact, they cling to it with the fierce faith of martyrs. They defend it with the zeal of glassy-eyed fanatics.

Now and At the Hour of Our Death, Amen

Ben Domenech, editor of the stellar online magazine The Federalist, posted the following on Twitter. Please excuse the redacted profanities. It’s a transcript of what took place in the pub near the jihad attack in London last weekend: 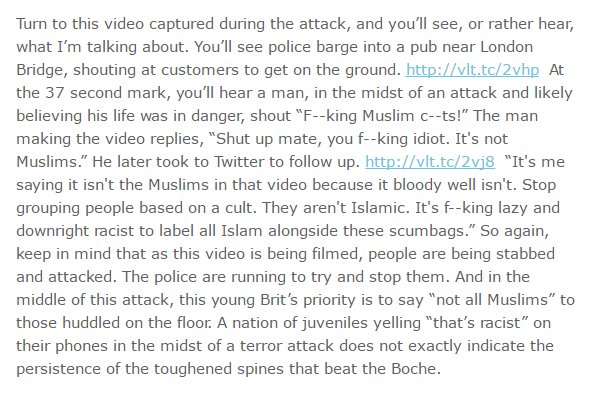 Just think of the powerful faith that must underlie such a response. Put yourself in that patron’s shoes. You’re sitting in a pub in your hometown, having a pint. Then a bunch of foreign-looking people (some of them with foreign accents) attack your fellow citizens. They’re shouting in Arabic. During Ramadan. Not two weeks after Muslims bombed little girls in Manchester, England. You’re face flat on the floor, in desperate fear for your life.

The Blood of the Milquetoast

But you have the presence of mind to rebuke an evildoer. Not the 7th century fanatic who’s menacing your life. No, your fellow Englishman. It is he that has broken a sacred taboo. He has in a blink of an eye turned the victimizer to victim. Now the Muslims who are trying their best to kill you are victims of Islamophobia. And that is worse than jihad. Worse than terrorism. You’ll take a stand against it, perhaps with your dying breath.

If that’s not a religion, I really don’t know what is.

Too bad it’s a suicide cult.