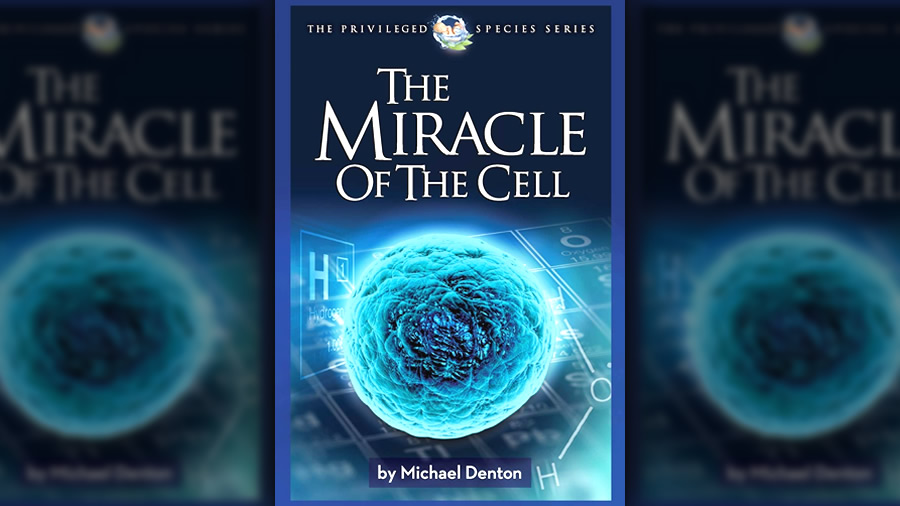 Michael Denton has been a perennial thorn in evolution’s side. And he’s at it again.

The Miracle of the Cell is Denton’s latest book in his successful Privileged Species series. It’s just hit the bookshelves, dealing another decisive blow to the fashionable idea that you are an accident.

Paleontologist George Gaylord Simpson once declared that “man is the result of a purposeless and natural process that did not have him in mind.” That’s the received wisdom of evolutionary theory. Almost all of academia agrees.

Denton, who is a microbiologist from Australia, does not wade directly into the current debate over evolution. He doesn’t specifically address Simpson’s claim either. He doesn’t need to. Instead, in The Miracle of the Cell he concentrates on one example of fine-tuning after another. Thus he shows persuasively that Simpson’s pronouncement was quite premature. In fact, it’s at odds with the best scientific evidence.

Biologists may have once held simplistic notions about the origin of life, back in the heady days following the iconic Miller-Urey experiment. They may have thought they were on the right track toward explaining life when the double helix was discovered in the 1950s. It might have seemed that the cell was simple enough to explain by a few accidents here and a handful of lucky chemical reactions there. Research since then has put that false hope to rest.

Denton’s most famous work was his 1985 book Evolution: A Theory in Crisis. It was both a thunderous wake-up call and an effective rallying cry. Denton inspired countless persons with both the courage and the tools to question naturalistic evolution. The late Philip Johnson, credited by many as the founding leader of the Intelligent Design movement, was one of them. So was biochemist Michael Behe.

Denton followed that in 1998 with Nature’s Destiny: How the Laws of Biology Reveal Purpose in the Universe. In it he explored the fine-tuning in physics and chemistry, and challenged the standard ideas of unguided natural selection.

It might have once seemed that the cell was simple enough to explain by a few accidents and a handful of lucky chemical reactions. Research has since put that false hope to rest.

The Miracle of the Cell is the fourth book in a new series addressing the uncanny coincidences that make life possible. Denton has previously looked at surprises in humans’ ability to harness fire. He’s explored the astonishing characteristics of water. He’s shown how sunlight has properties that work amazingly with our atmosphere to enable life as we know it.

The Miracle of the Cell now brings the fitness argument closer to home: the very cells making up the organisms on our fair planet, including you and me.

Many have written about the universe and the fine-tuning of the laws of physics and chemistry, including Denton. Many have also written about molecular machines and cellular systems. Biology displays a wondrous, irreducible complexity — and it points inexorably toward design.

Fewer, though, have written of the fantastic world of atoms and elements, and the unexpected ways their properties enable life. These basic building blocks of chemistry are uniquely suited to the cell’s needs. Denton invites us down into the fundamental depths of the cell, into the tiniest parts of the molecular machines that make cells what they uniquely are.

Carbon has exactly the properties needed to allow life’s chemistry to work. Water is amazingly designed as the matrix in which life can happen. Even the way atoms bond is fine-tuned for life. With examples like these, Denton takes us on a journey of discovery at the most basic level. Although I am not new to the field, as I read I kept exclaiming “What?!” and “Are you kidding me?!”

Allow me to detail just one remarkable example from the book.

Of Turbines and Pumps

Many readers will be familiar with ATP (adenosine triphosphate). It serves as the energy currency of the cell, so its function is critical to large organisms such as you and me. ATP is produced by a sophisticated molecular machine, ATP synthase. This remarkable machine is embedded in the membrane of the cell’s mitochondria, its power generating center. It functions as a miniaturized turbine, powered by the flow of protons from high to low concentration across the membrane.

We rarely give a second thought to our body’s energy production. Robots use a battery pack and long lengths of wiring to transfer electricity. It’s terribly primitive compared to our cells. There are quadrillions of nanoscale proton-powered turbines scattered throughout the human body. You read that right! Quadrillions of miniaturized turbines. They whir away second after second, day after day, keeping you and me alive and upright and ready to tackle our next daily tasks. The most unhinged science fiction writer could scarcely dream up what we find in the cell!

Denton shows the reality of purposeful planning and design at work, down to the most minute particles in the cell.

Yet what enables ATP synthase to function? Astonishingly, it’s merely the smaller part of a larger suite of machinery that keeps the proper concentration of protons on each side of the inner mitochondrial membrane. If it were functioning solely by itself, the concentration of protons on both sides of the membrane would quickly equalize. That would end the natural forced flow across the turbine. And it would bring ATP synthase (and you!) to a grinding halt.

So it has to work as part of a highly coordinated team. No less than four additional molecular complexes work to keep pumping protons back through the membrane in a never-ending race to keep up with ATP synthase.

This molecular system holds a series of atoms in exactly the right order and in just the right place as measured on an atomic scale. It allows electrons to jump from atom to atom, which in turn allows protons to pump back to where they need to be. Picture an atomic-scale version of a child’s toy Slinky walking down a staircase, with tiny packets of energy captured and put to work with each bounce along the journey.

It’s a hugely complex and functional system of systems. It cries for an explanation beyond simplistic evolutionary just-so stories. Clearly it points toward purposeful design.

Yet it is not just the existence of such remarkable molecular machines. Denton encourages us to peer even deeper to the actual atoms at work in this engineering marvel. It takes exactly the right atomic-level properties to allow these electronic circuits to work. Yes, building a molecular machine is amazing. But we need to have the right parts in the first place or we won’t get far. Denton argues that the very atoms of life appear suspiciously ordained for their particular purpose.

Fitness All the Way Down

Denton is open to the possibility of life flowing out of the fabric of the universe and its elements. By no means, though, does he believe the Darwinian story of a purposeless and unguided process. He’s convinced that life is only possible due to an astonishing “ensemble of fitness in nature.” This “primal blueprint,” Denton argues, “is written into the laws of nature from the beginning,” long before the cosmos came into material existence.

Is there design to the universe? The Miracle of the Cell adds a crucial piece to the overall puzzle. Denton shows the reality of purposeful planning and design at work, down to the most minute particles in the cell. We are not dealing with a small handful of interesting “coincidences.” Rather, this fitness for life — objective, identifiable, evidence-based fitness — is manifest nearly everywhere we look.

It all adds up: We are not here as a result of some cosmic accident. We came about through purposeful planning. This design was deeply embedded in the fabric of the elements long before life, or even the Earth, was first formed. Physicist and mathematician Freeman Dyson once famously remarked that “the universe must have known in some sense we were coming.”

Not just the universe, but the very atoms of which we are made.

Eric Anderson is an attorney, software company executive, and co-author of the recently-published book, Evolution and Intelligent Design in a Nutshell.