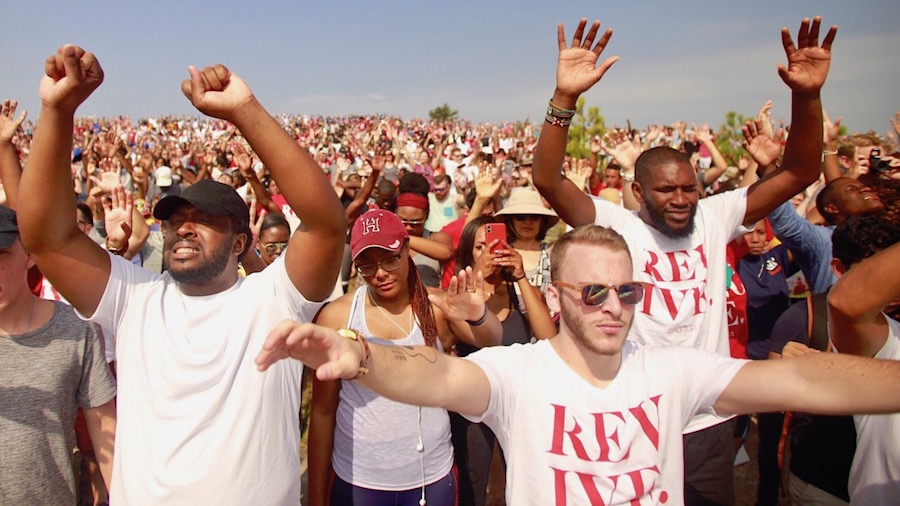 On August 25, 2018, more than twenty thousand believers gathered at Stone Mountain Park in Atlanta, Ga. for a prayer and worship event hosted by interdenominational Christian coalition OneRace. Hundreds of churches across the region participated.

Starting Friday, a group of 300 pastors and lay leaders will gather in Atlanta for The 400 Conference. The gathering takes its name from a commemoration so difficult, it is rarely discussed.

“This year, our nation is acknowledging 400 years since the initiation of slavery in Jamestown in 1619,” said Bishop Garland Hunt, co-founder of conference host ministry OneRace. “Fast forward over the years, and we still feel the impacts of slavery in the black community.”

Civil rights icon Dr. John Perkins will join Louie Giglio, Justin Giboney, and others in addressing this racial reconciliation summit. It follows an event last summer so unique that even media outlets like the New York Times could hardly ignore it.

In blazing heat, more than 20,000 Christians gathered at Stone Mountain in Atlanta on August 25, 2018. At the inaugural OneRace gathering, they worshipped, prayed, confessed, and declared unity across longstanding racial divisions.

This summer, OneRace leaders plan to go deep rather than wide — starting with The 400 Conference.

“Today, so many brothers and sisters in the Body of Christ are joining in, including Baptist, Presbyterian, charismatic, and non-denominational,” says Hazen Stevens, co-director of OneRace. “It feels like really broad representation.”

‘One Blood And One Race Together’

According to Barna, only half of practicing Christians believe that the nation’s tragic history of racism has aftereffects today. OneRace co-leaders urge believers to learn past history and have a proactive anti-racist stance today.

“We believe the Gospel has the solution for all social ills,” says Josh Clemons, a local adjunct professor and OneRace co-director. “But the thing that gets me is silence. Many leaders are afraid to speak up against racism. They feel it’s not a Gospel issue or an idea the church should lead on.”

The conference will be followed by an invitation for Christians to participate in a 21-day fast. Their multi-part “journey” will conclude Sunday, August 25 with a regional church simulcast event. Leading voices of prayer, worship, and dialogue will originate from dozens of Atlanta-area churches.

“When we have revival, the church will stand together in one accord” — Bishop Garland Hunt

A local minister, Humphrey noted he had spoken to “five different friends of different ethnicities” to understand how the words impacted them. “The ‘Go back where you came from’ tweet and ‘Send her back’ chant were wrong, hurtful, and should be repented of and repudiated,” he said.

In a phone conversation from Atlanta, OneRace leaders Hunt, Stevens, and Clemons share about this year’s strategy and why confronting racism matters. It has been lightly edited for length.

Why is this summer particularly important for the message of racial reconciliation? Bishop Garland Hunt: It’s important to look back at the generations that have gone before us. What did chattel slavery involve? Just get the picture of slaves being brought in chains, in bondage, and auctions separating families.

People were bought and sold. Women were treated as sex objects. Children hated white people because they saw their parents being beat up and taken away from them and sent out to other plantations. Basically, blacks were regarded as chattel.

As a nation, 400 years ago, we came through the threshold of something that was evil. Today, problems that persist in the black community are related to family structure, economic opportunities, and homelessness.

The 400 Conference is about taking us a step further. We will cry out to God for forgiveness and restoration. As a nation, we lament this iniquity and the way we have allowed it.

From there, we can see what has happened, where we are in the narrative, and how we can change it. The church can work together to right the wrongs of the past.

We can move things forward and begin to rebuild communities. It’s working towards biblical justice, which is looking out for the poor and doing everything we can to bring us to an equal place in our society.

As you and Hazen speak to local pastors, how do you connect justice, revival, and the Gospel? Josh Clemons: Revival and justice are connected and combined in the Gospel message. All three are inextricably linked.

Here’s the difficulty. The Gospel has largely been seen like the song “Jesus Loves Me,” which is about myself and my salvation.

That’s how we as Westerners like to think of our faith walk. Yet the Gospel has implications — that we would love brother and sister, Jew and gentile, and all people who are different than we are. The Gospel calls us to unite.

Even on issues that divide us, the Gospel calls us to speak the truth. Pastors are beginning to see that and awaken to it.

Last year, more than 550 pastors were part of OneRace Stone Mountain. Have that many remained engaged with the vision of OneRace?

Hazen Stevens: Leading up to and following OneRace Stone Mountain, we’ve had about 200 pastors in our direct relational network. At that big event, we saw a larger representation of the broader Atlanta metropolitan area.

The core OneRace network has remained intact and engaged through small groups and regional prayer gatherings. We’re also building new relationships. Passion City Church, Northpoint Community Church, and Word of Faith are large ministries in our city that have all decided to participate this year.

Our challenge moving forward is to refocus on groups. Small groups fuel the catalytic events and make them meaningful. Those are where people get to talk about the heart issues and build deep relationships. It’s where prayers are sown.

How churches and leaders participate in small groups will determine the future of OneRace.

What is the greatest challenge facing Christians today? Stevens: Oftentimes, we the church are so enmeshed in the world’s view of things. Daniel was faithful and resolved to address issues of sin and live a life of holiness. From that place, he had wisdom like no one else to solve the problems of his day.

The biggest problem in the church is that we’re not heavenly enough to do any earthly good. We need to set ourselves apart to God through prayer and fasting in sanctified holiness. By God’s grace, we can ask him for a higher wisdom and public witness.

In this movement, we desire to address these political, social, and personal problems. But our heart is to start by being spiritually hungry people who are pressing into God. We can’t end with prayer, but it has to be our starting point.

It’s so simple. But if the church would actually do that, we will get the solutions and wisdom of heaven that can change the culture.

When you survey how Christians are confronting racism — or failing to — how do you respond?

Clemons: Silence is what grieves me the most. It’s a day in which you can send a tweet and have stump events where “Send her back” is chanted and shared.

For communities of color in particular, it’s painful to witness those things. The majority of Christian leaders aren’t speaking up about the divisiveness in the political space.

If our President is a confessed believer, then believers should hold him accountable. When we wink at sin, we redefine what love and faith really looks like in the public square.

On one front, the silence is deafening. Then leaders who speak up about the evils that are before us don’t get a lot of play. Many white brothers, and people of color as well, have been speaking the truth.

I don’t think we encourage leaders enough who are using their pulpits, platforms, and influence to speak truth.

Bishop Hunt: The world is doing everything it can to muzzle the church. I believe we are in the process of a major onslaught in our culture.

Soon we may not have the ability to speak forth the truth without hindrance or preach in the marketplace. We are going to face great hostility, so it is incumbent on the church to work together.

It’s more than just saying ‘we can be one’ and singing “Kumbaya.” The church has to stand together in one accord, which is what happens when we have revival.

Out of that, we become bold about what we believe. When persecution comes, we will fight through it and stand for the cause of Christ no matter what goes on.

Know the Story, Own It, Change It

How will this year’s Day of Remembrance differ from the Stone Mountain gathering in 2018?

Stevens: The gathering last year was about righting historic wrongs. In 1915, a pastor went to the top of the Stone Mountain and burned the first cross to restart the KKK.

Last August, we ascended that hill in an opposite spirit of love and reconciliation.

There is an educational piece to what we’re doing this year — which is why we’re hosting The 400 Conference. More than knowing single events, we want to invite people to understand the church’s place in the history of our nation.

A lot of times, the church has unfortunately stood on the wrong side of history. In light of that, how do we own that story?

I believe the prophet Daniel is emblematic of this. He was a blameless man whose enemies said they could find no fault in him.

But we read his prayer in Daniel chapter 9. He said, “To me and to my fathers belong shame of face.” He owned the transgression of his people.

“Unconfessed sin has a spiritual weight. If we don’t own the sin of America, who is going to?”

If we don’t own the sin of America, who is going to? We are called to take responsibility for it. Unconfessed sin has a spiritual weight, both generational and the present sin in the heart of the church. We have to know and own it.

Once loosed of that baggage, we can create a different future based on a heavenly blueprint.

This weekend, OneRace will host The 400 Conference at Ebenezer Baptist Church in Atlanta. On Sunday, August 25, churches across the region will participate in the Day of Remembrance which will also be simulcast live online.