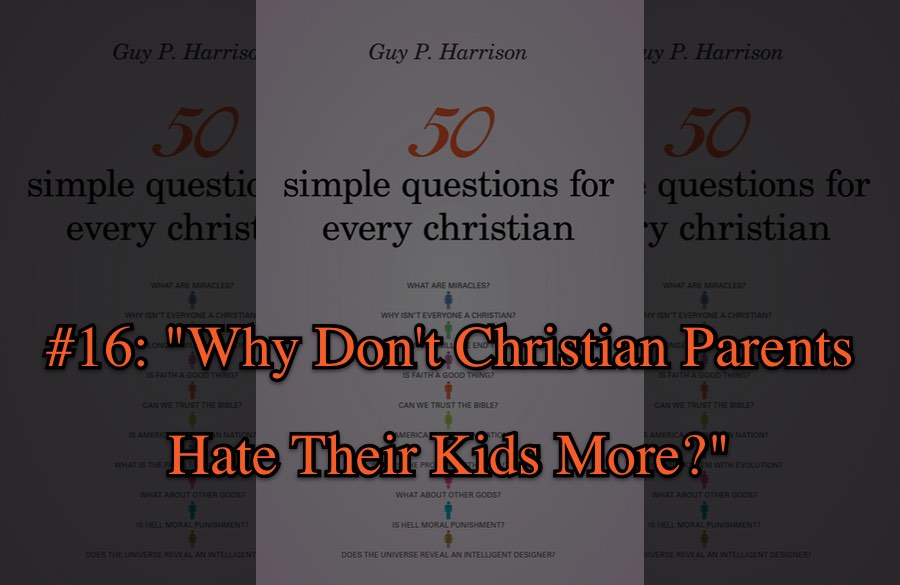 First I dropped the book in anger and in disbelief. A bit later I almost threw it across the room. You’ll see why.

The question Guy Harrison claimed to be asking in this chapter of 50 Questions was, “Should Children Be Christians?” What he was really asking, though — and he should have realized it — was simpler. “Why don’t Christian parents hate their kids more?”

He opened the chapter with the story of a Muslim madrassa he’d visited in New Delhi, where thirty boys, age 8 to 12, were being taught from the Koran. Everything came from the Koran. “What about math?” he asked the teacher. “No problem, we can teach anything. It’s all in the Koran.” Nothing from maps, nothing about continental drift, no biology or physics, except from the Koran.

Their education, he said, “was inept and incomplete … because of a religious choice. … there was no thinking going on. … It was indoctrination, not education.”

That’s his description of the madrassa, not mine. I can’t say a word for or against its accuracy. What bothered me was when he said Christians “never make the connection between what was going on in that school in India and the way millions of children are being taught Christianity every day around the world.” That’s when I dropped the book.

So the fact that Muslims’ children in New Delhi aren’t being taught science or math at all tells us there’s something wrong with the fact that we teach our kids Christianity?

Harrison scorns the way “religion is taught to very young children as being factual and necessary — without a hint or whisper of skepticism and critical thinking.” The “key problems” are the same as in the madrassa, he says, specifically pointing to the way kids are taught from age two to twelve.

“Skeptics of religion have big problems with this,” he says, “because it feels wrong. It seems very much like intellectual bullying.”

He’s full of great advice for Christian parents who don’t want their kids to have anything to do with Jesus Christ. Parents who think their kids should miss out on the best thing that’s ever happened to them. Parents who hate their children.

It’s a good thing I’d had fair warning, time to prepare my mind and steel my emotions. Otherwise I might have flung the book right across the room. Well, no, actually I have more control over myself than that. But it wasn’t because Harrison’s “intellectually bullying” idiocy didn’t deserve that kind of treatment.

Harrison recognizes we believe “Christianity is the ultimate truth and source of goodness, but why not let the religion stand on its own strength?” Why can’t they be like many atheists and skeptics, including Harrison, who “do not teach their children not to believe in gods”?

Teaching His Pre-Teens To Do Comparative Religion. Impressive!

“When my children were very young,” he boasts, “it never once occurred to me that I should sit them down and instruct them to reject Bible stories. … That would be telling them what to think, rather than how to think.”

Good for him! How virtuous. Amazing, too! He taught his eight-year-olds how to think. They must have been geniuses. If they were learning how to manage comparative religion, they were prodigies. For most kids, the ability to think in abstract concepts doesn’t even begin kicking in until about age twelve.

I’ll grant him one not-quite-point. If he’d been talking about teenagers instead of pre-teens, I’d have agreed that parents need to start teaching them the arguments both for and against Christianity. That’s when kids start becoming developmentally able to work with those kinds of questions.

It’s okay: Christianity, properly understood, can handle the pressure. Too few Christian parents do that, and therefore not enough Christian young adults can handle the arguments as well as they should be able to.

Harrison Indoctrinated His Kids, Too

But he was talking about pre-teens. So I’ll say it: If Harrison thinks he was teaching his eight-year-old kids openness to belief, he’s a fool. He wasn’t teaching them openness, he was teaching them religion is false and/or irrelevant. He was closing their minds to it, as surely as the Muslim dad closes his kids’ minds to Hinduism.

If he thinks he taught them religious open-mindedness he’s a fool. He was indoctrinating them, just as surely as any Christian parent. Just as surely as two kids in my extended family (who must remain unnamed) were indoctrinated by their parents, who chose to raise them “in all the traditions.” Neither of the two children chose to follow any religious tradition, unsurprisingly.

It’s simply unbelievable that he could fail to see that. Or that he would think parents could even help teaching their young children what they consider important. Kids catch that kind of thing from their parents; it’s unavoidable.

He thought his kids — at that age! — should “think independently about religion and make up their own minds.” That’s incomprehensible. And unloving. To do this is to invite your own kids to reject what you are convinced is true. It’s guiding them to choose what you regard as false.

Except it can’t be done. Harrison wasn’t guiding them to make up their own minds, not at that age. I’ll guarantee his kids even today believe exactly what he taught them — that no religion is right for them — unless they’ve encountered wiser teaching since then.

The Atheist’s Foolish and Hateful Counsel

One of the parents I mentioned in my extended family has since become a believer, and is trusting God to redeem lost teaching opportunities from the kids’ childhood. There’s significant pain there, now, though. I feel it too, believe me. These now-adult kids of theirs are my family members, too. Do you see why Harrison’s advice both astonishes and angers me?

He’s full of great advice for Christian parents who want their kids to have nothing to do with Jesus Christ. Parents who think their kids should miss out on the best thing that’s ever happened to them. Parents who don’t care if their kids die in falsehood. In other words, Christians who hate their own children.

No books were harmed in the preparation of this article. But it took some real self-control.