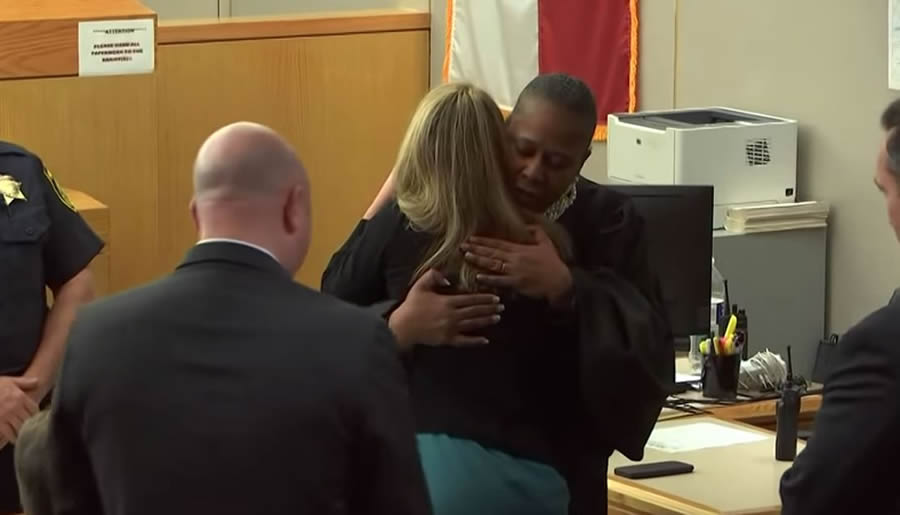 The Freedom From Religion Foundation (FFRF) filed a complaint Thursday with the State Commission on Judicial Conduct against the judge in convicted murderer Amber Guyger’s trial for giving Guyger a Bible after sentencing, CBS reported.

Guyger was convicted of killing Botham Jean after she mistakenly entered his apartment and thought he was an intruder. Following the sentencing of Guyger to 10 years in prison, State District Judge Tammy Kemp hugged Guyger then left the room. She returned with a Bible for Guyger. “You just need a tiny mustard seed of faith,” she told Guyger. Then the two embraced. “You haven’t done so much that you can’t be forgiven,” said Kemp. “You did something bad in one moment in time. What you do now matters.”

The atheist group filed the complaint immediately. According to their website, FFRF exists to “promote the constitutional principle of separation of state and church, and to educate the public on matters relating to nontheism.”

In their complaint, the group states:

We write to raise your awareness of Judge Kemp’s actions at the close of the trial — during which she gifted a Christian bible, instructing the convicted criminal on how to read the bible and which passages to pay attention to, and witnessing to that convicted murderer. These proselytizing actions overstepped judicial authority, were inappropriate and were unconstitutional.

Courtroom video shows that after the sentencing and the victim impact statement, Judge Kemp left the courtroom, then returned holding her personal bible. She walked over to Amber Guyger at the defense table and proceeded to preach.

CBS 11 asked Dallas County District Attorney John Creuzot if the judge’s actions were “a violation of court procedure, policy or protocol.” He stated that it was not, and he would defend the judge.

If anyone complained, I would do everything I could to support the appropriateness of it. I can’t tell you I’ve done the same exact thing, but I have spoken to defendants, have I given them a hug, perhaps. Not given a Bible, that’s not me, but I don’t think there’s anything inappropriate about what she did, and I would support that, if anyone tried to file a complaint, I would do my best to intercede and protect her.

“I Think It Despicable Here”

First Liberty Institute “is the largest legal organization in the nation dedicated exclusively to protecting religious liberty for all Americans.” First Liberty has stated that they would defend the judge. Hiram Sasser is the General Counsel for First Liberty. He said in a statement that rather than celebrating the judge’s compassion and mercy the judge demonstrated, FFRF is protesting her actions. “We should all be thankful that the law allows Judge Kemp’s actions and we stand with her and will gladly lead the charge in defending her noble and legal actions.”

Jeremy Dys, Special Counsel for Litigation and Communication for First Liberty, agreed. “The very fact that someone would complain about a judge demonstrating her humanity and trying to provide a measure of mercy and kindness to a sentenced felon now, I think it despicable here.”