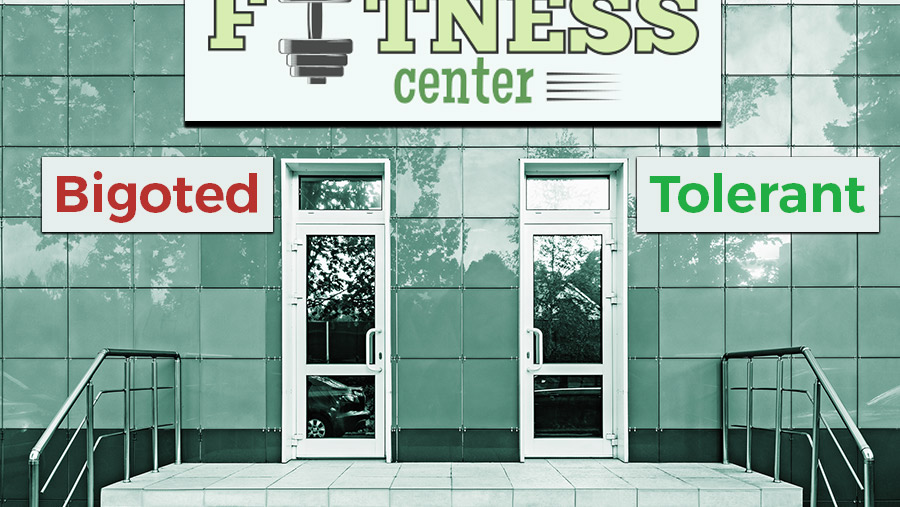 View this as an anti-parable: a short story teaching principles no one should follow. It would be wrong in at least two ways, as we’ll see. Unfortunately some people in the LGBT movement follow one of its principles anyway.

There’s a gym nearby that’s come up with a creative answer to the bigotry problem: Separate facilities. Bigots work out in one space, tolerant people work out in another. It works brilliantly: Bigots like it better when they don’t have to hide who they are. Tolerant people have no desire to see that kind of behavior on display.

When you join you take a personality test. The club assigns you to the space you belong in, either “Bigoted” or “Tolerant.”

Bill and Mike happened to be in the “Tolerant” weight room the other day, when someone stepped out of the women’s locker room wearing a bright pink workout suit with running shoes, headband, and fingernails to match — and also sporting a bald head, wide shoulders and a full black beard.

He wasn’t exactly subtle about it, so member-in-pink strode over and glared at him: “Excuse me, but did you just call me a guy?”

“Well, thanks for thanking me, sir, but I’m not actually going to call you she. I’ll go with what I see with my own eyes, which tell me you’re a he.”

“What!? Are you serious? Here in the Tolerant room? How can you do that here? You belong in the Bigot space!”

“Why do you say that? I’m tolerant. Why shouldn’t I be in this room?”

“Whoa, slow down,” interrupted Bill. “Look I’m sorry, but you look every bit like a guy to me. Other than all that pink, I mean. So tell, me: What makes you think you’re a she?”

“It’s my gender. Look, do I really have to explain it to you? I was assigned male at birth, but I’m a woman on the inside, so I’ll expect you to treat me as one. And I’ll thank you now to either quit calling me ‘he,’ or else haul your bigoted body over to the other side of this place where you belong.”

“Assigned Bigoted but Identifying as Tolerant”

“But I’m tolerant, sir. This is my space here, just as much as it is yours.”

“What?” demanded Britney. “You’ve got to be kidding. There’s no way you tested as Tolerant when you joined!”

“No, I didn’t. You’re right about that; I was assigned Bigot upon joining. But that’s okay. Just ask Mike over there. He was there with me a couple months ago when I said I feel tolerant on the inside, and I would identify that way from now on.”

Mike glanced back at them and nodded. “That’s right. I’ve decided he’s a lot easier to get along with than he ever used to be, now that I see him as the tolerant guy he’s always been on the inside.”

That was about all Britney could stand. “No! You’re NOT tolerant! You’re every bit a bigot, you intolerant jerk!”

“Well,  I guess you didn’t hear me then. Yes, I was assigned Bigot, but that was just on the outside. I’m really quite Tolerant on the inside. So I’ll expect you to treat me that way. And I’ll thank you now to quit calling me a bigot, please; or else take yourself on over to the Bigot side where you belong.”

So Where Did Bill Go Wrong?

Yes, Bill went wrong. In at least two ways. Or did he? Is it really wrong to “identify” by what you feel you are on the inside, and make others treat you that way, regardless of what you may be on the outside? I certainly think it is, but I don’t see how Britney could say the same. Britney’s an obvious man “identifying” as female; Bill’s an obvious bigot (by today’s standards) “identifying” as tolerant. What’s the difference? Why can Britney re-identify himself, but not Bill?

In case it needs saying, Bill also goes wrong by starting an argument that can’t go anywhere useful or positive. It’s just playing gotcha, scoring points that don’t do Bill, Britney or Mike any good. So I definitely do not recommend you do this with a real trans person.