The Politically Incorrect Guide to Immigration is published today. 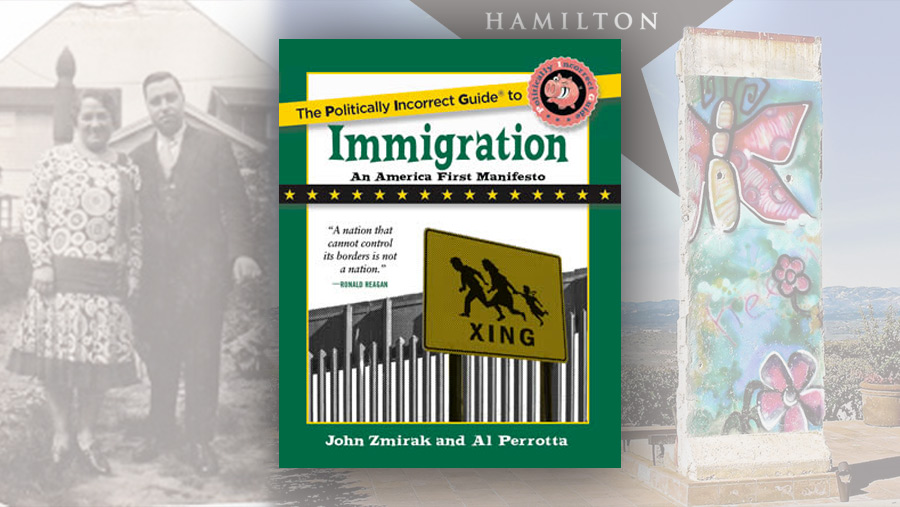 Today, as John Zmirak and I see the publication of our Politically Incorrect Guide to Immigration, I’m thinking of Ronald Reagan. Not because his “A nation without borders is not a nation” is on the cover. Not because we discuss and dissect the so-called Reagan Amnesty. Mostly, I’m thinking about the Reagan Library.

Ever been to the Reagan Library? The Ronald Reagan Presidential Museum and Library rests on a hilltop overlooking Simi Valley, California. It’s a stunning vista. In the distance, if the weather is right, you can see all the way to the grand Pacific Ocean. Few spots can match the drama and power of watching a sunset from the Reagan Library, the fading light casting oranges and reds and purple hues on the graffiti-covered remnant of the Berlin Wall. At this shining museum on a hill, America’s history, beauty, fortitude, future and optimism meet.

But with the vista comes a warning. Running just off the terrace, a few inches into the grass, you find an occasional sign at your feet. The signs feature a snake and warning to stay on the sidewalk. Rattlers abound in them there hills. And other dangerous creatures.

Stay on the Path

When it comes to the immigration debate I’d argue most Americans are like those signs. We simply want to say to those who are hoping to enter the country, “Stay on the Path!” We’ve built a path to the door and beyond the door is the American Dream. Just stay on the path.

Those who decide to forgo the path are subjected to assorted snakes and spiders … and coyotes. Those who decide to forgo the path are showing no respect for our preservation or property or rights. The path does curve; yes, more than it should. And yes, it’s currently a mess. (Which is why we wrote the book.) But that does not mean you get to cut straight across in front of those who honor the signs and directions. Stay on the path. Stay true and it takes you to a shining city on a hill.

I’m also thinking about Reagan’s Vice President, George H. W. Bush. Seems he took in a performance of the musical Hamilton down in Houston the other day. The former President even wore Hamilton inspired socks for the occasion. (Would he wear fur if he went to see Cats?)

Finally had the chance yesterday to catch some new friends in action @HamiltonMusical — properly attired in Hamilton socks, surrounded by family and friends, epic story and performance. Not a big hashtag man, but congratulations #HamFam!! pic.twitter.com/ZGvMGnqlOj

Here’s the funny thing about Hamilton the Musical. As we discuss in the book, Alexander Hamilton himself would likely not be welcome at his own musical. Remember shortly after the 2016 election when Mike Pence was browbeaten by the cast for President-elect Trump’s position on immigration? Compared to Hamilton, Trump is Nancy Pelosi. Listen to his warning:

The United States have already felt the evils of incorporating a large number of foreigners into their national mass; by promoting in different classes different predilections in favor of particular foreign nations, and antipathies against others, it has served very much to divide the community and to distract our councils. It has been often likely to compromise the interests of our own country in favor of another.

That’s a lot of words to say “America First.” And Hamilton himself was an immigrant. Hamilton, like the rest of our Founders, had very specific ideas about who should be allowed to enter our country. But he also understood that immigration, properly done, would serve the new nation well. To that end, he gave us a phrase worthy of a song. He spoke of “a harmony of ingredients.” Folks like to describe the U.S. as a “melting pot.” But isn’t a “harmony of ingredients” a much better, healthier aim?

We can’t just go throwing all sorts of items into a pot and assume the results will be delicious. Actually, it has often proven poisonous. A harmony of ingredients sings of diversity but with compatibility, elements slowly stirred into the bowl in proper proportions. It is a theme we return to throughout the book.

I’m also thinking of our grandparents. No, they were not Presidents, Vice Presidents or subjects of any musicals. Nobody gave them a Tony. Just an opportunity to make a better life — an American life — for their families. They pushed and scraped. They hung on when so many others who came over from Europe returned home. They did not wave the flags of their native country while demanding more and more from the citizens of their new country. They did wave their sons off to war to fight for our country.

I’m thinking of them because only in America would you find a scene like Saturday night: A Yale-graduating Catholic grandson of a coal shoveler from the Habsburg Empire and the Evangelical comedy writing grandson of an Italian musician toasting their new book at a Hari Krishna-run Indian restaurant in a Hispanic neighborhood in the heart of Texas.

Figuratively — and literally — a “harmony of ingredients.”

Hamilton, Grandpa and the Gipper would applaud.

Al Perrotta is Stream Managing Editor and co-author with John Zmirak of the just-published Politically Incorrect Guide to Immigration. It is available from Regnery on Amazon, Barnes and Noble and in book stores far and wide. Who knows? If we sell enough copies maybe they’ll make a Broadway musical out of it.