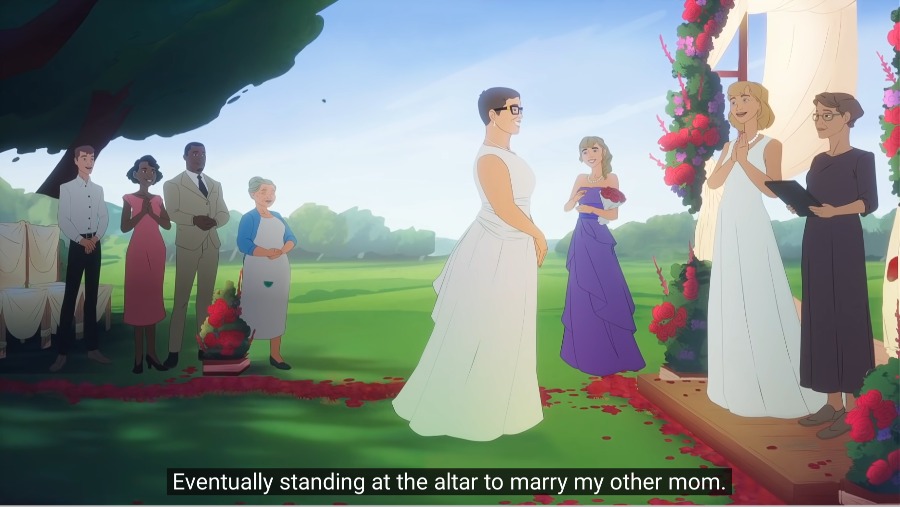 Ted Cruz was right: The Army’s “Emma had two moms” recruiting video is awful. He called it emasculating; I’d say it’s way too fully “woke,” and it’s got a lesbian political statement that doesn’t belong with military recruiting.

Dare I say it’s even worse than that, though? It’s a cartoon, for crying out loud; and when the cartoon Patriot missiles are launched and the cartoon smoke billows with the cartoon “boom” and the tiny voice says she’s a “soldier who operates your nation’s Patriot missile defense systems,” it’s hard to escape the impression that it’s recruiting to a cartoon Army. Watch it and see if you don’t agree. It’s disgusting. Compare it to Chinese or Russian recruitment ads, and it’s downright chilling.

Cruz got attacked for “criticizing” the greatest army in the world. No, he was criticizing an ad campaign that wanted to turn the very serious, difficult, dangerous, and crucial mission of the United States Army into Saturday morning entertainment — recalling, of course, that Saturday morning can’t be Saturday morning these days unless it’s fully “woke.”

That’s despicable, but guess what: It gets even worse. Emma’s cartoon was one of five the Army’s recruiters recently released under the banner of “The Calling.” Cruz was concerned (rightly) that this one promoted an emasculated army. Take them all together, though, and you’ll see what else the Army is recruiting for. It isn’t pretty. Or maybe it is. Too pretty. And definitely way too Disney.

Janeen tells how she wanted to grow up and be like her dad. David grew up thinking it would be “the coolest thing in the world” to fly a helicopter. Jennifer grew up wanting to help people. Emma was “already fighting for freedom” as a girl, marching for gay rights.

That’s four out of the five. That’s what brought them to the Army. Service? Sure, with Jennifer. Sacrifice? The real soldiers behind these stories certainly did. Other than David’s hitting the books hard to qualify before joining, though their cartoon characters hardly do at all.

Only Rickie says he wants to defend America’s freedom. (Don’t tell me Emma’s girlhood experience counts for anything. Her fight “for freedom” was a fight against other Americans, and they weren’t shooting at her.)

Not Quite All Bad

Is it all bad? Not quite. Close, though. Janeen’s cartoon climaxes with her singing, “Hey, Dad, I’ve gotta be like you.” The melody and orchestration would have fit perfectly in Frozen, but at least she respects her dad. You won’t find that in too many animated features today.

It’s the producers’ fault. They’ve turned five very real soldiers in a very real Army into Disney characters, and one-dimensional ones at that. It’s despicable.

Rickie’s story is the one real exception: It’s downright inspiring. His family immigrated to America when he was a child, and he was amazed at how far hard work and determination could take a person here. Being part of a team in JROTC at high school was “empowering.” A 9/11 ceremony inspired him to defend his new homeland.

His story was good when I saw it the first time, and even better when I listened a second time with the screen turned off. Then it was Rickie the soldier speaking, not Rickie the cartoon.

Other than that, not only do these videos look like Disney animations, they’re written like them. Emma asks herself, “What had I achieved on my own?” Her big moment came when she realized, “I needed my own adventures, my own challenge.” Ever see that in a movie?

David’s big epiphany came when his Army big brother slapped him upside the face and told him to “pursue my true dream.” That’s when he says, “I gave myself permission to pursue my dream.”

Jennifer grew “wanting to help … people who are suffering.” A stranger helped her once, and, “I remember thinking, no matter what, there are always good people in the world, and …. I knew I had to be one of those good, helpful people.

This all comes your way in full fake animation. If only I had an eleven-year-old granddaughter to watch it with me, someone who could really appreciate the art in it. I mean, someone fully steeped in Disney’s “Be the very best you that you can be!” values.

It’s the producers’ fault. They’ve turned five very real soldiers in a very real Army into Disney characters, and one-dimensional ones at that. I’ve already said it, and I’ll it again: that’s despicable.

It’s despicable on two levels. First, cartoon armies are entertainment armies. Planes and buildings and spaceships and submarines blow up like crazy, and it’s all for fun. Everyone has a good time. No animals are harmed in the making of these movies. No people are harmed.

That’s not the message we need to send anyone about the real Army. Last weekend I had my first long talk with my son-in-law, following his return home from a very long deployment in a very distant land. It was hard all the way through, except when it amped all the way up to miserable. Which was often.

That’s real Army. That’s what these five videos don’t tell us about these five soldiers’ sacrifice. I guarantee you that each one of them is a whole lot more self-sacrificing than these videos make them out to be. What a travesty.

And finally, there’s the message this cartoon campaign sends about America’s greatness. The Army is one of country’s greatest symbols of greatness, along with the other branches of our military. And here it is, symbolically reduced to “Finding Nemo.”

I don’t know who signed off on this campaign. Seems like a campaign with this much public exposure must have gone all the way up to the Chief of Staff, if not the Secretary of the Army. Is this how they see America’s greatness? If we’d all just resolve to be “the best me I can be,” then all our problems would be solved. And they all lived happily ever after.

Can’t we do better than that? Our military certainly does in real life. My worst fear in all this? That our leaders today don’t disagree with Trump’s motto of making America great. They just define “great” differently. We’re being led by people who want to “Make America Woke Disney Great.”

I sincerely hope not. This cartoon campaign doesn’t give me much confidence, though.