An Armenian-American living in Armenia reports on the attack by Azerbaijan, aided by Turkey 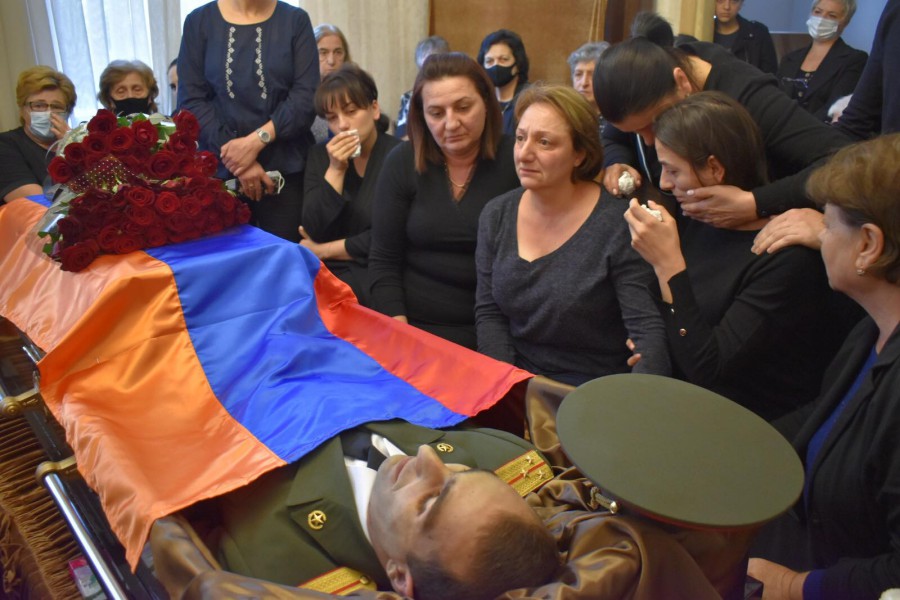 The funeral of Armenian solider Vardges Minasyan, who died fighting an Azerbaijan invasion.

During World War One, the Turkish Ottoman Empire turned against its Christian minorities. The Muslim nation controlled part of Armenia at the time, and massacred 1.5 million Armenians between 1915 and 1923. To this day, the Turkish government denies these crimes.

Today, Armenia again faces an aggressive threat from its neighbors to the east and west.

In A.D. 301, Armenia became the first nation to accept Christianity as a state religion. (It is said to have been evangelized by the Apostles Thaddeus and Bartholomew.) Armenia almost immediately faced an attack from a hostile pagan Roman emperor, but they successfully defended their land and faith. Armenia remains Christian to this day, but the tiny nation of 3 million is still fighting to survive.

In 1920, Armenia and the surrounding area fell under Soviet control. The Soviets made the disputed border region of Karabakh a semi-autonomous zone within Azerbaijan, Christian Armenia’s majority-Muslim neighbor. Its population was 94 percent Armenian. 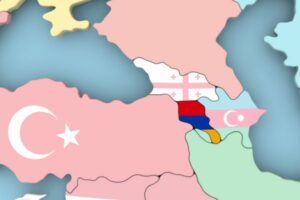 Armenia, marked by the colors of its flag, with Turkey to the west and Azerbaijan to the east.

A ceasefire has held ever since, despite a few clashes. This time, though, things feel different. On September 27th, Azerbaijan attacked Artsakh. Turkey supplies arms to Azerbaijan and is sending Syrian jihadis to fight against Armenia. Hundreds have died on both sides.

Azerbaijan has four times Armenia’s GDP and a huge military. Their stated war goal is not merely to reclaim the buffer zone. They want to conquer Artsakh itself. Armenia’s army may not be able to hold out forever.

The Azerbaijanis and Turks are betting that an international community distracted by pandemic and political instability and befuddled by propaganda will do nothing. If they’re right, Armenians could face ethnic cleansing or worse.

Sarah Stites is an Armenian-American and a friend, and a graduate of Grove City College. Now living in Gyumri, Armenia’s second-largest city, as part of the Birthright Armenia program, she works for Emili Aregak Center, which helps disabled adults. She has seen the results of Azerbaijani aggression firsthand. I spoke with her on October 8th.

How to Support Armenia

A hundred years ago, Armenians suffered a genocide at the hands of their neighbors. Now they suffer constant threat from Turkey on one side and Azerbaijan on the other.

There are many ways you can support Armenia. Support Armenia Fund, which supports Armenian civilians displaced by the conflict. Demand that the U.S. stop military aid to Azerbaijan and Turkey. Push back against Turkish-Azerbaijani propaganda that paints Armenia as the aggressor. Pray for a just and lasting peace.

When news of the invasion first arrived, Sarah didn’t know what it meant. “In July 2020, just a few months ago, there were some clashes down in Artsakh. There was concern that it could escalate, but it didn’t. There were deaths, but not very many, and it deescalated. But I also knew in 2016 there had been a war; in the 90s there had been a war. I remember getting back from a hike and learning that this is serious. I wasn’t even sure if we’d have work the next day.”

Then she started to get really nervous, she says, wondering what the war meant for the country. “We’re in the middle of a global pandemic. Nations’ eyes are turned inward. Borders are closed. America’s on the brink of a chaotic election. If there’s any time to attack, now’s the time, strategically. A lot of my friends are really worried.”

Friends at the Front

Friends have already enlisted. One of the first people was a friend and co-worker who’d served as her godfather when she was baptized into the Armenian Apostolic Church.

Tigran has returned home safely since the interview. But if the war continues, he may have to go back to the front.

The war started on Sunday, and on Wednesday morning Sarah woke up because bulldozers were filling in potholes in the street. Her roommate said, “I woke up early in the morning and heard our neighbor screaming.” Later, some of the neighborhood young men erected a banner with a young man’s name, Vardges Minasyan, and his age, 26. She had turned 26 the week before, and the difference between their lives struck her.

“On Friday, I arrived back to my home after work, and I saw the streets were just congested with cars like I’d never seen before, and there were so many people. So many people. It was his funeral. And the whole neighborhood came out to support the family, and there was just this somber, somber mood. People’s eyes were hollow. Everyone was wearing black.”

She wants Americans to know what is being done to Armenia. “I don’t blame people in the United States for being confused about the geopolitics. I’m confused too.” She wanted to photograph the scene to show people the reality. A neighbor took her into the house.

“It was horrible. There’s a tradition of viewing the body in its casket in Armenian culture, so I saw him lying there in his casket, just a shell of who he was. Just a shell of the person who fleshed out that body. His mother was sobbing. This old woman next to me was sobbing her heart out, and I felt instinctively I just had to pull her into my arms and just stroked her head.”

When she started to take a picture, the family and others told her not to. “It was so embarrassing. In front of that whole group of people, I said in Armenian, ‘I’m sorry, but I’m Armenian-American, and I really want to take — I need to take — this photo and send it home so people know.’ And they said, ‘Ok, you can do that.’”

“The priest gave a beautiful sermon,” she continued. “He said the verse about how there’s no greater love than laying down your life for a friend.”

She found out later that Vardges was already a very experienced military man. “A younger soldier had left behind his bulletproof vest during military maneuver, and Vardges removed his bulletproof vest and gave it to this other soldier. And shortly after that …. I don’t know exactly how he died. It might have been shrapnel. It might have been direct gunfire. But he died.”

Why Armenians Live the Way They Do

The country is under martial law, but it hasn’t affected the city where she lives. “For example, I think the Ministry of Health has banned any sort of elective procedures at this time because all of the medical workforce is focusing on soldiers in need of medical care. Things like that. And I guess the military are informing all government decisions at this point, but I did expect that there would be some sort of more tangible effect from martial law, but I haven’t really felt that yet.” The city hasn’t imposed a curfew, for example.

The war has taught her what makes Armenians live the way they do. “I fully admit that I have been very critical of many aspects of Armenian culture,” she says. ”Now I have a greater understanding of what it means to be Armenian, the collective trauma that they’ve faced. Intergenerational trauma, as well as in the past 30 years. For example, my roommate has seen all of the wars we talked about with Azerbaijan. Some of her ancestors died in the Genocide.”

“There’s a lot of trauma that runs in the genes of Armenians,” Sarah says, “and I think because of this they really stick together. They care a lot about having a good time because they’ve seen so many bad times. I think one of the reasons that they tend to live together in extended families and call all their relatives all the time is that they need to form those close bonds, those networks, to stay strong as this small people between two aggressive countries.”

What Americans Need to Know

When asked what she wants Americans to know about Armenia today, Sarah says: “What I wanted Americans to know when I took that photo is that every time you read an article that says that there’s a conflict someplace, these are human lives. So, just always remember to keep your humanity when you read headlines. But in this specific case, I very much and very strongly want to say that Armenia suffered an attempted genocide at the hands of Turkey, and Turkey has remained a hostile neighbor for Armenia.”

Turkey is hostile not only to Armenia, but other countries in the region. “Turkey is the main aggressor of the region. And I want to highlight the fact that Azerbaijan is a close ally of Turkey and that these two nations were clearly and strategically planning this attack. Azerbaijan aggressed.”

Speaking of the media coverage from which most Westerners get their news of places like Armenia, Sarah says, “A lot of the media are saying that Armenia and Azerbaijan need to quit their conflict, as if they’re both equally to blame. But in my understanding, no. Azerbaijan aggressed here, and Armenia was defending its own nation as well as its people that live in this Republic of Artsakh.”

“I really want people to know that Armenians are fearing,” she says. “That intergenerational trauma is rising up in them and they are getting flashbacks, not only to stories they’ve heard of the Genocide, but also to the 90s when there was a war that killed 30,000 people.” Armenians worry that no one will come to their aid. The war could escalate into another attempt to finish in the attempted genocide of 1915.

“I want the world to remember that the lead-up to genocide can be slow. It doesn’t happen immediately. And we always need to be wary and put a stop to aggressors like Turkey and Azerbaijan before things get out of hand.”

Grayson Quay is a freelance writer. He has been published in The Washington Times, The National Interest, Intellectual Takeout, Reason, and The American Conservative. He is a graduate of Grove City College and former high school teacher, and holds a masters in English from Georgetown University.