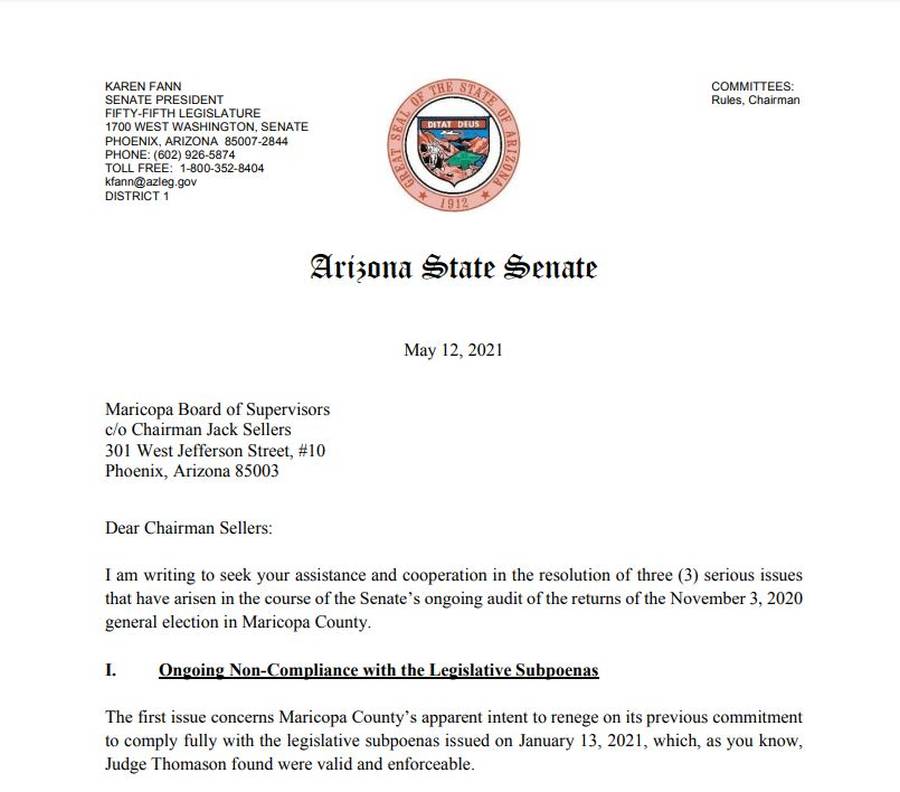 Maricopa County has some explaining to do.

According to Arizona Senate President Karen Fann, someone deleted 2020 Election databases from the county’s Election Management System just before the election equipment was handed over for the audit. Data that was under subpoena.

Breaking Update: Maricopa County deleted a directory full of election databases from the 2020 election cycle days before the election equipment was delivered to the audit. This is spoliation of evidence! pic.twitter.com/mY0fmmFXAm

What do we call it when people delete evidence under subpoena? (Well, besides “a Hillary.”). A “spoliation of evidence.” Consciousness of guilt. Potentially a crime. Certainly a kick in the rump to those dismissing election concerns as “The Big Lie.”

The Validity of the 2020 Election at Stake

In a letter sent Wednesday evening, Fann said she wants to sit down with Maricopa County Board of Supervisors chair Jack Sellers next Tuesday to  discuss the various issues that are emerging. She wants to find out what happened to the “entire ‘Database’ directory from the D drive of the machine ‘EMSPrimary’” and the “Results Tally and Reporting” data base in the EMS.

“This suggests that the main database for all election related data for the November 2020 General Election has been removed,” Fann wrote Sellers. “Can you please advise as to why these folders were deleted, and whether there are any backups that may contain the deleted folders?”

“We are entering heretofore untested waters, with the possibility of placing the validity of the entire 2020 election into question.” Dr. Kelli Ward, Arizona Republican Party Chairwoman

The Maricopa County Board of Supervisors announced an emergency meeting for Thursday afternoon to get legal advice and discuss the allegations. Allegations they are calling “reckless.”

Spin, Spin, Spin. If the allegations are reckless and baseless, why do you need a lawyer? Just some kid from IT. The databases are either there or they’re not.

Arizona Republican Party Chairwoman Dr. Kelli Ward says that if true that the folders were deleted and it turns out there are no backups, “We are entering heretofore untested waters, with the possibility of placing the validity of the entire 2020 election into question.”

Wait, Fann’s letter reveals another interesting problem: The number of ballots provided versus the number of ballots listed is often not matching up. Often there are fewer ballots than what the pink tally sheet accompanying the batch indicates. In one case, a 200-count batch was short 35 ballots.

What’s 35 ballots, Al? Let’s say you’ve got just 1 less actual ballot per 200 the paperwork says you have. In an election of 2.1 million voters, that alone means a wayward 10,500 votes. Joe Biden is credited with winning Arizona by 10,457 votes.

You can read Fann’s entire letter here. You’ll see why President Trump linked to it, calling it “devastating.” Said Trump:

The Fake News and Lamestream Media is doing everything they can not to cover this major story. They just refuse to talk or report about it. They don’t want the United States or World to see what is going on with our corrupt, third world election.

Dr. Ward summarized Thursday some of the additional issues that are being uncovered, including the theft last year of voter registration information.

Election officials say they didn’t have access to passwords that are critical, critical equipment, but outside vendors like Dominion did. Routers weren’t secure and may have been used to allow access to a network of county offices. And now Maricopa County recorder Stephen Richer has revealed in a letter to voters that he learned, prior to his term, a breach of voter identification information occurred last election cycle and is now being investigated by law enforcement.

And still the networks and the Liz Cheney’s and the liberal friends on Facebook tell you, “Nothing to see here.”

Said Ward: “We all know, we know this old adage that where’s there’s smoke there’s fire. Well, through our efforts, and through this audit, which has gained national attention, the smoke is finally clearing.”

And perhaps soon the scales from millions of eyes.