When Arguments Fail, What Do Pro-Lifers Do?

After all the arguments have failed, there is little left but prayer. And really, it should never be our last resort. 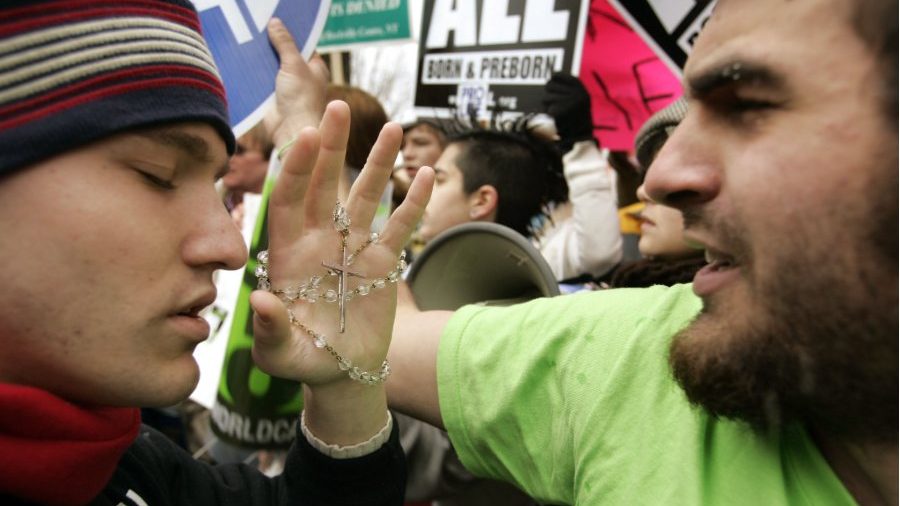 With a rosary in hand, pro-lifer Nick Schadler from Dubuque, Iowa, left, prays for pro-choice activist James Ferguson from San Diego, Calif., as pro-choice and pro-life activists face off in front of the Supreme Court in Washington Monday, Jan. 23, 2006.

Wednesday I read a heartbreaking essay in The Atlantic. “Three Children, Two Abortions” is heartbreaking because of the author’s attachment to abortion and callousness toward unborn life.

My mind churned with arguments to refute her ridiculous statements and assumptions about life, parenthood and what rights we have as human beings. But at some point, the arguments stop making a difference.

How many times do we have to argue that a girl who gets pregnant at 17 can be a mother, provide for her children and even accomplish her dreams? And that the pro-life movement is here to help her do just that?

How many times do we have to argue that adoption is one of the most loving, sacrificial things a birth mother can do? That putting her baby in the arms of an eager family, while difficult, does not give her a life of sorrow? And that dealing with the pain of giving your child to another family is abundantly worth it, if it means giving your child life and not death?

How many times do we have to argue that pro-lifers are not simply “pro-embryo and pro-fetus”? And that a baby is a baby complete with a unique genetic makeup from the moment of conception?

How many times do we have to argue that no child is more or less valuable, or has more or less right to life, depending on whether he or she is wanted by someone else?

How many times do we have to argue that statements such as, “Abortion should be as inalienable a right as life, liberty and the pursuit of happiness” make absolutely no sense? If the right to life is inalienable, a right to end someone else’s life simply because it is inconvenient or unwanted cannot be tolerated. Those two rights cannot logically coexist.

How many times do we have to argue these points and point out these truths?

By now, we ought to know that facts simply don’t change many minds. People believe what they want to believe. They hear what they want to hear. We all have biases and preconceived notions. As open-minded as we think we are, we’re drawn to the arguments that verify what we already think.

It’s not that facts and arguments have no value. Sometimes, they get through to people. Maybe someone feels the truth but lets his mind be swayed by popular arguments. A good argument helps him see the truth. Maybe a good argument gives someone the courage to say what she really believes. Some people have decided what they believe based on wrong facts or misunderstandings. They change their minds when corrected.

I pray for Deborah Copaken, who penned “Three Children, Two Abortions.” I may not be able to change her mind about the value of unborn human life. But God can. More than that, he can change her heart, offer her forgiveness, and redeem her past.

But many pro-choice people are too entrenched in their preferences to notice the dark irony of their words. They’re too attached to their arguments to notice their lack of logic. Arguing won’t get us very far. As Christian pro-lifers, what should we do?

The Prayers of Pro-Lifers

Pray. Really, prayer should never be our last resort, but our first.

So I pray for Deborah Copaken, who penned “Three Children, Two Abortions.” I may not be able to change her mind about the value of unborn human life. But God can. More than that, he can change her heart, offer her forgiveness, and redeem her past.

I also pray for all the people who hold fast to the false belief that an unborn child’s destiny — whether they die in the womb or enter the world — is our choice to make. I pray that God’s love will win over those who won’t be won over by science and sound logic.

Finally, I pray for the pro-life movement. That we exemplify love more than hate. Hope more than anger. Grace more than judgment. That we continue to find innovative ways to address the legitimate concerns of pro-choicers and pro-lifers alike. Concerns like maternal mortality, access to affordable healthcare and childcare, and more practical assistance for families in need.

Prayer that God will change hearts? There is always a time for that. And that will always be more powerful.

Abortion Advocate in NYT: The Key to Victory is ‘Cultural Change.’ She’s Right