Are You on the Verge of Wrecking Your Life? 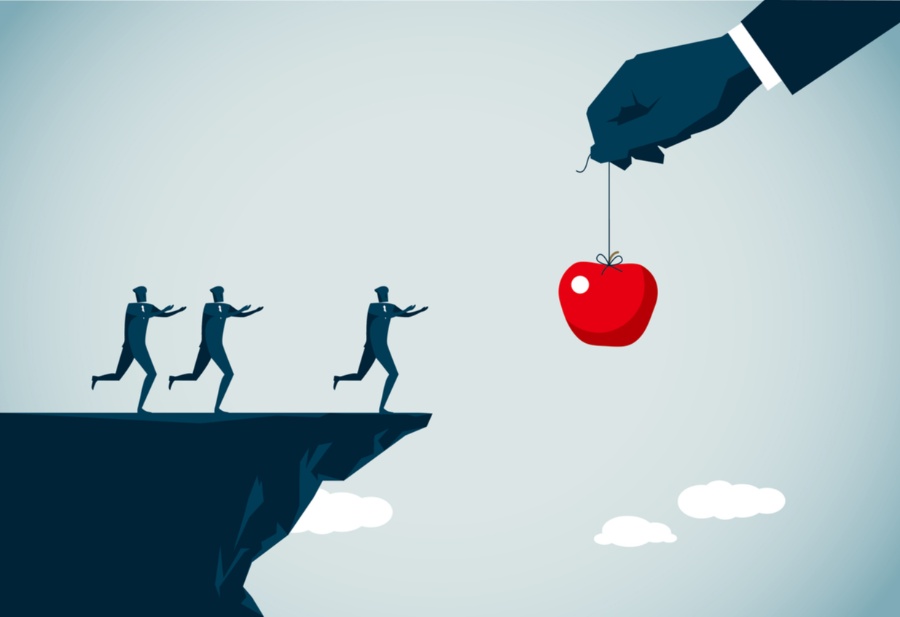 In Russell Moore’s compelling book, Tempted and Tried, a chapter entitled, Why You’re on the Verge of Wrecking Your Life (Especially If You Don’t Know It), caught my attention.

A slaughterhouse, in order to keep the cattle relaxed, should remove anything from the sight of the animals that isn’t completely familiar. The real problem is novelty … Workers shouldn’t yell at the cows, she said, and they should never ever use cattle prods, because they are counterproductive and unneeded. If you just keep the cows contented and comfortable, they’ll go wherever they’re led. Don’t surprise them, don’t unnerve them, and above all, don’t hurt them.

The cows aren’t prodded off the truck but are led, in silence, onto a ramp. They go through a ‘squeeze chute’, a gentle pressure device that mimics a mother’s nuzzling touch. The cattle continue down the ramp onto a smoothly curving path. There are no sudden turns. The cows experience the sensation of going home, the same kind of way they’ve traveled so many times before. As they mosey along the path, they don’t even notice when their hooves are no longer touching the ground. A conveyor belt slowly lifts them gently upward, and then, in the twinkling of an eye, a blunt instrument levels a surgical strike right between their eyes. They’re transitioned from livestock to meat, and they’re never aware enough to be alarmed by any of it.

The Gradual Slope Down

This is difficult to read but necessary. It is a vivid visual for spiritual warfare. Succumbing to temptation is often gradual, easy, and effortless until the enemy levels a surgical strike right to the heart. We’re often too smart to take deliberate plunges, but we’re easily enticed to take one step at a time, one compromise at a time, one bad choice at a time until we’re at the bottom keenly aware of our gradual, but deep descent.

You didn’t choose this, but you are in a war. No peace treaties can be signed, no concessions can be made, and no compromises can be negotiated. You can’t say, “I don’t want to get involved,” because you’re already a target. You can’t remain passive, aloof, or carefree against an enemy who doesn’t sleep or slumber. He is sent to steal, kill, and destroy. Wake up! Life is a battleground, not a playground.

The classic line from an old Wyatt Earp movie states it well, “You tell them I’m coming! And I’m bringing hell with me!” The same applies to us: when we make a decision to follow God’s principles, all hell breaks loose and is dead set against us. Because it is a spiritual battle, our only recourse is to engage the enemy with spiritual weapons (cf. Ephesians 6:10-20).

The Power of Obedience

When we obey God, He strengthens us. When we humble ourselves, His grace is manifested more abundantly, “Just as water ever seeks and fills the lowest place, so the moment God finds you abased and empty, His glory and power flow in” (Andrew Murray). Disobedience leads to desperation and despair.

Throughout the years, a few disgruntled readers, including pastors, have commented that I should “Ease up.” They say that “people don’t want direct confrontation.” They suggest that I come through the back door with my approach … be funny, winsome, and lighthearted.

God heals us primarily with obedience to His Word and repentance through a broken heart.

Too many are choosing talking over doing, counseling over conduct. An African pastor was asked, “Why is there so much counseling in the American church but not in the African church?” He responded, “In America you counsel; in Africa we repent.” Well said.

1 Corinthians 10:13 offers strategic insight, “No temptation has overtaken you but such as is common to man; and God is faithful, who will not allow you to be tempted beyond what you are able [We can say “No”], but with the temptation will provide the way of escape also, so that you will be able to endure [bear] it.” The door swings both ways — you can enter or exit.

This Too Shall Come to Pass

To “bear it” means that we are not trapped; we are not without hope. God will help us carry the load. When we see something we need, desire, or want, our first impulse is to act on it. The pressure feels unbearable and we cave in.

This defining moment is often the most difficult when overcoming temptation. “Do you not know that when you present yourselves to someone as slaves for obedience, you are slaves of the one whom you obey, either of sin resulting in death, or of obedience resulting in righteousness?” (Romans 6:16). When we indulge in sin, we are presenting ourselves as slaves to the desire. It’s important to resist at the lowest level and at the first opportunity.

I’m not discounting the deep emotional and psychological pain of bondage to sin, or emotional trauma, but I do want to remind you that God makes provision for all of our needs through a relationship with Him and obedience to His Word.

Counseling with those skilled in the Word is invaluable, and desperately needed, but all the counseling in the world will not work if the heart is not right. God heals us primarily with obedience to His Word and repentance through a broken heart: “He sent His Word and healed them, and delivered them from their destructions” (Psalm 107:20).

We must stop fighting this fact. Disobedience never leads to victory.

What Motivates Sin (and How to Fight It)

How to Teach Your Child He Isn’t God