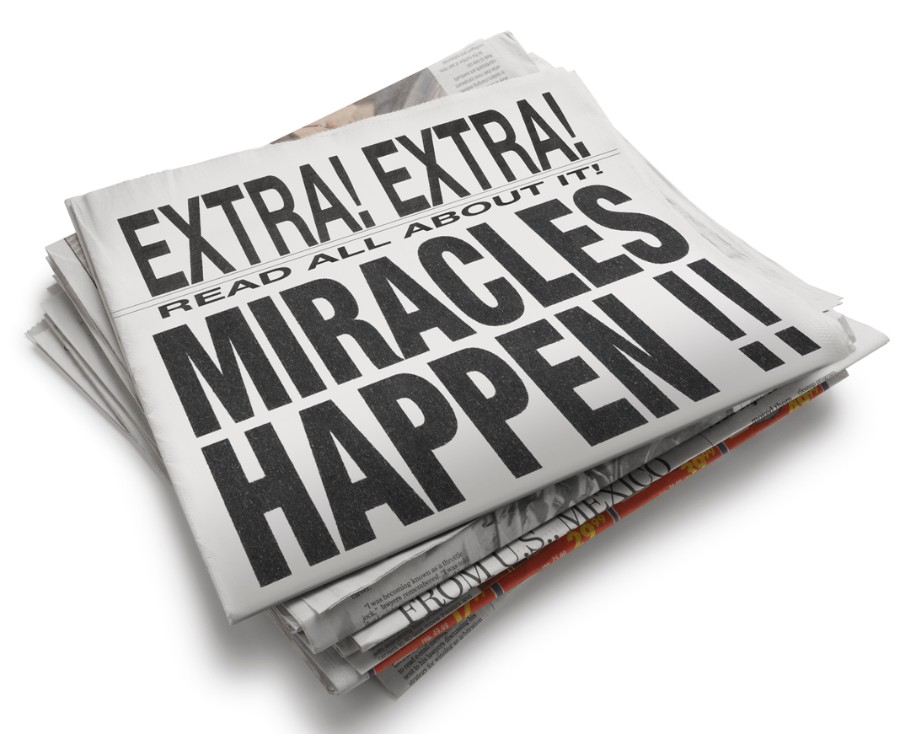 Polls done across the last two decades show that most people still believe in miracles. The number seems to be declining among younger people, though, particularly Millennials. The question of miracles isn’t new, though. Thinkers since the 17th century have criticized the idea of God’s supernatural doings in our world.

The argument hasn’t changed much since then. Miracles break natural laws, and natural laws can’t be broken. Pretty simple, isn’t it? But it doesn’t work. It may satisfy a superficial need to push God out of sight, but it contains the seed for its own defeat.

The Scottish philosopher David Hume (1711-1776) was history’s chief critic of miracles. He described them as a “violation of natural law.” The famous French skeptic Voltaire (1694-1778) referred to them similarly. “A miracle is the violation of mathematical, divine, immutable, eternal laws.” Notice he called these laws “divine.” He wasn’t really an atheist, but he did remain hostile to the idea of the supernatural.

Hume and Voltaire rule out the existence of miracles before discussion can even begin. Some thinkers today agree with them. Malcolm Diamond, former professor of philosophy at Princeton, says if we were to believe in miracles, then, “scientific development would either be stopped or made completely capricious.” In other words, science is reliable because it’s based on repeatable, natural laws. Violating those laws is a contradiction in itself.

Pulling back the curtain on their logic however reveals some serious flaws. To begin with, laws imply a “lawgiver,” a rational Mind behind their existence. Sir Fred Hoyle, the famous atheist astronomer who coined the term “Big Bang,” said, “A common sense interpretation of the facts suggests that a super intellect has monkeyed with physics, as well as with chemistry and biology, and that there are no blind forces worth speaking about in nature.” There is precision and genius behind the constructs of our world. It speaks more to an Intelligent Mind than to random nothingness.

And because our world is built on a rational, mathematical order that screams intelligence, we should not think it strange if God invites Himself into our affairs every now and then.

Those who argue against miracles based on the fact that they contradict natural laws forget where those laws originated in the first place. Denying miracles goes with believing in a “closed system” universe. The idea is that everything in our world is like a closed box. It’s self-contained running like a randomly created clock. Not even God can touch or tamper with it. We find it hard, though, to imagine a clock made by chance and being completely self-contained. Why then, should the universe be any different, with its signs of far more intricate design? Natural law is actually a great sign that the universe was designed by a super-intelligence.

Atheistic physicists have offered alternative theories to this such as the multiverse — vast numbers of universes, of which we inhabit one lucky one that can sustain life. Some follow Hawking’s idea that, because of quantum gravity the universe “will create itself.” But ideas like these lack “parsimony,” or scientific simplicity. They’re long on lofty jargon, but short on evidence. The most obvious explanation for what looks like an intelligently designed universe is Intelligence.

God Shows Up And Displays His Power

And this has much to do with the question of miracles. If God did set our world into motion, why couldn’t He have freedom to intervene when He wants to? If I built a painting easel for my kids (which I have), I might modify it for various reasons down the road.

So natural laws do not make miracles impossible. In fact, they provide the basis for any miracle claims! John Lennox, mathematician at Oxford University, says, “When a miracle takes place, it is the laws of nature that alert us to the fact that it is a miracle.”

We could never know something out of the ordinary has happened if there was no such thing as ordinary. Natural laws provide the needed stage for God to show up in our world and display His power. Humanity survives through the comfort of unchanging regularities. “Violating” those laws through miracles thus seems to be a surefire way of getting our attention. This is exactly what the Bible says God has done. “He has given proof of this (His promises) to everyone by raising (Jesus) from the dead” (Acts 17:31).

We Should Not Think it Strange

When modern day skeptics exclude the possibility of miracles, it’s like inviting a bear into their brain and letting it thrash their own logic. Hume, Voltaire and modern atheists say natural law pushes the miraculous out of sight. Actually it puts binoculars in front of our eyes. We can see further and better.

Einstein once said, “the most incomprehensible thing about our universe, is that it is comprehensible.” Our world is built on a rational, mathematical order that screams intelligence. So we should not think it strange if God invites Himself into our affairs every now and then.

“This salvation was first announced by the Lord, was confirmed to us by those who heard Him, and was affirmed by God through signs, wonders, various miracles.” (Hebrews 2:4).

Angelos Kyriakides is a freelance writer who lives in Maple Ridge, British Columbia, outside Vancouver. He has previously served as an urban missionary and youth pastor in Canada’s poorest postal code, Vancouver’s downtown Eastside, for just under a decade. His passion is to build up the Body of Christ with truthful perspectives about current events and make Christian faith real in the hearts of today’s generation. He lives with his wife, Sarah, and their two small children who always make life a joyful adventure.