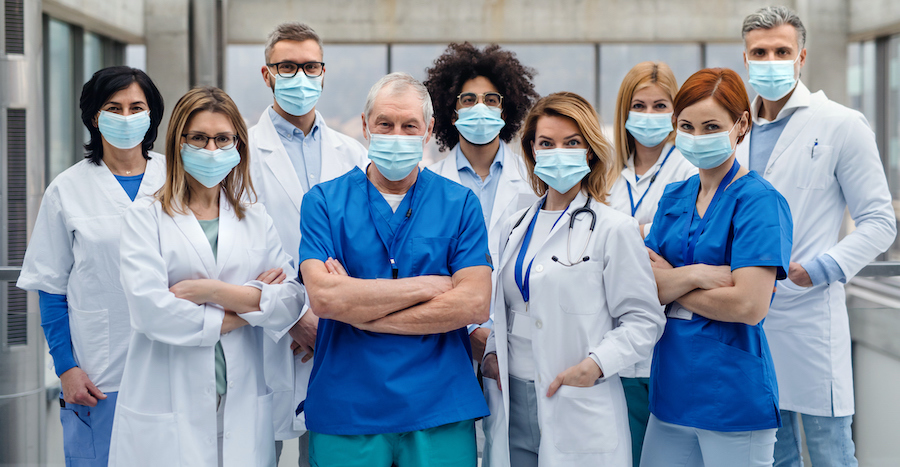 Fear of the unknown is a fact of human nature. That’s why we all admired healthcare workers in the early months of the COVID-19 pandemic. They had to face the fear of unknown risks.

A new fear has now emerged over the role of aerosols (airborne microscopic droplets) in transmitting the coronavirus. Kaiser Health News reported last week that a “battle rages inside hospitals over how COVID strikes and kills.”

Dr. Anthony Fauci added to the worry by acknowledging that officials had erred in downplaying the role of aerosols. “We [at the CDC] really have gotten it wrong over many, many years,” he conceded. The “bottom line is there’s much more aerosol [transmission] than we thought.” An uproar followed because of what this would mean for containing viruses. Hospitals have spent months implementing costly containment protocols for large droplets (in line with CDC advice). Now they’re worried that they may have to severely tighten those protocols.

Look at the Numbers

But would such a change be needed? Many health officials had assumed that the new coronavirus, SARS-CoV-2, is far more deadly than more common respiratory viruses. If so, then we should have noticed the effect of this mistaken belief about aerosol transmission. That is, we should have seen far more sickness and death among those on the front lines throughout the pandemic.

Claiming just that, The Guardian has partnered with Kaiser Health News to document all COVID-related deaths among US healthcare workers. As of October 1, they have added 1,252 names to their Lost on the Frontline database. That’s a huge loss of life. But to know if it calls for an urgent change of policy, we must compare it to the whole US population.

From the data catalogued by The Guardian and Kaiser Health on 212 of the deceased (as of October 1), 8 were under 30 years of age, 14 were in their thirties, and 95 were 60 or older. The remaining 95 were in their forties or fifties.

Let’s assume the 212 are a fair sample of the whole group of 1,252. This implies around 47 COVID deaths among US healthcare workers under age 30. Among those in their thirties, the number would be around 83, and for those 60 or over it would be about 560 (matched by that many again in their forties and fifties).

As weighty as that toll is, it’s less scary when we account for the total number of U.S. healthcare workers in each of those age brackets. According to 2019 data from the U.S. Bureau of Labor Statistics, over twenty million Americans are employed in health care (including first responders and social workers, as the Lost on the Frontline database does). About 4.2 million of these are under 30 years old, with around 4.7 million in their thirties, 8.2 million in their forties or fifties, and 3.1 million aged 60 or over.

So, it turns out that the catalogued front-line deaths aren’t out of line with the general population. Around 66 million Americans are in the 16–30 years age group. According to the CDC, that group has lost about 1,120 people from COVID-19. That makes the COVID death rate about 0.0017%.  For healthcare workers in that age group, the 47 deaths among 4.2 million workers gives a death rate of 0.0011%. That’s below the national average.

Dr. Fauci is almost certainly right that aerosols transmit the new coronavirus. But like many public-health officials, he’s oversold the dangers to health care workers and the general public.

The picture is similar for all age groups. Of 83 million Americans in their forties or fifties, just under 25 thousand have died with COVID-19, making the death rate in that group about 0.03%. For healthcare workers in that group, the 560 deaths amount to 0.007%, when divided by 8.2 million workers. The roughly 33 thousand deaths attributed to COVID-19 among Americans in their sixties is about 0.09% of the 36 million in that group. For healthcare workers, the recorded deaths in that age group come in well below that, at 0.02%.

Dr. Fauci is almost certainly right that aerosols are a major source of transmission of the new coronavirus. But like many public-health officials, he’s oversold the dangers.

Douglas Axe, William Briggs, and Jay W. Richards, and are the authors of The Price of Panic: How the Tyranny of Experts Turned a Pandemic into a Catastrophe.

Sorry LA Times: The COVID Lockdowns Were Not Painless and Effective