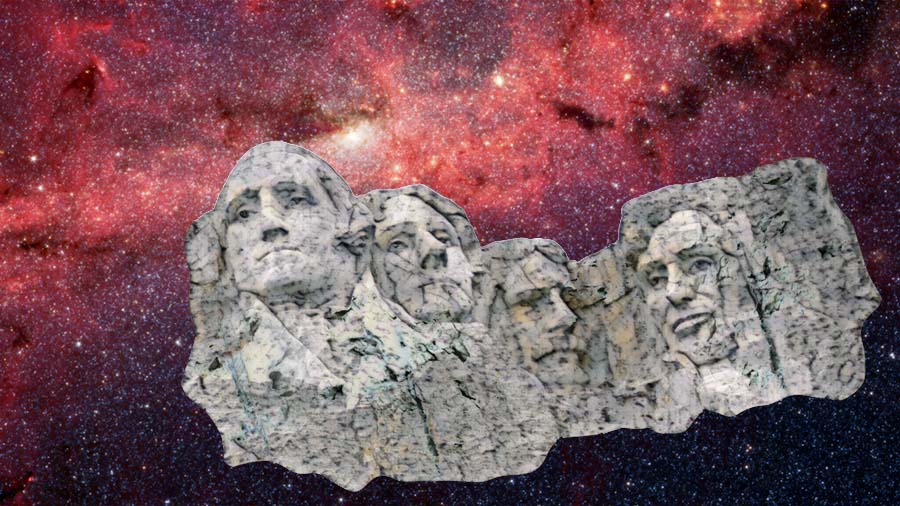 Washington, D.C., January 7, 2022, AP: NASA scientists who monitor the observations of the Hubble Space Telescope currently floating above the earth have given more details about Space Object X-79393-b. It was identified traveling through the Solar System at the remarkably slow speed of 55 mph in late November 2021. “It just seemed to appear out of nowhere,” said astrophysicist Scott Huber, associate director at NASA. “We had not observed it before. You’d almost think it had materialized out of nothing, a few million miles from Saturn.”

Object X-79393-b is on a trajectory to pass near by the earth at a distance of only half a million miles — a “near-miss,” scientists are calling it  — before traveling ultimately into a close orbit of our sun. Scientists admit to being mystified by the Object, whose form and composition have come under intense study worldwide. In a press conference today at NASA’s D.C. office, Huber reported the preliminary findings. “Increasingly vivid imagery from the Hubble Telescope and various earth observatories have confirmed the unusual, striking shape of Object X-79393-b,” he told reporters.

The Object’s Puzzling Shape and Composition

Projecting an image of the Object for assembled journalists, Huber explained: “I know what you’re thinking, and the answer is yes. The Object looks remarkably like … Mount Rushmore in South Dakota. And no, we don’t know why.” Before taking questions, Huber continued:

“And the Object’s composition has been determined via spectroscopic analysis, with a 98% certitude, thanks to the fine work of Professor Zhao at Beijing University. We can confirm that the Object’s make-up is Protein, 31.23%, Lipids, 34.39%, Water, 30.17%, and Mineral ions, 4.31%.” Huber went on to explain, “That’s cheese, people. The object is made of cheese. And to anticipate your questions, gorgonzola cheese, to be exact.”

Getting Help from Richard Dawkins

Rather than field reporters’ inquiries about the object himself, Huber took the unusual step of yielding to another speaker, prominent biologist and evolutionary theorist Richard Dawkins. The former Oxford University “Professor for the Public Understanding of Science” read from a prepared statement.

“There are many who will attempt to misinterpret, misrepresent, even hijack the news of this exciting discovery for anti-scientific ends. Some religious dogmatists, science fiction aficionados, and conspiracy theorists will claim that Object X-79393-b is proof of extra-terrestrial life, even advanced life. They will point to the appearance of so-called ‘intelligent design’ in the object, specifically in its resemblance to four former United States presidents, as carved on a mountain in South Dakota. They will further cite the presence of organic compounds previously observed only in food products intentionally produced for human consumption. Or cheese, if you will.”

How Did This Object Evolve?

Dawkins wiped sweat from his forehead and continued.

“Yes, there will be the inevitable chorus of pseudo-scientists, enthusiasts, mystics and fanatics. They will claim that it is impossible for nature to have crafted a precise, scale replica of earth’s Mount Rushmore in space, out of gorgonzola cheese, and sent it hurtling into our solar system. I will admit that it is unlikely. But every single event that occurs in each of our lives is enormously unlikely.

“The self-organization of biological life on earth from the dead chemicals of the primordial soup was enormously unlikely. Even biological scientists are tempted — but only in terribly careless moments, mind you — to call the origin of life a ‘miracle.’ It can only be true metaphorically, as we all know. Granted, the fact that the universe itself has the physical laws that it does, which permitted life to develop on earth, is infinitesimally unlikely. Just ask any physicist or cosmologist. We are in the business of trying to explain and make rational sense of one unlikely event after another.”

“And we shall remain resolute, true to our scientific principles, relentlessly searching out explanations within the parameters of rational methodology. Supernatural explanations are the refuge of the weak-minded. We take the courageous path, the path of reason. We reject all fairy tales, myths, superstitions and imaginary entities, including ‘God,’ ‘Allah,’ and even in this case, ‘Cheese-making pro-American space aliens.’ Indeed, reason itself compels us to conclude that this object was the result of random variation and natural selection. Especially natural selection, which has great, great powers of design, err, … creation … err [pardon me while I find my place in my notes again!] causing things to happen that look designed.”

When he did submit to questions, Dawkins was curt, even sharp, when the first reporter asked why Object X-79393-b appeared so intentionally designed. “Who let the Creationists in the room?” Dawkins mocked, before moving on to another reporter. After several more such questions, Dawkins grew impatient, chiding the gathered press pool:

“Charles Darwin himself, if I might appeal to an authority, admitted that nature is rife with the ‘appearance’ of Design. The human eye, the wing of a bird, the bizarre feeding behavior of the Venus Fly Trap. In past ages our ignorant forebears attributed all this to some all-wise, all-powerful bearded gentleman who floated on a cloud. We know better. The reason we know better is because we’ve rejected such ancestral fairy-tales, and hunkered down to do the science! And we will do the science again today.”

“We will send probes to sample Object X-79393-b. We will harry it with cameras. We will work in our labs to replicate conditions under which, by purely random and natural processes, it might have been produced. What we will not do is compromise our scientific integrity by entertaining fanciful, anthropomorphic, or medieval theories as to its origin.”

“Somehow, over the course of billions of years, in the vast recesses of space, in this one universe out of the countless, infinite universes which surely exist, Object X-79393-b came to be. We may never know what combination of solar winds, radiation, gravity, and other forces — including natural selection! — evolved it into the shape of Mt. Rushmore. Yet we will never cease our investigations, so long as they’re properly funded. Thank you.”

With that he signaled to technicians to cut the lights in the room.

How Does a Watch Evolve?

You might laugh at my hypothetical story here, but Dawkins’ response to Space Rushmore would fit the response of Darwinian materialists to arguments for Intelligent Design. ID scholars like Stephen Meyer, William Dembski, Michael Behe others have explained that there’s really nothing so mystical about their views. When we see objects that contain information, and specified complexity that serves an obvious purpose, we naturally conclude that they were designed.

Nobody looks at a watch and wonders how it evolved. No one picks up a book and wonders what laws of physics arranged its letters. Nor would we conclude that a Mt. Rushmore in space made of cheese was just an artifact of physics and chemistry. In such cases, we naturally conclude that conscious design played a part.

But since Darwin’s day, biologists have insisted that we do just that when we see the much more elaborate, intricate, exquisitely purposive machinery in nature. We must attribute irreducibly complex mechanisms, and extraordinarily complex processes, to utterly random chance. Or unknown laws of nature. We must assume that given enough time, the silicon at a beach very well might evolve into a functioning computer.

In the decades since Darwin wrote, we’ve learned that random mutation doesn’t produce the kinds of large-scale useful mutations Darwin cited. The fossil record doesn’t contain the countless transitional forms he predicted, on which he admitted his theory stood or fell. Chemicals don’t combine on their own into chromosomes and compile the information needed to specify the functional parts of an organism. None of it works.

If Space Rushmore appeared, even scientific materialists would (probably) see design behind it. Life in its nano-details is no less amazing. If they were consistent they’d apply the same principles to life as they would to Object X-79393-b, but they don’t. The whole materialist worldview rests on a willful refusal to face facts and reason honestly. Some truths are apparently too brutal to face.