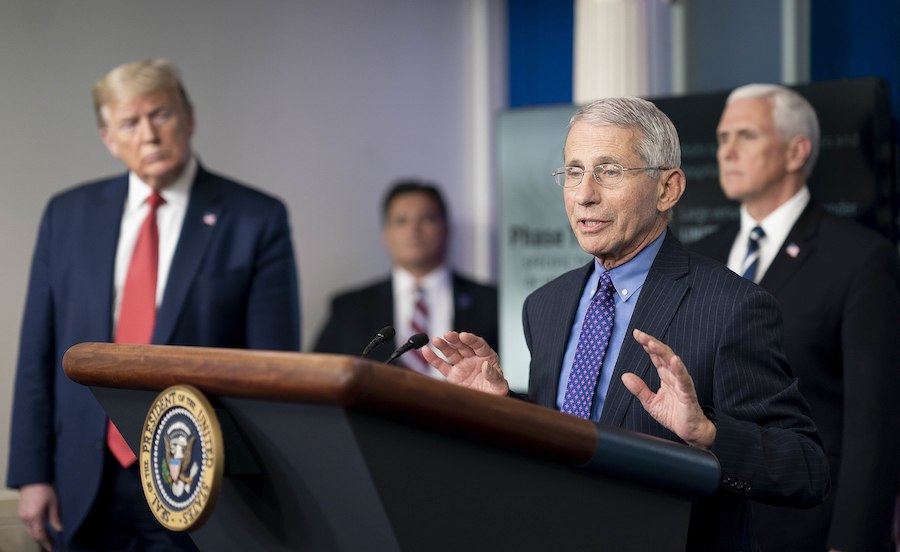 Wanna know what caused the wave of the past decade’s “unprecedented pandemic explosions,” of which COVID-19 is one?

Yes. Or so says our very own Anthony “Never Shake Hands Again” Fauci, a fellow you might have seen on television striking various poses.

This is his (and David Morens’) scientific idea, stated scientifically in a new scientific paper, that the science says that truck stop prostitution, road-building, and disharmony with nature is causing “unprecedented pandemic explosions.”

Now this disharmony with Mother Ear … What’s that? You haven’t heard of these “unprecedented pandemic explosions”? Well, they’re diseases like the coronadoom. But before we get to our sins against Mother Earth, we need to understand what Fauci means by “unprecedented.”

Fauci’s contention is that pandemics are on the upswing, which means that, given the intense insane hyper-over-reaction to coronadoom, we could soon be in some deep kimchi.

Haven’t I Met You Somewhere Before?

Is it true communicable diseases are increasing?

Fauci has a chart listing sixteen past pandemics throughout human history, half of which were since 1918. The implication is that these were the only ones worth noting, and that mass deadly outbreaks are becoming more frequent.

This is not so.

Wikipedia has a different list with over 250 outbreaks going all the way back to 1200 BC. The most notable of which was the Black Death, which between 1346 and 1353 slaughtered 75 to 200 million-with-an-m people. Fauci lowballed his memory of this horror, saying it was only 50 million. Maybe because he wanted to claim an event closer to our time — 1918’s Spanish Flu — was “the deadliest event in recorded human history.”

My sons and I used to play “Slug Bug.” When you were the first to spot an old Volkswagen Beetle, you got to whack somebody saying the color. “Slug Bug green!” Chances are you can’t recall the last time you saw one of these cars on the road. But go out now and look for one — actively search. You’ll be surprised at how many “suddenly” appear.

Your surprise is due to measurement bias. The same is true with disease bugs. If you never looked for them, you never saw them. It’s only in the last few decades that we’ve taken active measurements of the various infectious agents we live with. These searches make it seem, to the naive, that mass-casualty outbreaks are increasing.

Yet it just isn’t so. Scan that Wikipedia list. In 735, Japan saw an outbreak of smallpox that killed 2 million. The Antonine Plague of 165 sunk 5-10 million into early graves. On and on the bell has rung.

We come now to COVID-19, the coronadoom. It cannot be considered unusual. It will not even join the Disease Hall Of Fame. Asian flu in 1957, which beat COVID-19, killed 1 to 4 million, and the same with 1968’s Hong Kong flu. (Fauci includes neither of these.)

Flu and its complications (like pneumonia) regularly and routinely kills hundreds of thousands to millions worldwide. Each and every year. Even in the presence of vaccines. This has been so throughout history, and there is no reason to suppose it will change in the future.

One thing that has changed has been our perception of disease. We have grown exponentially more fearful, and we now must have somebody to blame.

Build one too many truck stops and you “provoke” Mother Nature into an extreme backlash. Like the coronadoom — and the “deadly barrage” of other diseases they found but which didn’t turn out to be so deadly.

Only way out of this, says Fauci, is to placate our great goddess. We need to live “in more thoughtful and creative harmony with nature.” Funny he doesn’t say how we achieve this state of harmoniousness. Except that we need to “begin to think in earnest and collectively.”

No End In Sight

My earnest thought, which I’ll add to the collective, is that we must never, ever again panic over not-at-all unusual wholly expected common disease outbreaks. Panic kills. It makes us stupid. It causes us to react in ways that do more harm than good.

Panic has so benumbed governments that many have taken a zero-tolerance policy on coronadoom. Things will never be the same again, they promise us, until the virus is eradicated! Yet even according to fabulous Fauci himself, this is nuts.

“That viral genetic descendants of the 1918 influenza pandemic virus are still causing seasonal outbreaks throughout the world, and still killing cumulatively millions of people a century late,” he tells us.

This is true! The coronavirus associated with COVID-19 will also, in one form or another, be with us from now on. If we are going to lockdown and restrict liberties until it “goes away,” we shall do so forever. Fauci’s latest conjecture about truck stop prostitutes and Mother Earth is just another distraction. But it does it gives us even more evidence that the pandemic panic that still shrouds the earth is not mainly about science or public health.

William M. Briggs is a senior contributor to The Stream, author of Uncertainty, blogger at wmbriggs.com, philosopher and itinerant scientist. He earned his Ph.D. from Cornell University in statistics. He’s the co-author, with Douglas Axe and Jay W. Richards, of The Price of Panic: How the Tyranny of Experts Turned a Pandemic Into a Catastrophe (October 2020).