Today we are all part of the Bills Mafia. 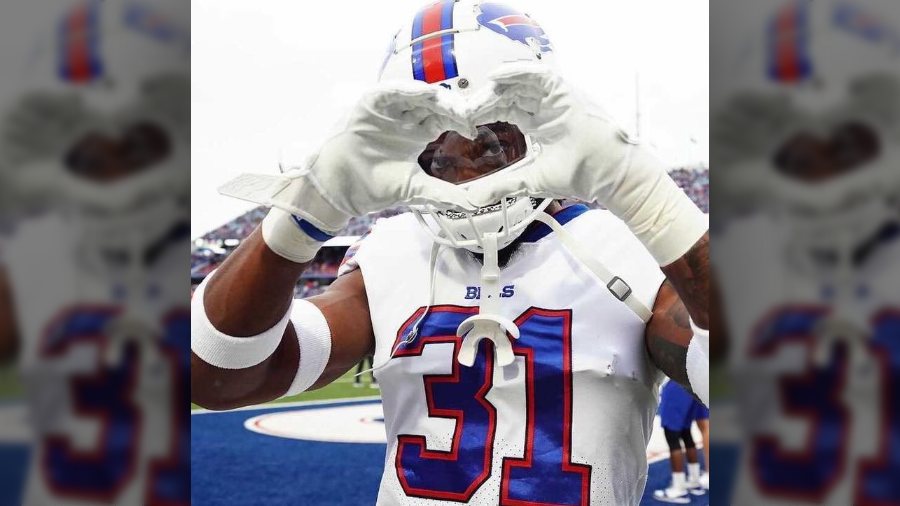 Damar Hamlin of the Buffalo Bills

Update: The family of Buffalo Bills safety Damar Hamlin has released a statement thanking the public for its “love and support show Damar during this challenging time. We are deeply moved by the prayers, kind words, and donations from fans around the country.”

They also thanked the first responders, Cincinnati Medical Center, the Bills organization, and offered a special thanks to “Coach (Zac) Taylor and the Bengals for everything they’ve done.”

The statement ends: “Please keep Damar in your prayers.”

A statement from the family of #Bills S Damar Hamlin, via @jordonr: pic.twitter.com/VolSLMraUN

Monday Night Football turned into a late night prayer vigil as the nation prayed for Buffalo Bills safety Damar Hamlin. In a scene as terrifying as anything the NFL has ever seen, the 24-year-old suffered cardiac arrest after a hit, collapsing backwards onto the field. As tear-soaked teammates and opposing players on the Cincinnati Bengals circled and sought comfort in each other, nearly a dozen EMTs, team trainers and doctors performed CPR, racing to get his heart restarted.

An ambulance whisked him away without viewers knowing if young Hamlin was dead or alive.

Buffalo players circled together in prayer, fans gathered at the hospital for a prayer vigil.

The thoughts and prayers of all of Bills Mafia are supporting you, Damar. 🙏 pic.twitter.com/lDWNAOEPX4

The game would eventually be postponed. How could it not?

“Please pray for our brother,” star quarterback Josh Allen tweeted near midnight. He need not have worried. The nation was, indeed, praying. Last night and this morning, all fans are part of the Bills Mafia.

Hamlin Has Made It Through the Night

Sunrise brings a measure of hope. The Bills released a statement confirming that Hamlin did suffer cardiac arrest, but that “His heartbeat was restored on the field and he was transferred to the UC Medical Center for further testing and treatment. He is currently sedated and listed in critical condition.”

Damar Hamlin suffered a cardiac arrest following a hit in our game versus the Bengals. His heartbeat was restored on the field and he was transferred to the UC Medical Center for further testing and treatment. He is currently sedated and listed in critical condition.

He is alive. Praise God. We await further updates on Hamlin’s condition.

It Didn’t Seem That Unusual a Hit

Naturally, with the dramatic spike in soccer players and other young athletes collapsing and dying during games with heart issues since the COVID vaccines came along, the first instinct is to blame the jab.

It’s way too soon to go there. Cardiac arrest results from electrical disturbances that cause the heart to suddenly stop beating properly. Medical experts are suggesting we could be looking at a freak accident, the force of the tackle hitting at just the wrong spot.

According to the American Heart Association, “Cardiac arrest may be reversed if CPR is performed and a defibrillator shocks the heart and restores a normal heart rhythm within a few minutes.” Thankfully, trainers got to Hamlin within 10 seconds, though it is not known how long before his heart was beating again.

However, we cannot totally let go of the possibility this incident was related to the jab.

Higgins tweeted a prayer for his competition.

My prayers and thoughts go out to @HamlinIsland the Hamlin Family. I’m praying that you pull through bro. Love 🙏🏾💙

The Buffalo News reports the Bengals wide receiver left the stadium with his arm around his mother. You can imagine.

Who is Damar Hamlin?

Hamlin’s mother was at the game as well, and reportedly accompanied her son in the ambulance. Hamlin had it hard growing up in McKees Rocks, Pennsylvania, near Pittsburgh. A father in prison for dealing drugs, several friends murdered. But he made it to the University of Pittsburgh. In 2021, Hamlin was drafted in the sixth-round by the Bills. His rookie season was spent mostly on special teams, but this season Hamlin’s played in all 16 games, registering 63 solo tackles and 1.5 sacks.

Over and over, you heard commentators and former players saying “I’ve never seen anything like it.” It’s true, to a great extent. This was unlike other injuries. Even serious ones where a player has suffered a traumatic injury or frightening injury. Think of Dolphins quarterback Tua Tagovailoa suffering a seizure after his concussion earlier this year. But this was life and death. Live on television. Live on Monday Night Football.

Yet those of us old enough to remember, have seen something like it on Monday Night Football. December 8, 1980, when legendary MNF host Howard Cosell interrupted the game to announce that Beatle John Lennon had been shot in New York City. While the game continued, the game disappeared. This was life and death. Soon after, Cosell delivered the terrible news: John Lennon was dead.

Today we awake to the news that Damar Hamlin did not die. He is alive. His heartbeat was restored. Our collective prayers that his life be spared have been answered, at least at this hour. We do not know the damage. We do not know the prognosis. But we do know things look a lot better than they did at 9 p.m. last night.

For that we can be thankful.

As we continue to pray for Hamlin, we can be thankful for something else. Last night, for several hours, the rancor was gone, the divisions were forgotten. Even the sniping on Twitter seemed to hush. America was united in prayer.

Despite the horror of the situation, didn’t that feel better, America?

Sports Gambling Is a Bad Bet