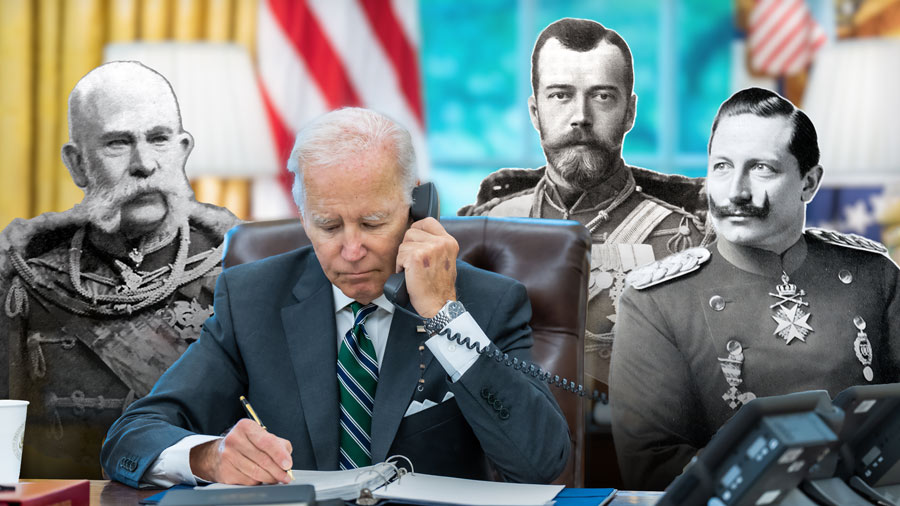 We would like to greet you from the Beyond. It is not permitted to us to share specific details of our fates in the Afterlife. Some Catholics may be granted such apparitions, but they are typically a good deal more devout than you. Instead, consider that the three of us address you from the “ash heap of history.” We share some common ground with you, faced similar temptations, and have come to bring you a warning. Think of us, perhaps, as the Ghosts of Empires Past.

Each of us began our reigns as leaders of powerful, prosperous realms — like you. One of us (Franzi here) endured on the throne until his mind was almost as foggy as yours is now. Another of us (Willi says “Hallo!”) was considered half unfit to rule, and bullied by his advisors. And the other (Nikki waves) was possessed by a messianic belief that his empire was called to liberate Eastern Europe.

So you might say we “know where you’re coming from.” And we see where you are headed. In your steady, willful escalation of conflict with Mr. Putin’s Russia, you are walking down a path that each of us trod. We know where it leads. And we beg you to turn aside.

The Allure of Flags on a Map

When you’re ruler of an empire, as we were and you are, it’s dreadfully tempting to only see half the picture. You look over the maps that show your mighty fortresses and armies. You see those thousands of miles covered by your territory, and think that they must be expanded. That your realm would only be safer if it swallowed up this enclave, liquidated that enemy, or forced its influence into yet another borderland.

You consider the glory that would attach itself to your name, if you were the victor, the conqueror, the liberator of this place or that one. You imagine your nation’s system marching gloriously forward, offering Peace and Progress to citizens now “enslaved” (as you’ll say) by your rivals.

The men around you flatter you, especially those in uniform. It’s their job to keep your empire strong, so of course when you ask them, “Is it? Are we strong enough to win this conflict, or that one?” They answer, “Yes, Majesty. Of course. Our enemies are weaklings, cowards, mercenaries — or miserable conscripts eager to desert the Enemy’s colors at the first opportunity!”

Because if they answered you otherwise (“No, Majesty, we are weak.”) you’d be likely to fire them. For not doing their job!

The “Traitors” Were the Genuine Patriots, It Turned Out

It’s much more pleasant to listen to men like these saying things like that than to hearken to your critics. To the pessimists. To the advocates of appeasement, who seek negotiated solutions — which never end in triumphant processions of your soldiers through foreign capitals, or ticker tape parades. The best they have to offer you is half a loaf, forked over grudgingly after tedious diplomatic back-and-forth, back-and-forth. No ruler ever commissioned a portrait of himself signing a compromise with bitter rivals. No, you wish to be remembered riding a white charger through their rubble.

But rubble falls both ways, Mr. President. As we learned to our terrible cost. In 1914, each of our governments scoffed self-righteously at making concessions that might harm our “prestige,” or “reward” our opponents for acting wickedly. We might have even berated, or labeled as “traitors,” those prudent souls who begged us to back away from the brink. We couldn’t imagine a future where our wealthy, powerful nations didn’t keep on expanding our influence, at the cost of our neighbors and rivals. That would be unthinkable, unconscionable, disgraceful.

Once our underlings unleashed the massive chaos of war among the Great Powers, the conflict spun out of control. We actually lost the power to make a rational peace, as bloodlust among our peoples demanded “total victory,” lest anything less “disgrace the memories” of the soldiers we’d already sacrificed. So in order to “honor” them, we sacrificed countless more, throwing good dead after bad, and destroying Christian civilization in Europe forever.

You have the power to do far worse. Instead of poison gas hanging over battlefields for a few hours, your actions could leave radioactive fallout poisoning dozens of cities for millions of years. Consider it Progress.

By the war’s end, of course, any one of us would have begged for some scrap of the honorable compromises we’d once held in contempt. Could we keep half our kingdom, perhaps? Abdicate in favor of a relative? At least find a comfortable exile, rather than get slaughtered in a basement along with our family by psychopaths? Instead, our nations were hijacked and fought over by the lowest kinds of maniacs, using the force of the State to shove down the throats of millions opinions once held by contemptible cranks.

You Can’t Herd a Plague of Locusts

The point is that war isn’t like a stallion or a lion. It’s more like a cloud of locusts that comes to devour any and all. Unleash it, and it flies quite beyond anyone’s control, devastating everything. You can never predict the outcome, or you wouldn’t start it in the first place. And even if you win, you leave behind millions of mourners, shattered cities, stunted futures and starving citizens.

And all of that is on your conscience, come Judgment Day.

Mr. President, your nation is every bit as brittle and fragile as our empires were in 1914, and you are as blind to that fact as we were. You seem to be sleepwalking toward a devastating conflict, lulled by the flattery of armchair generals and home front conquerors. If you wish to leave some legacy, let it be that you were humble enough to know your country’s limits, and live within them — not hurl it against the rocks until its prosperity and power smashed into pieces.