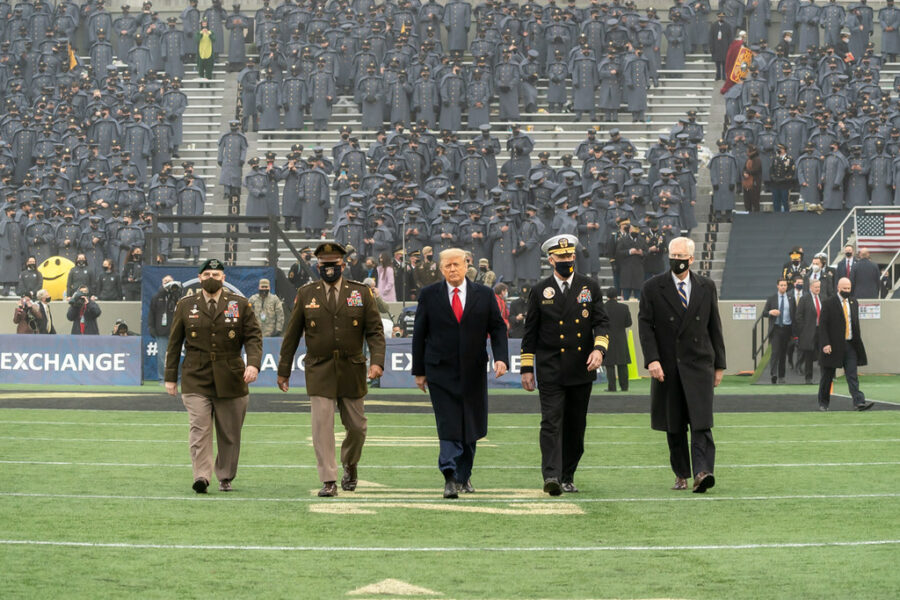 Ready for a second cup of Brew?

More’s been going on besides the war for Ukraine. Let’s catch up on some of it.

Donald Trump did not officially toss his hat in the ring. But on Saturday night, Trump stretched his arm and picked up his hat, and said, “Head’s up.”

Trump won the CPAC presidential nomination straw poll Sunday, pulling in 59%, up from 55% last year. Second place went to Florida Governor Ron DeSantis at 28%. However, if Trump chooses not to run, DeSantis jumps up to 61%.

No wonder Biden’s been hiding this weekend in Delaware. Poll numbers as low as his would send most anybody cowering into a corner. A new poll from NPR/PBS/Marist puts Biden’s approval at a record low of 37%. Disapproval is at 55%.

He’s even lost support among his dead voters.

More troubling numbers (from his point of view): 67% of independents think his presidency is a failure. That’s two-thirds of folks in the middle thinking his term is a bust, and we’ve only played the first quarter.

54% do not think he has the “mental sharpness it takes to be president.”

Biden is scheduled to deliver his State of the Union address Tuesday night.

Just a suggestion, but perhaps their polling numbers would go up if the Administration didn’t keep doing silly, woke things. Another example: China’s got a massive espionage program operating against the United States. So what’s Biden’s DOJ do? Terminate a program specifically targeting Chinese espionage. Why? Because of allegations of racism.

It was called the China Initiative. It’s being trashed by the DOJ, according to Politico, because of “perceptions that it unfairly painted Chinese Americans and U.S. residents of Chinese origin as disloyal.”

“By grouping cases under the China Initiative rubric, we helped give rise to a harmful perception that the department applies a lower standard to investigate and prosecute criminal conduct related to that country or that we in some way view people with racial, ethnic or familial ties to China differently,” said Matthew Olsen, Assistant Attorney General for — note this — National Security.

Not so, says former acting Attorney General Matt Whitaker. Whitaker told EpochTV while at CPAC, “It is targeted specifically at the Chinese Communist Party [CCP] that has been destabilizing our country.”

How strange for the Biden DOJ to accuse anybody of stereotyping. They had no problem declaring all parents upset at their school boards as potential domestic terrorists. The same administration declares that everyone who believes the 2020 election was rigged … about half the country … are the #1 domestic terror threat.

So stereotyping Trump voters, fine. Trying to uncover China’s spy network in the U.S., not fine.

It gets even better. On Thursday, Rep. Eric Swalwell called on the U.S. government to kick all Russian students out of American universities. Yes, the same Eric Swalwell who couldn’t kick a Chinese spy out of his bed.

How surprising is this?

Senate Republicans have been investigating Biden, Inc. Of particular interest, how Hunter Biden traveled the world when Joe was VP scoring multi-million dollar paydays from countries Joe was engaged with. Senators Ron Johnson and Charles Grassley want to see Secret Service records of Hunter’s travels during those years, to know specifically where he was. Hunter was under Secret Service protection.

The Secret Service did turn over some heavily redacted documents. Johnson and Grassley demanded know why the record is so skimpy and redacted. Amazingly, the Secret Service came back claiming they have no records for 2010, 2011 and 2013.

CNN has reportedly picked its new president: Chris Licht. Licht is currently the Executive Producer of The Late Show with Stephen Colbert. So, CNN thinks it’s going to beat Fox News by hiring a guy whose current show gets beat in late night by Fox News.

We Can Pray and We Can Help

In case you missed it earlier, our parent organize LIFE Outreach, International has put out a call for prayer and an opportunity to help the people of Ukraine. Said James Robison:

We must pray for the people of Ukraine in their hour of need – families are fleeing because of the danger, and their hearts are filled with fear. Pray for our Ukrainian brothers and sisters in Christ.

Also pray for the Ukraine LIFE Center that has been such a blessing to children in need. Pray for the mission workers who will do all they can to keep the children safe.

PLEASE PRAY and give to help with relief efforts for the thousands caught in harms way. We as Christians must run to those in need and give comfort and aid. May God take this evil and use it for His glory.