America’s History: A Tuttle Twins Series of Stories for Families is a Different Way to Look at the Past

From the Author of Tuttle Twins, 'America's History' explains what actually happened in America's past, what students can learn from it and why they should care. 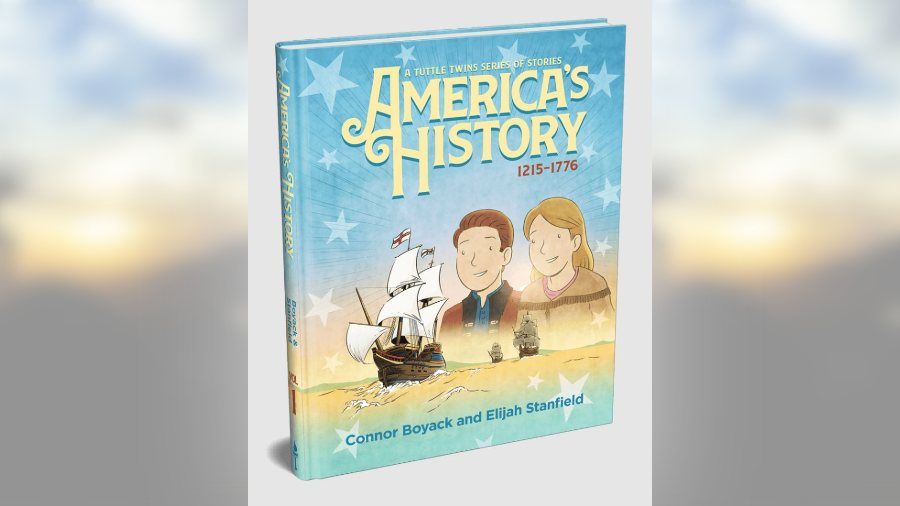 Public and secular schools have a problem. It isn’t just the schools teaching Critical Race Theory and the 1619 Project in a history class. It’s teaching students how to learn about the past rather than learn from the past. Author Connor Boyack, along with illustrator Elijah Stanfield, has created an answer to the concerns of parents with the new book, America’s History: A Tuttle Twins Series of Stories. The 240-page book, which was released July 4, 2022, is the first in what likely will be a four-part series.

Teaching Kids About the Past

More than two-and-a-half years ago, Connor purchased over a dozen social studies books that are being used in classrooms nationwide. “My theory at the time … was that we are doing an awful job at teaching kids to learn from the past. We teach them about the past. ‘Things happened on these dates. These people said these things. These people fought.’ We teach them about the past. We do a horrible job … teaching kids to actually learn from the past, draw conclusions and perspectives that can inform their lives today.”

After studying the social studies books, Connor discovered that none of the books helped kids understand what history means for them now. “Not one of the books even attempted to help kids understand how to draw lessons and ideas and values from historical events to make them better kids and people and make a better world today.” That is what led Connor to write America’s History as part of the Tuttle Twins brand.

Connor pointed out that many of the people pushing the 1619 Project are very progressive, very Marxist people trying to divide our society. He cited the statues of the founding fathers being torn down. “I think it is an attack on the ideas they stood for, the good ideas they stood for. … But I think that the efforts of those pushing 1619 Project, critical race theory, tearing down statues and more is that by discrediting these individuals, these founding fathers, they can more easily dispense with the classical liberal freedom ideas that they were advocating.”

This is both strategic and intentional. “There are people out there trying to, like a marionette, move these puppets around and get them doing these things, because their ultimate goal is to undermine these values of freedom that the founding fathers fought for.” Connor doesn’t believe that America’s story is rooted in slavery. “I think America’s story is rooted in … free trade, because at the silk road, you have this bustling trade. That is what prompted exploration. … So, America’s true story has its roots not in slavery, but in the betterment of, of our lives through trade and cooperation, which led centuries later to this new country.” He continued:

The problem with the 1619 project and critical race, all these people, they want us to look at our past to make us feel bad about ourselves. That I’m a white person. How dare I, I’m part of the problem. I’m privileged. All these things — it’s meant to tear us down and divide us. I think we need to frame the past in a productive way that empowers us to, you know, create a better, more inclusive and fair world. And so that’s kind of what we’re after is trying to make sure we’re teaching history in a positive way that helps us make our lives better today.

It’s a war that is fought every day in schools nationwide. “If parents don’t realize that their children are ground zero for an ideological battle in our modern society, then they will lose. If they don’t provide a shield and a sword to their kids before they send them into school, they’re sending their kids into an environment where they will be very negatively affected.” Parents who can’t homeschool or correct the problems their kids picked up from school can use America’s History to help correct course.

“What we’re trying to do with Tuttle Twins is solve for that exact problem,” because many parents were not taught free market principles and sound history when they were young. And they trust teachers to do it for them. Connor wants parents to know that these books are not children’s books. “They are family books. … Many parents are telling us they are learning a lot of these things for the first time that they never learned in school, simply by reading together with their kids. … So here we say, ‘Here’s these story books, just read these fun stories. Oh, and by the way, you’re going to learn these really important things.'”

To learn more, go to TuttleTwinscom/history.