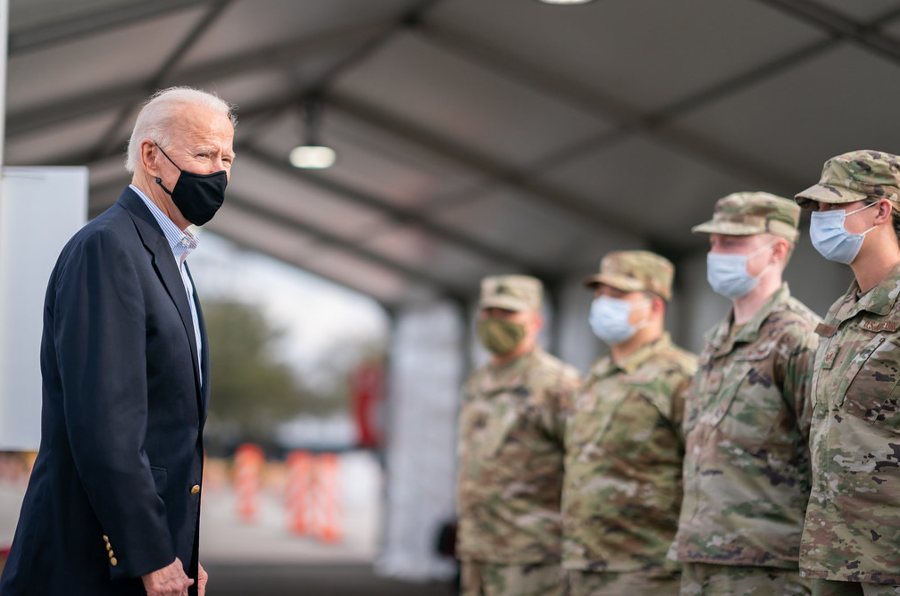 Nature abhors a vacuum. So does the international stage. And with Joe Biden showing all the toughness of tissue paper, our rivals and enemies are on the move to take advantage.

Russia on the Ukraine Border and Our Own Doorstep

Russia has moved heavy artillery and tanks towards the Ukraine border, raising fears of an imminent offensive action. 4,000 heavily armed troops are on the move in Crimea, a US defense official told CNN. Russia insists it’s just a “training exercise.”

Well, how about Russia toying with Alaska? Russia is now spending “hours” in airspace near Alaska, the head of the North American Aerospace Defense Command said last week. Air Force General Glen VanHerck says Russia’s been expanding its activities in the Arctic region. “Clearly,” he said, “Russia is trying to reassert on a global stage their influence and capabilities.”

“Just days ago,” says Alaska Gov. Mike Dunleavey, “Russia broke the Arctic ice with three nuclear submarines, while Russian LNG tankers made a winder journey along our coastline for the first time earlier this year.”

The Bear is pawing at our back door.

China on the Move

China’s also upping its activity in the Arctic. In an op ed for Daily Caller News Foundation, Gov. Dunleavey warned of the combined Russia and China threat to his state and region. China, he said, is “preparing to lay claim to what it calls the ‘Polar Silk Road.’” That is, creating shipping routes and mining lucrative mineral resources across the Arctic. (And for that matter, the Antarctic.) The details of their five-year plan were released in early March.

Meanwhile, in the warmer waters of the Pacific, China has upped its incursions into Taiwanese air space, and has a carrier group doing exercises near Taiwan. Those exercises will become regular, China has declared. As Newsweek reports, this comes weeks after China’s Xi Jinping threatened Taiwan with the “punishment of history” if it keeps resisting being absorbed by the Chinese Communist Party,

It seems all that now stands between China and the regime’s desire to drag Taiwan under its direct control is the strength of America’s hand, which Beijing may soon force Washington to show. Taiwan and U.S. allies in Asia hope America isn’t bluffing.

What strength? Remember, just a couple weeks ago, Chinese diplomats verbally smacked around the American delegation, humiliating them at their first meeting. Just yesterday, Biden revealed he did not even discuss the origins of the Wuhan Virus with Xi during their two hour phone call.

Whatever strong hand the American military has, it’s neutralized by the shaky hands of the Commander-in-Chief.

Even if America doesn’t want to bluff, what can the U.S. military do when China is holding the Biden card? Communist China pumped a billion dollars into Hunter Biden’s hedge fund and made assorted other business deals with the Biden Family. They didn’t do it for Joe and Hunter’s financial acumen.

Meanwhile, the US has begun “indirect” talks with Iran in an effort to revive the 2015 nuclear deal that former President Trump pulled out of.

Iran is taking a hard line. “Lifting U.S. sanctions is the first and most necessary action for reviving the deal,” says Iran’s chief negotiator Abbas Araghchi. Except, of course, if you eliminate sanctions and the financial pressure on Iran, what motivation do they have to give up anything?

As former Secretary of State Mike Pompeo put it last month, Iran knows “how to drive a truck through American weakness.”

Iran, China and Russia Teaming Together

So China, Russia and Iran are ratcheting up world tensions. Right as they have, to quote Newsweek, “set out to build on their strategic partnerships as they pool efforts to counter what they see as an increasingly aggressive United States attempting to thwart their efforts.”

Our dangerous rivals have also been conducting joint military exercises at sea in recent months.

… while the U.S. military has been teaching soldiers how to be woke, attacking Tucker Carlson, seeking funds to pay for transgender surgeries, and hunting “domestic extremists” in its ranks.