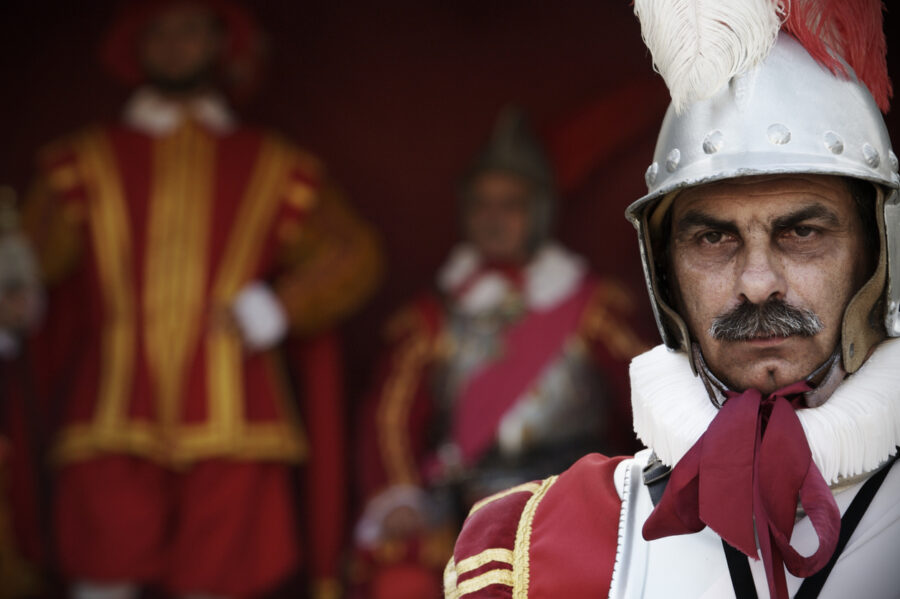 An expansive, robust religious liberty has largely prevailed for centuries in the English-speaking world — compared to the grim alteration in the Latin world of religious monopoly and violent anti-Christian revolution (see France, Spain, Mexico). This doesn’t mean that religion and violence have always been neatly separate. Wars of Religion tore France apart in the 16th century, but in the 17th, it was England’s turn.

The conflict in England was only partly driven by potent religious differences. There was much more at stake in the battles between Parliament and the Stuart monarchy, and the outcome was more complex. The messiness of the English Reformation and the complexities of England’s constitutional history made sure of that. And we are all the forgetful beneficiaries.

More than a Religious War

For a full picture, read Kevin Phillips’ masterful popular history, The Cousins’ Wars. In it, he makes clear that many non-doctrinal issues divided the supporters of Stuart kings Charles I, Charles II, and James II from backers of parliamentary supremacy. Royalists did tend to be Catholics and high-church Anglicans, while Parliamentarians were dominated by various shades of Calvinists, congregationalists, and outright separatist Protestants. Of course, the first English colonies in New England were founded by such Protestants.

As in France a hundred years before, nobody in the English conflict was fighting for religious liberty as we know it. Each side (including the Catholics living underground or in Ireland) was competing to place someone of its persuasion in power, then to use the State to pressure the rest of the population to conform. It was only the repeated failures of various factions to achieve this outcome that led to toleration, then protection, of religious minorities — as a “least-bad” outcome preferable to ongoing civil war. Our American religious settlement would prove to be an outgrowth of what worked in England.

But other social and economic factors marked the sides in the English struggle for power. Those who favored a powerful king with his own source of funds, not beholden to Parliament, tended to be rural, aristocratic and peasant. Both high-church (ritualist) Anglicans and fitfully persecuted Catholics sided with the monarchy in its struggle against the House of Commons. The Commons, by contrast, was dominated by urban dwellers, merchants, “new men” who expected their wealth to grant them concomitant political power. This would often come at the expense of aristocrats and farmers. So the battle in England was regional, occupational, and political as well as being religious.

The English Exception to Absolutism

In most European countries, Catholic and Protestant, the 17th century saw the successful imposition of potent central monarchies — royal regimes that gained power at the expense of aristocrats, the church, and medieval representative bodies such as parliaments. In France, Spain, Prussia, Sweden, even Russia, royal power grew steadily, as if it were a natural and necessary process. Autocratic monarchies were the “progressive” wave of the future, making possible the marshalling of national power and economic growth.

England was one of the great exceptions. Henry VIII in founding the Church of England had undoubtedly strengthened the power of the throne. But he and his successors had also planted time bombs that would tick away over the decades. Retaining most church ritual and structure while making room for Calvinist theology may have seemed like a clever political compromise to Queen Elizabeth I.

But the Church of England created to serve the royal regime was neither Catholic fish nor Protestant fowl. Instead, it was a battleground between those with quasi-Catholic understandings of theology, and fiercely Calvinist reformers, both of them enrolled in the very same church, which claimed a national monopoly.

Conservative scholar Russell Kirk has pointed out, in his indispensable history America’s British Culture, a powerful irony that has had profound implications for all English-speaking countries: The most radical British Protestants would look to medieval precedents and institutions for legal arguments to frustrate the power of monarchs whom they viewed as both too powerful and too pro-Catholic. This meant that medieval arguments for the separation of powers, of Catholic origins, found themselves built into Protestant polemics.

This would ultimately yield, in America, a situation of unprecedented freedom for churches and individual believers, which even the papacy would recognize. The U.S. was the first country in centuries where the Vatican could choose bishops freely, without government meddling. As Samuel Gregg recounts in Tea Party Catholic, the U.S. Congress in 1789 was puzzled when a letter arrived from the papal secretary, seeking permission to appoint the first Archbishop of Baltimore after the American Revolution. Congress wrote back, explaining that it had no power or wish to interfere.

In the next installment, I will trace the specific arguments from medieval and other sources that Parliamentary supporters cited in defense of restricting royal power, and how the final settlement of the English Civil War in 1690 cemented forever the link between religious liberty and gun rights for citizens.

Who Were the Persecutors During the Reformation? Here’s the Bad News: Everybody