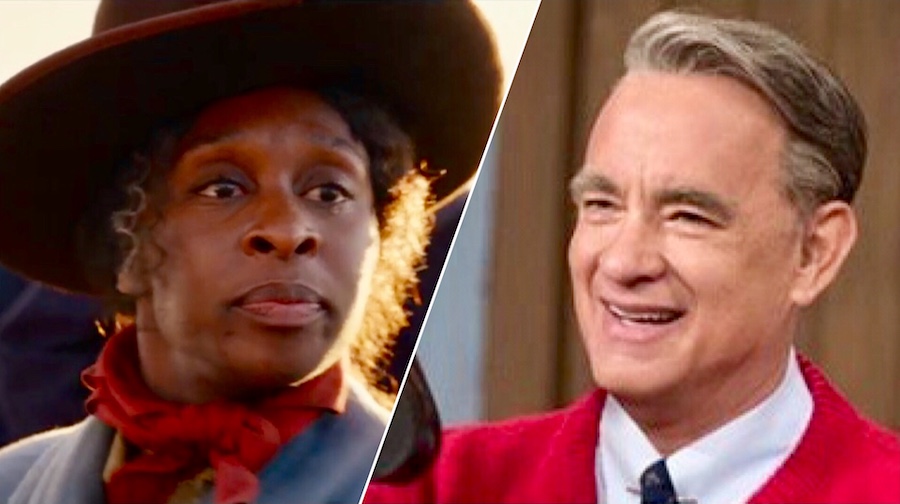 2019 has already been a banner year for films that spotlight true stories of faith, justice, and making a difference. This week, trailers landed for two very different biopics of American icons coming this fall.

One tells the story of Harriet Tubman. She bravely escaped slavery in the early 1800’s then worked with determination to free others. The other spotlights the later years of public TV icon Fred Rogers. He taught children for decades through his educational show.

Both films open in theaters this November. (Neither has yet been rated.) In both cases, the central figure’s Christian faith plays a key role in their life stories. This distinctive also describes four other biopics released in theaters this year.

Community activist Ann Atwater leaned on her faith during civil rights struggles in The Best of Enemies. The Smith family of St. Louis, Missouri sought a miracle in Breakthrough. And former Planned Parenthood director Abby Johnson was transformed after an Unplanned encounter she considers divinely inspired.

A biopic was also released on J.R.R. Tolkien, renowned British author of The Lord of the Rings. However, the film Tolkien was widely criticized for how it marginalized any mention of his Catholic faith.

Visions And Dreams of Freedom

According to sources close to the film, it does not shy away from her faith. “Tubman describes visions and dreams she received from God, guiding her and her followers to safety,” stated one insider.

Reportedly, the film covers more than her dramatic escape from slavery and involvement as a conductor on the Underground Railroad. During the Civil War, Tubman became a spy and armed scout for the Union Army.

Her place in America stands so tall, a Treasury Department commission recommended Harriet Tubman replace Andrew Jackson on the $20 dollar bill. However, bureaucratic delays have stalled this change until 2028. Moviegoers only have to wait until November 1 to honor Tubman’s legacy by watching her story unfold.

Let’s Make the Most of This Beautiful Day

In a trailer already viewed by tens of millions online, Oscar winner Tom Hanks portrays Fred Rogers in A Beautiful Day in the Neighborhood.

Rogers considered television his ministry, as his friend Reverend George Wirth recounted in an interview. “Early in our friendship, he made a profound statement,” said Wirth.

“Speaking of children who heard him through television, he said: ‘Between my mouth and those who hear, that space is holy ground.’ He believed God took his words and blessed them as they are on their way to the hearing audience.”

Wirth appeared alongside Rogers’ widow Joanne, their sons, and other close friends in last year’s hit film Won’t You Be My Neighbor? It ultimately earned $22.8 million at the box office, making it the 12th most popular documentary of all time.

The upcoming Beautiful Day biopic dramatizes a 1998 Esquire cover story about Rogers. It comes from director Marielle Heller, known for darkly comic drama Can You Ever Forgive Me? about a forger caught in her falsehoods.

Whether the film will mention Rogers’ faith remains to be seen. (The feature article briefly mentions the church he attended.) A Beautiful Day in the Neighborhood opens on November 22, the Friday before Thanksgiving.

This year’s hits and misses in biopics give a clear read on audiences. They are watching whether film adaptations get the story right.

Explore The Stream’s films coverage, and sign up to receive top stories every week.