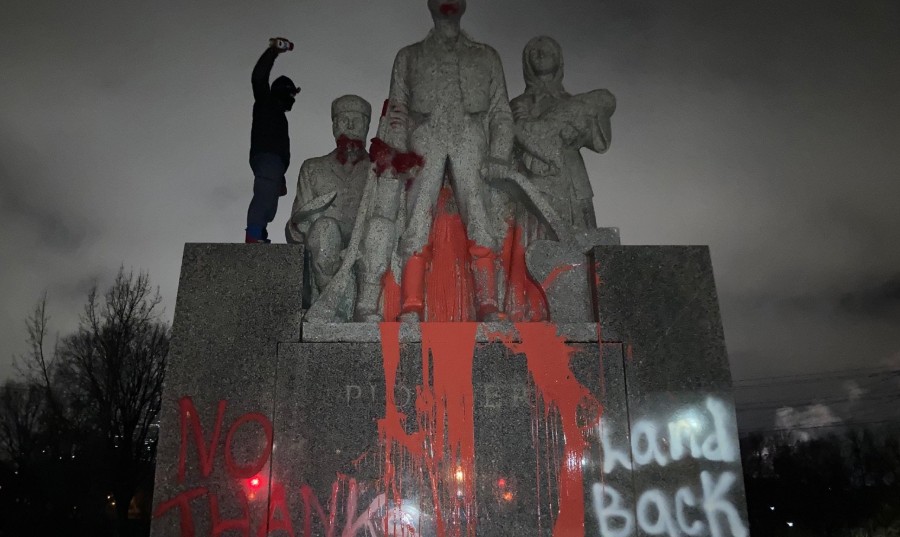 Last week we celebrated Thanksgiving, but is this holiday becoming so politically incorrect that one day it will be doomed to be sent down the “memory hole”?

There is a war on American history. Over the Thanksgiving weekend, Antifa and other leftwing groups toppled more historical statues. Tyler O’Neil of PJ Media describes the extent of this vandalism, which included the spray-painting of anti-Thanksgiving messages and statues torn down in Chicago, Minneapolis, Portland and Spokane.

This weekend’s vandalism, of course, comes a few months after the toppling of all sorts of American historical statues, including Washington, Thomas Jefferson, Ulysses S. Grant and even abolitionist Frederick Douglass. The war on America as founded continues unabated.

One of the emphases in last week’s new spate of American history-bashing seemed to focus on a grievance of some Native Americans. There was a push for what they called “a national decolonial day of action” and what they called “land back.”

America has never been perfect. Injustices have been done. On the other hand, we have made great strides to address many of these past sins. Meanwhile, notes O’Neil, “the nefarious message of Marxist critical race theory suggests we should upend society in order to satisfy historical grievances in the name of racial justice. This toxic vision undermines the very real progress America has made in terms of establishing civil rights regardless of race and in terms of securing broad prosperity through a free market economy.”

Recently, I spoke with a Native American pastor to get his thoughts on the Pilgrims and American history for a television documentary. Rev. Billy Falling, author of My Cherokee Roots, does not agree with those who denigrate the founding of America for all the bad things that did indeed happen — later (long after the Pilgrims) — to Native Americans.

Falling added, “As a Native American, I thank God for the Europeans that brought us the Gospel and brought us Western Civilization.” He said that the Indians need the Gospel as much as any group of people:

We owe everything to those who brought us civilization and brought us out of the cannibalism and out of all of the sins of the flesh that were practiced in the day just like the heathen of the world. It’s hard today to find a ‘sweat’ where you can go as a Native American and go inside and ‘smoke out your sins,’ but it’s easy to find Native Americans in any congregation in the United States, worshiping the Lord Jesus Christ because of the Europeans. And I thank God for that.

The war on American history does not bode well for our future. Tens of millions of young Americans are brainwashed into thinking America is evil and always was evil.

Can We Convince the Next Generation that Our History is Worth Preserving?

In his nightmare vision of a totalitarian future, “1984,” novelist George Orwell speaks of history constantly being rewritten by the state in order to satisfy those in charge. That history which was no longer acceptable to the Party was sent down the “memory holes” where it was to be burned away in “the enormous furnaces which were hidden somewhere in the recesses of the building.”

Those of us who appreciate what God has done in the creation of America have a lot of work on our hands to try and convince a lot of young Americans who have been brainwashed by Marxist assaults on American history in our schools that our history, flawed as it is, is worth preserving.

Golda Meir, former prime minister of Israel, once noted, “One cannot and must not try to erase the past merely because it does not fit the present.”

Those of us who appreciate what God has done in the creation of America have a lot of work on our hands to try and convince a lot of young Americans who have been brainwashed by Marxist assaults on American history in our schools that our history, flawed as it is, is worth preserving. Abolish Thanksgiving? No thanks.