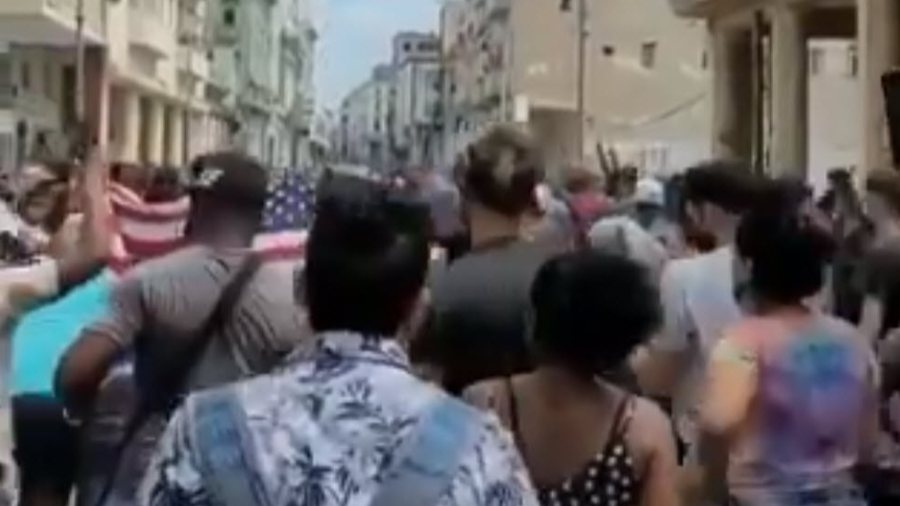 Flying American flags, yelling “freedom” and “liberty,” Cubans by the tens of thousands took to the streets in what is being called the largest demonstrations on that imprisoned communist island in fifty years.

They are showing “patria y vida” … or “homeland and life” … contrary to the communist regime’s slogan of “homeland or death.”

“We have NEVER seen a day like today in #Cuba,” tweeted Sen. Marco Rubio.

And the reaction of the Biden State Department to this cry for freedom? The protests are because of “concern about rising COVID cases/deaths & medicine shortages.” You can’t make this up.

Peaceful protests are growing in #Cuba as the Cuban people exercise their right to peaceful assembly to express concern about rising COVID cases/deaths & medicine shortages. We commend the numerous efforts of the Cuban people mobilizing donations to help neighbors in need.

“We stand with the Cuban people and their clarion call for freedom and relief from the tragic grip of the pandemic and from the decades of repression and economic suffering to which they have been subjected by Cuba’s authoritarian regime. …

“The United States calls on the Cuban regime to hear their people and serve their needs at this vital moment rather than enriching themselves.”

This dismissal of the Cuban protests as mere venting over COVID issues isn’t sitting well with Cuban-Americans. Rep. Carlos Gimenez, who was born in Cuba, calls the State Dept. “totally deranged.”

The Biden Admin is totally deranged on #Cuba policy.

This isn’t some pesky protest over COVID vaccines. This is about opposing a brutal communist regime, freeing political prisoners, and demanding free elections.

If you can’t make that distinction, you are very bad at your job. https://t.co/pjWzLpEbpY

“COVID is the icing on the cake here because you have a socialist regime that says to people, ‘You have no freedom. You have no independence. You have no ability to speak freely, but you have a really good health care system.’ They don’t!” Rubio said.

Of course COVID has a role to play, but this began well before COVID. These people are frustrated. They want to live in a normal country Why can’t the State Department, why can’t the White House just say it clearly: This is not about COVID, this is not about anything else! This is about freedom — say it!

Well, we know why they can’t say it. Because people of color waving America flags shouting for liberty is about as un-Biden Administration a thing you can imagine. And because day-by-day this Administration is pushing the same Marxist ideology that has imprisoned Cuba for over 60 years.

In a follow-up, Chung again sidestepped the protesters’ calls for freedom from the Communist dictatorship. “We stand by the Cuban people’s right for peaceful assembly. We call for calm and condemn any violence.”

As The Blaze noted, “The Cuban people, of course, do not have a right to ‘peacefully assemble’ in their homeland.”

Higher up the ladder, National Security Adviser Jake Sullivan also was also tepid in his support of the protesters. “The U.S. supports freedom of expression and assembly across Cuba, and would strongly condemn any violence or targeting of peaceful protesters who are exercising their universal rights.”

Violence is what you can expect. Cuban President Miguel Diaz-Canel is unleashing the dogs. “We are calling on all the revolutionaries in the country, all the Communists, to hit the streets wherever there is an effort to produce these provocations.”

In a national address, Diaz-Canel said, “We are prepared to do anything. We will be battling in the streets.”

Sen. Ted Cruz condemned the regime, which he declares will be confined to the “dustbins of history.”

“It has brutalized & denied freedom to generations of Cubans, and forced my family & so many others to flee,” he tweeted. “The American people stand squarely with the men & women of Cuba and their noble fight for liberty.”

Ah, but does the current American government?

Please join The Stream in praying for the freedom-seeking people of Cuba, and the safety of all who are protesting.