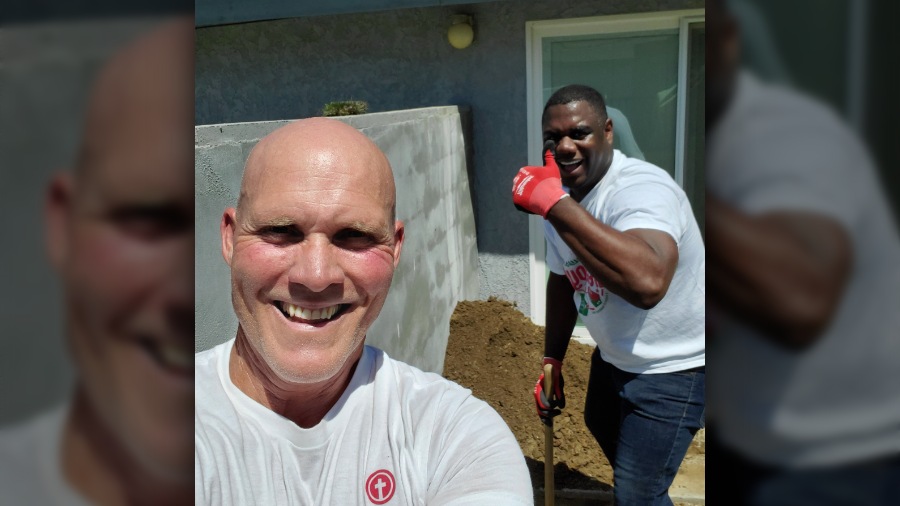 Martin Luther King Jr., in the Letter from Birmingham Jail on April 16, 1963, wrote, “We will have to repent in this generation not merely for the hateful words and actions of the bad people but for the appalling silence of the good people.” I hold the same opinion today.

The above image is of our associate pastor, Abram Thomas, and myself building a shade area for the children’s ministry. This is what unity in Christ looks like: working side by side for a greater cause while putting personal agendas, upbringing and culture aside. We are all Americans. More importantly, we are Christians. We are in this together. Our future and our children’s futures are at stake.

Evil forces are seeking to dismantle us by destroying our unity. (Sermons on this can be found here.) Christians need to speak up against all forms of racism and injustice when they see or experience them. “Neutrality helps the oppressor, never the victim. Silence encourages the tormentor, never the tormented” (Elie Wiesel, Holocaust survivor).

Sadly, we are now at the point where if you don’t agree with someone you are called a racist. Many pastors and leaders have fallen for the deception, some even almost apologizing for being white. Yes, you heard me correctly. I’m alarmed at the silent shepherds and those pastors fueled by anger. It appears that most are putting culture before Christ. The social gospel (which is no gospel at all — as Paul makes clear in Galatians 1:9) brings rage, division and self-loathing. The true gospel brings peace and unity. Read the article on the sin of silent pastors here.

There is a huge divide in the Christian community over the Black Lives Matter movement and organization. No matter what black leaders such as Ben Carson, Voddie Baucham, Larry Elder, Bishop Harry Jackson, Candace Owens and Marcus Rodgers say about the negative effects of BLM, Inc. it doesn’t seem to matter. The Holy Spirit is not divided, so where is the division coming from?

We honor the phrase “black lives matter” because they do matter. We actually take it a step further, though, and say #AllBlackLivesMatter and should be honored, from the prevention of innocent children being killed in the womb to the protection of innocent black people and police officers. We want to calm the flames of racism rather than add to them. But we must look at the foundation of what we are promoting since the ends do not always justify the means. Ryan Scott Bomberger, a black community activist, wrote a powerful article here regarding the foundation of Black Lives Matter.

All of this begs the question: Can’t we care deeply for innocent black lives without agreeing with the BLM organization’s agenda? Yes, of course we can, but that doesn’t fit the agenda of those funding and pushing the movement. Their goal is not reconciliation but retaliation. Why not start a movement that focuses on all black lives and centers around reconciliation, restoration, and forgiveness versus Marxism, retaliation, and rage? We are commanded to love one another and to remember that vengeance belongs to the Lord alone (Leviticus 19:18, Romans 12:19).

The plea of many of us caught in the middle — black and white — is that we should not promote an organization that seems to be promoting a new civil war. These are not my words but those of many of my black friends. One BLM leader has even said, “If this country doesn’t give us what we want, then we will burn down the system,” and another co-founder tweeted about killing “men and white folks.” Racism is on both sides. How can any Christian support that, and how can any pastor endorse it?

At the core, this problem is not a skin issue but a sin issue. Hatred is colorblind — it infects people of every tribe and tongue and nation. The only solution is redemption and forgiveness through Jesus Christ. Many law enforcement officers are being radically changed by the gospel, as are those who had participated in sparking civil unrest. This is where our focus must be. America, overall, is being humbled by God. I’m optimistic because these are often the seeds of revival and renewal on a massive scale.

Sadly, those who do not forgive or release bitterness, anger, and hurt never experience freedom, happiness, or true restoration. Ephesians 4:31-32 encourages us to “let all bitterness, wrath, anger, clamor, and evil speaking be put away from you, with all malice. And be kind to one another, tenderhearted, forgiving one another, even as God in Christ forgave you.” Without this change of heart, hope is elusive.

Advocates of the lie of “separation of church and state” have held Americans in bondage for far too long. How much longer will we allow their godless agenda to remove God from America? God’s Word must be allowed in all areas, from police precincts to government offices, and from schools to inner cities and state prisons. We need spiritual reform more than social reform. In fact, social reform cannot really happen unless the hearts of individuals that make up that society are changed. Only God can change a cold, unforgiving, bitter heart of stone into a warm, hope-filled heart.

We must stop walking on the eggshells of political correctness, and stop seeking collective redemption from the world. God is our only hope! We must repent of personal sin and seek Jesus for personal redemption. He changes us from the inside out, and in turn we change the world around us, sharing with others what God has given us — the peace that surpasses all understanding (see Philippians 4:7).

What If We Looked Through a Different Lens?

As I continue to read the news feeds, my heart immediately goes out to the children being raised in today’s environment (many with no fathers to guide them) viewing this world through the lens of hopelessness and fear presented in every form of communication around them. But what if we looked through a different lens — a biblical lens?

Focus on the Cross

As Christians, we are truly caught in the middle. We are not identified by our skin color but by our identity in Christ. My heart breaks for the atrocities that have happened in humanity’s past, but in each of these seasons, good men and women, many of them Christians, rose up to make a difference. We must focus on the cross, not on cultural identity.

We must not allow the forces of hell to shake us. We must be different, think differently, and walk differently than the rest of the world.

The media circus will only get worse. In a land of approximately 330 million people, many of them lost, without God, and without hope (Ephesians 2:12), we will continue to see unspeakable acts of violence as video footage is released on a constant basis. We will see hoaxes portrayed as hate crimes, legitimate hate crimes portrayed as “justified,” and right will be called wrong and wrong will be called right, all in an attempt to fuel division and fear. But we cannot allow this to cause a knee-jerk response and act in ways that would cause the name of Christ to be blasphemed. Nor can we retreat from the battle and walk on eggshells in fear. We need real Christ-centered and Spirit-filled unity.

We must not allow the forces of hell to shake us. We must be different, think differently, and walk differently than the rest of the world. We must show the beauty, compassion, grace, justice, and love of Christ to those around us — to our neighbors, our friends, our co-workers, and the stranger in the grocery line — without regard to the color of their skin.

In short, brothers and sisters, we must be the true Church.